Topics include Transportation, Things to Do, Dining Scene, For Foreign Visitors & more! 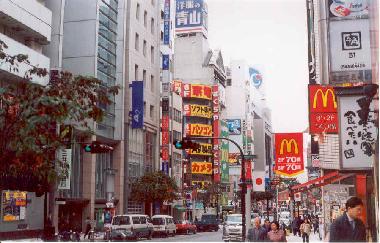 Many Americans have asked around in different message boards and newsgroups on the Internet about food in Japan. Some people like Japanese food and some don't. If you are planning a trip to Japan, whether it is with a tour or on your own, your fears can be put to rest as there are many American restaurants available in Japan, if you want to confine your diet to familiar gastric delights or just take a break from Japanese dishes.

There are several American chains in the Tokyo area, as well as in most major cities. McDonald's is located almost everywhere (no, it doesn't cost ten bucks for a Big Mac).  There is a Denny's Restaurant in Shibuya as well as a Burger King.  There's also a Denny's in Asakusa.  For you coffee addicts, there are many Starbuck's coffee shops all over Tokyo (they like their java too).  Underneath the train tracks separating Hibiya and Ginza, there's a coffee shop called Becker's, which has excellent coffee as well as hamburgers.  To go along with your coffee, there are many donut shops around too.

There are also T.G.I. Friday's restaurants in Japan (8 in Tokyo, plus Osaka & Nagoya), and they are just as noisy as the ones in the states.  If you have a desire for Colonel Sanders, there are KFCs (Kentucky Fried Chicken) stores all over Japan, too.  Many of them have a statue of Colonel Sanders in front of the store, sometimes dressed in a kimono.

If one checks around in Japan travel websites, it would be noted that there are other cuisines that can be found, including Chinese, Indian, Mexican, and Italian food. There's even AM-PM mini-marts here and there, and plenty of 7-11 convenience stores around.

So, if you are reluctant about making a trip to Japan due to dietary concerns, don't fret!  You can still consume an American meal in Japan.