Topics include Transportation, Things to Do, Dining Scene, For Foreign Visitors & more!

The national rail network In Portugal is operated by CP – Caminhos de Ferro Portugueses. Their website is at www.cp.pt and you can see most of the site in English by clicking on the little 'flag' at the top of the page.

There is a good map of the Portuguese rail network at  http://www.bueker.net/trainspotting/m...

The complete timetable for Intercity trains in Portugal can be viewed and downloaded here. Note that some routes and cities also have Inter-regional and regional (slower) trains. Visit the CP website for those times.

Alfa Pendular high-speed tilting trains operate many of the services between Lisbon and Porto.

The website offers an on-line reservation facility for ALFA and inter-city journeys. Reservations open 30 days before travel and includes a 'print your own ticket' facility. Reservations are essential for all inter-city travel. You can often get a seat at the last minute, but there is always a risk of the train being full and your being unable to travel at your preferred time. All major stations have ticket machines for Longo Curso (long distance) travel in which you can use your credit card.

The major routes and many of the minor ones are electrified. Modern air-conditioned equipment is used throughout. There are two classes of travel, Confort and Turistica, equating to first and second class. First class often includes at-seat meals (extra cost), sockets for laptops etc.

The line between Lisbon and Porto forms the backbone of the inter city rail system. Trains ( a mixture of ALFA and Intercity) run about once every hour every day of the week, with ALFA trains covering the distance in 2hrs 35 minutes. Intercity trains make the journey in 3 hours. Other inter-city  trains link Lisbon with regional centres. All inter-city routes are served two or three times a day at least. The route from Lisbon to Faro and the Algarve has five daily trains, six in summer, two of which start or end their journeys in Porto.

Inter-regional and regional (local) trains fill in the gaps, but services are irregular and sometimes infrequent. Most trains are fairly new but especially down south in the Algarve, it has seen better days.

Large areas of the country however have no rail service at all.

Much of the network, including several picturesque narrow gauge lines, was closed in the early 1990's. Buses (see below) are now the only way to get to and around these areas.

One narrow gauge gem still open is the Linha do Vouga. 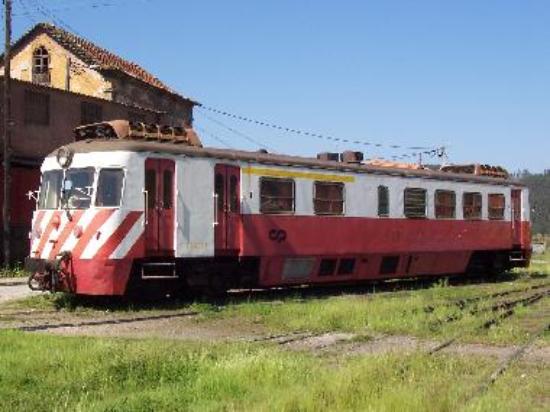 This takes a tortuous inland route between Aveiro and Espinho. it is operated by CP, the national operator. The timetables are on the CP website, but such is the service (it is operated frequently at both ends but only twice a day in the middle) that it is just about impossible to travel the whole length of the line in the same day.

The narrow gauge line between Regua and Vila Real is (May 2009) closed for regular passenger service. Buses have replaced trains indefinitely. This is a  branch line off the Douro valley line, which runs east out of Porto along the Douro river to Pocinho. The Tua - Mirandela narrow-gauge line is also closed indefinitely, except for the short section between Cachão and Mirandela. Taxis are provided to convey passengers over the majority of the route.

Good networks of mainly electric suburban trains (Urbanos) operate around Lisbon and Porto, connecting those cities to towns up to about an hour's journey away.

Fares are very cheap by, for example, UK standards and those of most of western Europe. On the 'Urbanos' systems a typical 1 hour journey will cost about €2 - ticketing on these systems is becoming integrated with local trams and buses, so some real bargains can be had.

In Lisbon, Fertagus (a private company) operates the suburban service between Lisbon, Pinhal Novo and Setubal over the spectacular 25 April bridge across the Tagus. Their ticketing is NOT integrated with CP and they have their own ticket offices and machines at all jointly served stations. They use double-deck trains, good for sight-seeing.

Portugal is almost isolated from the rest of Europe in passenger railway terms. Plans to link Portugal to the European high-speed newtwork will not come about for a very long time in the future.

Meanwhile, there are only four trains of any description between anywhere in Portugal and anywhere in Spain. These are:

Two daily round-trip journeys operate between Porto and Vigo. These run in daytimes.

The overnight Sud Express runs between Lisbon and Hendaye (France) through Coimbra, Salamanca, Vallodolid, Medina del Campo, San Sebastian and Irun. The journey takes 14 hours, leaving Lisbon at around 4pm and Irun at 1030pm. Reservations are essential and for this route they are available 60 days before travel but not on-line.

The Lusitania Tren-Hotel runs overnight between Lisbon and Madrid. This journey takes about 10 hours and again reservations are essential.

There is a tempting near link up between Portuguese and Spanish systems at Elvas and Badajoz, but passenger trains no longer cross the border. The gap of 25km/16 miles has to be filled by taxi, as there are only a couple of buses a day.

In the Algarve, there is no connection at all between Portuguese and Spanish rail systems.

Long-distance buses connect every large city and town, as well as many smaller locations all over the country. There are many operators, some of whom do not have websites. Advance reservation is highly recommended wherever possible. You may have to go to the local bus station to do this. If possible, go a day or two before you wish to travel.

Some of the major companies have united under the brand Rede Expressos. Their website offers direct and indirect services between almost every major city and smaller towns across the country. Online reservation is available through their website, but keep in mind that in Lisbon and Porto there are more than one bus terminal. Rede Expressos uses the Sete Rios coach station in Lisbon and Garagem Atlântico terminal in Porto, located downtown. Rede Expressos proposes discounts for youths between 14 and 29 years old.

Rodovaria do Norte has a network mainly in the north of Portugal.

Rede Expressos, ALSA and several other companies run services to and from various Spanish cities.

Buses and Light Rail/Metro in Cities and Major Urban Areas

The major cities have good bus networks within the city and suburbs, often provided by different operators. Ticketing is becoming integrated, with various passes and cards available. These can be of great value to travellers as they save money  as well as time. Many of these tickets are re-chargeable, so don't throw them away! In Lisbon and Porto the integrated ticketing scheme is being extended to include suburban rail and metro/light-rail networks.  Like anywhere, these buses can be very crowded during rush hour or during special events.

All buses and trams accept cash and in almost all cases change is given. However, try to find out the exact fare to avoid delaying the bus or, better still, buy a pass which will also save you money.

Lisbon's city buses and trams are operated by Carris. The Lisbon Metro has as separate website - the metro network now includes the airport.

Cascais, Estoril, Sintra and the surrounding area are served by the buses of Scotturb

Many of Lisbon's northern suburbs are covered by the Rodoviaria de Lisboa company, Vimeca  and Mafrense.

Ferries are important in Lisbon, crossing the Tagus linking the city with the suburbs across the river. There are two operators, Transtejo and Soflusa

South of the river the Sultejo company operates local services including buses across the bridge to/from Lisbon.  There is a new light-rail network developing in this area operated by Metro Transportes do Sul.

Porto's city and suburban buses are operated by STCP. Porto also has a Metro light rail/tram network, which includes the airport.

Away from the major towns and cities, much of Portugal has a very low density of population. This reflected in the bus services, with many smaller towns and villages having only one or two buses a day, to fit in with schools and shopping. Many areas have no buses at all at weekends.

There are many operators around the country. Enquire at the local tourist office, bus station etc for information.

Around the popular tourist desination  of the Algarve, buses are mainly operated by EVA.  A sister company, Frota Azul, operates a few routes around Portimao. There is an unofficial  website with Algarve bus info, including detailed information on all public transport in the Algarve region.

Other bus companies include: