Topics include Things to Do, Dining Scene & more!

The national currency of Mexico is the Mexican Peso;  and Banco de Mexico is the nation’s central bank,  issuing coin and paper money which is legal tender.  Prices throughout the country are commonly shown with a dollar-sign ($) in front of the Peso amount;  and although in some parts of the country businesses willingly accept U.S. dollars,  it's almost always more advantageous (less expensive) for travelers to pay with Mexican Pesos.  Likewise,  certain people on the receiving end of your payment (e.g.  waitstaff,  bartenders,  chambermaids,  et cetera) generally prefer Mexican currency,  to save them the inconvenience of a trip to the bank or a stop at a cambio on their day off. Remember there is a difference between the sell rate and the buy rate so your foreign currency tip will be worth less than intended.

Always try to use larger bills first,  as it's often difficult to find change when you need it.  Don't get stuck trying to pay a 40-peso cab fare with a 200-peso bill  -  and a driver who says he doesn't have enough change.]  Two other points worth mentioning:  (a) U.S. coin-money has no value in Mexico and is not an acceptable form of payment anywhere,  and (b) when paying with U.S. currency,  any change you receive back will be in Mexican Pesos.

On a related topic,  it's also strongly advised that travelers call their bank(s) and/or credit-card companies prior to departure  -  to inform them of their impending travel plans.  Failing to do so,  some travelers may quickly learn that the use of their card(s) has been restricted or suspended  -  once charges from Mexico appear  -  to help protect them against fraud.  One should also be aware that  'foreign currency transaction fees'  and/or  'ATM withdrawal fees'   may be incurred when using either type of card.  It's best to ask your bank(s) and credit-card companies,  in advance,  about their fees (which usually range between 1%-3%,  but could be higher) and make comparisons prior to traveling.  FYI:  Some banks which are affiliated with (or owned by) Mexican banks impose no  'ATM withdrawal fees',  or a minimal charge (less than a dollar per transaction);  but each has its own rules and regulations  -  and some may limit the number of foreign withdrawals before fees are imposed.  Two examples of U.S. bank affiliations would be CitiBank with Banamex  -  and Bank of America with Santander. For Canadians Scotia Bank abd HSBC have Mexican affiliates.

For some additional clarification about ATM-cards versus debit-cards and which credit-cards are locally accepted,  travelers might also benefit from the following.  In simple terms,  ATM-cards can ONLY be used for cash withdrawals from ATMs.  They are not linked to VISA or MasterCard and cannot be used as a credit-card for purchases.  Ergo,  if one's ATM-card goes missing,  it's useless  -  without the proper PIN  -  to anyone else.  On the other hand,  a bank debit-card (which serves a dual purpose and is common elsewhere but not for Canadians as yet) is usually tied to a major credit-card name as well as a personal checking or savings account  -  and can potentially be used for purchases by anyone who finds or steals it.  Should this occur,  a traveler may run the risk of having his/her bank account emptied out  -  with no recourse for recouping those funds.  It is therefore  'best'  NOT to travel to Mexico with your bank  'debit-card'.  Canadians will need to learn that the terminology of debit-cards and ATM cards differs from the USA terminology. As for paying with major credit-cards in Mexico,  most business establishments accept either VISA or MasterCard  -  and some (though fewer) will honor American Express.  Discover hasn't yet become an acceptable card;  and don't expect to be able to use your foreign WalMart credit-card either.  Keep in mind,  too,  that although the majority of businesses will accept plastic payments,  certain local restaurants,  many smaller stores and eateries,  taquerias,  cabs and buses,  and most private drivers and tour-guides take  'cash only'.  Places which don't take credit-cards,  especially restaurants,  often post a sign which reads  'Lo Sentimos - No Tarjetas de Crédito'  (Sorry - No Credit Cards) or have it printed on their menus;  but it's always best to inquire.

The use of Travelers Cheques may have waned over the years,  but some folks still  'don't leave home without 'em'.  The number of local businesses still honoring them can be very hit-or-miss and it is not recommended to rely solely on this method for getting money.  Fewer and fewer banks and hotels will cash them now, although there are still a small number of Casa de Cambios that will.

Other precautions regarding ATM-,  debit-,  and credit-cards  -  which some travelers heed  -  is to (a) make a photostat copy of your cards,  front and back,  and (b) obtain and record corresponding  'direct-contact'  telephone numbers for the card-companies  ...  in the event that your card(s) are lost or stolen.  Store this information with your passport  -  in a locked luggage compartment or hotel safe.  FYI:   Most  toll-free company phone-numbers which you'd normally dial from home cannot be accessed from Mexico  -  and you should therefore request special contact numbers.  Alternately,  some travelers prefer to email a copy of this information to themselves,  making it more easily accessible from wherever they may happen to be.

It is also highly recommended that when using ATMs that you always get a receipt of your transaction and keep it, in case there are problems or discrepancies.  This is your record of the transaction and your bank will want that information if there are disputes.

The current Mexican-Peso coins and notes in circulation are as depicted below: 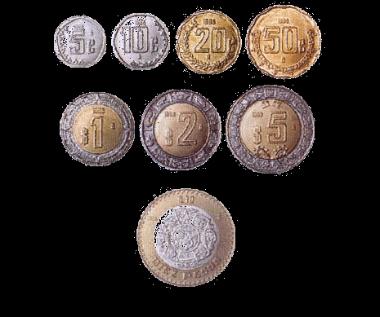 Buying Mexican Pesos in the UK

1 GBP is worth approximately 25 MXN according to Compareholidaymoney.com. Mexican pesos are widely stoked by most UK currency providers, which means competition is healthy and there are some good deals to be found if you are prepared to shop around a little. Avoid the obvious places like airports and banks as they offer very poor exchange rates and often charge added commission or admin fees. ASDA, Tesco and M&S offer pesos at selected travel money branches with good rates, but the best rates are usuall found online. One tip: if you plan on ordering your pesos from the Post Office, order online via their website, DON'T walk in off the street! You'll be given a much worse rate.