Coral Reef Club
Lowest prices for your stay
Lock in the lowest price from these sites
US$548
US$442
Reserve now, pay at stay
View deal
Hotels.comUS$548
Expedia.comUS$547
TripadvisorUS$442
Priceline
Orbitz.comUS$548
eDreamsUS$442
View all 16 deals
Prices are provided by our partners, and reflect nightly room rates, including all taxes and fees known to our partners. Please see our partners for more details.
Payments made by partners impact the order of prices displayed. Room types may vary.
katzathome
London, United Kingdom
1412

We were recommended to the Coral Reef Club by good friends and were delighted on arrival to find an attractive room on a beautiful stretch of beach. Unfortunately, children are not really welcome in the restaurant and are forbidden from watching the evening music shows. The hotel are perfectly happy to charge over $2,000 per night for a family cottage but that’s were the welcome ends. The elderly proprietor, Cynthia, seems completely out of touch with how to deal with a young family and opted to rudely ruin our otherwise pleasant evening by asking us to leave when we were quietly watching the singer perform after supper. We expected when she came over to our table it was to apologise for the poor service we had received with our waiter bringing the wrong food order on 3 occasions in the same meal (a complaint we have had to make on several other occasions in our stay so far). Her complete lack of grace has left a sour taste in our mouth and we will certainly not be coming back to this hotel or recommending it to others. It is a real shame, particularly in the current environment, that the mantra of the customer always being right, falls far short in this establishment.More

Thank you for your review and for your complimentary comments about the welcome you received upon arrival, our accommodation and our beach. We deeply regret that the exchange that occurred with regards to your children that then undid that good feeling. We are a family owned and run business and my mother's intention was really to make you aware of the 2 concerns we have when children run around the restaurant albeit playfully. Foremost it is safety in that they might knock into wait staff carrying heavy trays and the second is consideration for our other diners. It is most unfortunate that the delivery was not sensitive and for that we sincerely apologise. It is sometimes difficult to please everyone in these situations and regrettably we did not find the right balance when passing on the message in this instance. It is never an easy message to receive, particularly if you are having a lovely time and your feeling is that it is unnecessary.

We also regret the poor service you experienced in the restaurant, mistakes like that should not be made and we are sorry our service at that dinner fell short.

We are acutely aware of how challenging travel is in these difficult times, and your family would have made a big effort to travel to Barbados and stay with us at Coral Reef. Knowing this makes it all the harder to learn of your disappointing encounter. Our aim is to make our guests as happy as can be, surpassing their needs whenever possible. We unreservedly apologise and do hope can perhaps understand the intention of our family and our entire team would never have been to make you uncomfortable. If you did choose to return to Barbados and considered staying with us again, we would very much like to hear from you directly as we would be sure to go to lengths to make up for the disappointing experience you had.

Report response as inappropriateThank you. We appreciate your input.
This response is the subjective opinion of the management representative and not of TripAdvisor LLC
See all 575 reviews
Payments made by partners impact the order of prices displayed. Room types may vary.
Nearby Hotels 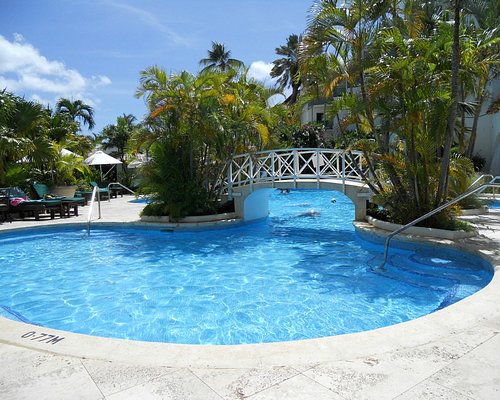 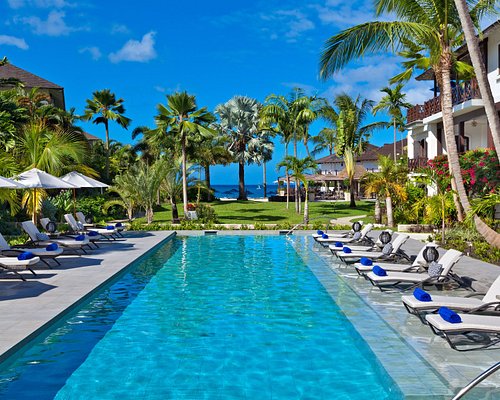 Breakfast included
The Sandpiper
US$442
Booking.com
View deal
Reserve now, pay at stay
Hotels.com
US$401
Orbitz.com
US$401
Expedia.com
US$401
View all 13 deals from US$401
383 reviews
0.5 km from Coral Reef Club
We compared the lowest prices from 13 websites 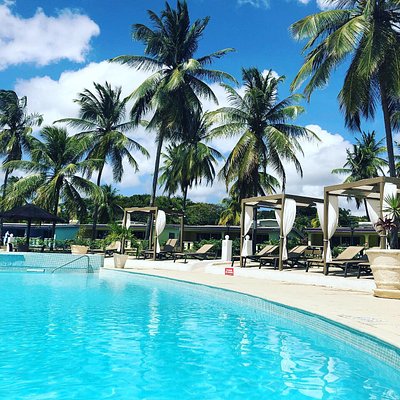 Taking safety measures
We compared the lowest prices from 20 websites
Top Rated
All Inclusive
Tamarind by Elegant Hotels
US$721
US$453
Tripadvisor
View deal
Free cancellation
Pay up to 12X
Booking.com
Hotels.com
US$453
ZenHotels.com
US$721
View all 18 deals from US$453
1,457 reviews
3.3 km from Coral Reef Club

We have just returned from the Coral Reef during these Covid times so thought a bit of info may be helpful for other guests:
- Barbados is a great place to go to at the moment. There is no community transmission of Covid on the island, just a few cases of tourists being positive. However they are firm about masks, sanitising hands and temperature taking in Restaurants, bars, taxis etc which is all fair enough
- hotel organised our second test in our hotel room and we had the results in 24 hours. There are a few designated areas in the hotel that you can use in the first 48 hours, including a pool area, garden area and section of the restaurant, which worked just fine
- with regards to the Hotel itself it is a very attractive, colonial style hotel, in the most fab location on the beach. The coral reef is largely dead but has great snorkelling with lots of fish just by the hotel. The beach boys and water sports is very well run and service excellent
- there were a number of things not on as the hotel was so empty - BBQ/buffet - but on the plus side we got into every restaurant we wanted to go to no problem. There was some evening entertainment, but I think atmosphere is tricky when the UK is in lockdown and there are so few guests
- we thought the service was fine in the restaurant, and the quality of the food was excellent. I think face masks don’t help the staff as it is difficult to communicate at times, and you don’t get that lovely Caribbean smile

All in all we had a lovely time, very relaxing, high quality accommodation and grounds, and just grateful to be on holiday

The entire property, both buildings and grounds, is very attractive, immaculately maintained by an army of staff and spotlessly clean. Housekeeping is first rate and our large balcony was as clean as our room. The quality, sophistication and choice of food in the dining room in the evening and at lunch, cannot be faulted.

Some of the staff were efficient, professional and charming; many were surly, lazy and completely lacked initiative. This was particularly the case in the restaurant. Other guests made the same observations to us.

The hotel is situated right on the beach with its soft sand and warm, turquoise water. It looks idyllic. Beware, within a few feet, the sea bed is covered with rocks, which ruins the experience.

The web site still says there is live entertainment five nights a week in the summer and every evening in the winter. We were there in October. There was a singer one night, a man playing his steel drum on another and a pianist on another. You won’t be enjoying the weekly sumptuous buffet and full choice barbecue promised each week but they are still advertised on the website. There is no floor show either. All these things, appearing on the website as they do, form part of the contract between the hotel and the guests and failure to deliver puts the hotel in breach of contract.

At the same time as we were there a group of four couples and their eight children were also staying. They went around in an inseparable pack the entire time, yelling and screaming, dominating whatever space they were occupying and treating the property as if it were their own home. This included the restaurant and terrace area, causing the staff and other guests to comment. It took several days of complaining for the management to get them to behave. Then they moved to the enclosed, rather small swimming pool area where their behaviour was intolerable and again, the staff made unsolicited adverse comments to us about the noise level. Nothing was done. All this ruined our holiday.

Under Activities on the website, parents are requested to exercise consideration for other guests if their children become noisy in the restaurant and to remove them for a short time. Not only were the children of this group allowed to behave like wild animals, but so were their parents.

5 star service from the team at the Spa during our girls day out. We had our massages and pedis in the stunning outdoor pavilion and topped our day off by lounging poolside. Feeling relaxed and happy. I could do it again tomorrow!

This review is the subjective opinion of a TripAdvisor member and not of TripAdvisor LLC
MishieNad
London, United Kingdom
919
Reviewed 13 April 2020
On one hand amazing but a slight negative undertone

I want to firstly say, this hotel is beautiful, MOST of the staff are excellent and everything was clean etc. On one hand I loved this hotel so so much so I feel a bit sad that it was let down by a few points.

However one thing that left a bit of a bad taste in our mouths were a handful of the staff, these were the older gentleman and women who worked in the restaurant. We are a younger couple (late 20’s) and it sometimes seemed as though they thought we’d won the holiday in a competition or something (as a lot of their clients are older). Their manner could come across as a little bit rude and dismissive, constantly ask our room name (once all 3 of them within 5 minutes! Even though we’d been seated!). There was also an instance with one lady who was extremely short and rude with us and insisted on NOT taking our food order with our drinks order although we let them know were in a bit of a rush that I found bizarre and was pretty rude about it, I don’t remember her name it was something double barrelled. All in all this handful of staff sort of made us feel a bit uncomfortable!

The ladies and gent on reception were excellent and the young boys in the bar, restaurant and round the pool/beach loungers were really brilliant.

I would come again, but I do think this is something the hotel needs to work on!

This review is the subjective opinion of a TripAdvisor member and not of TripAdvisor LLC
M1355JQdavidp
London, United Kingdom
14694
Reviewed 26 March 2020 via mobile
One of the best holidays ever, great hotel

Family run by the second generation of the O'Hara family. Very warm, friendly service, exceptionally tasteful decor, plenty of eye for detail, beautifully landscaped gardens. Of all the places we have visited in Barbados this is the best (20 years experience). The staff were all exceptionally friendly, and very happy (a good sign of good managers and nice people). Rooms are spacious, spread out across the property, and grouped to give maximum privacy. Food is very good, from buffet breakfast, informal lunch (will provide snacks and drinks on the beach too), to the dinners. Monday is a Bajan buffet, and Thursday a BBQ both offered great local and international dishes. Management host a cocktail party every Monday evening. Many people go back year after year, and you can understand why.