Expedia.com
Travelocity
eDreams
View all 12 deals
Prices are provided by our partners, and reflect nightly room rates, including all taxes and fees known to our partners. Please see our partners for more details.
Payments made by partners impact the order of prices displayed. Room types may vary.
Francis T
Guelph, Canada
11440

A haven after a very long road trip

My wife and I arrived at the Auberge de la Providence in Saint Donat in Auvergne after a very long stressful trip driving from Lugano in Switzerland. We arrived much later than we expected, about 9pm. We were hungry but did not think that we would be able to eat that night. Eric, Caroline, Charlie and Truus made us very welcome and told us that we could have dinner as soon as we were ready. Little did I think that we would eat one of the best meals we had eaten in a long time (including some fancy places in Switzerland). The lentil soup was amazingly tasty. Our salad came straight from the garden. The beer I drank was from Belgium but even better than beers I had in Belgium a few weeks earlier. The Inn itself has 4 bedrooms, simple and very comfortable. Each bedroom has a name from mountain ranges in Nepal and Pakistan (our room was called Caucasus; others Himalaya, Karakorum, and Hindu Kush). The evening we arrived was rainy, misty and dark. We thought we had landed in a Wuthering Heights look alike. It had the same atmosphere of mystery. We want to go back.More

Show less
Room tip: All the four rooms are lovely. This Inn is in a small mountain village. It's very quiet. There is o traffic. We slept like babies. We were sorry to have to leave.
See all 106 reviews
Payments made by partners impact the order of prices displayed. Room types may vary.
Nearby Hotels 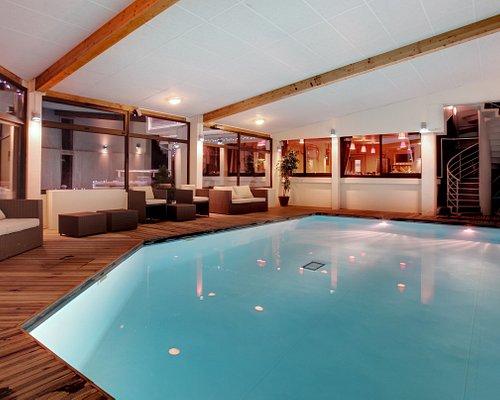 Hotel Le Panorama
US$98
Tripadvisor
View deal
Reserve now, pay at stay
Hotels.com
Expedia.com
US$98
CheapTickets
US$98
View all 13 deals from US$98
417 reviews
13.5 km from Auberge de la Providence
We compared the lowest prices from 13 websites 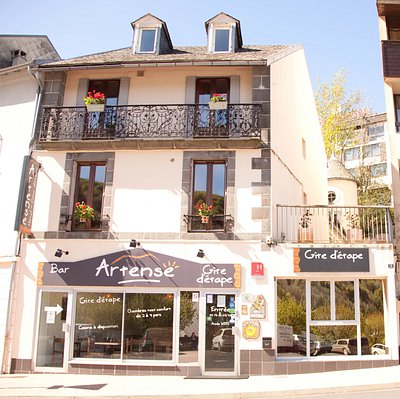 Hotels.com
View deal
Booking.com
US$72
eDreams
US$72
Expedia.com
View all 9 deals from US$72
101 reviews
13.5 km from Auberge de la Providence
We compared the lowest prices from 9 websites
Hotel Restaurant Au Val Dore
US$90

We had 4 nights at this superb little auberge and cannot fault it. Caroline and Eric are very welcoming. The room was very comfortable, very nicely decorated with a little place to sit and have a read and a chat at the end of the day. The food was unbelievably good both for value and for quality. In particular I would recommend the truffade and the stone cooked meats. The auberge is very well placed for walking and sightseeing and the location is beautiful. We could see the Puy de Sauncy from the village and could not quite believe there was snow there in late May/early June but though the weather was cooler than we had anticipated, this did not spoil our enjoyment. This was our first time in the Auvergne but hopefully not the last. back.

What a fab little place, very hospitable hosts, excellent home cooked food and totally great value for money, would definitely return for a weekend away. Very accommodating place when traveling with a baby, it truly felt like being at home but without the washing up!! If your looking for a simple place out of the city then this really is perfect.

me and my wife spent 4 nights in this extraordinary location. The area around the hotel is beautiful and very special. The service and the restaurant was very good. The owner was very kind and gave us tips for walking. Maybe we choose a unfortunate time because the temperature in the restaurant and in our room were unconfortable. All in all, we advise this hotel for people, who are looking for a silently and unique place.

This review is the subjective opinion of a TripAdvisor member and not of TripAdvisor LLC
Ray S
Vieillevie, France
199140
Reviewed 20 August 2012
Superb Auberge in a beautiful location

Lovely auberge in a beautiful area and just a few miles away from the Puy Sancy range and the ski-resorts of Super-Besse and Mont-Dore. This is superb walking country and at the end of the day you want to return to a warm, cosy and welcoming establishment. The Auberge de La Providence ticks all these boxes and many more besides. The owners are friendly and welcoming and the rooms warm and cosy. The cooking provided by Caroline is excellent and although Dutch she has embraced the Auvergnate style of cooking to a high level (I can thoroughly recommend the pork cheeks in a honey sauce). The area is well worth a visit and I would highly recommend staying at the Auberge as a base.

Room tip: We had a rear room, the Hindu Kush, which was very quiet with the exception of a vocal cockerel at sunrise. However, if you stay in the country this is to be expected.
Ask Ray S about Auberge de la Providence
Thank Ray S

This review is the subjective opinion of a TripAdvisor member and not of TripAdvisor LLC
Gelamonster
Paris, France
1
Reviewed 29 July 2012
We'll be back for sure

We thoroughly enjoyed our stay at the Auberge de la Providence from 11th to 14th April 2012. The room was clean, comfortable and quiet. After our daily explorations, Eric and Caroline welcomed us “home” to the relaxing bar and cozy dining room. We enjoyed Eric’s cocktails, one specially created by him with the local Avèze, and he even had lime for a “proper” gin and tonic! A local chef had passed his secrets on to Caroline, and we relished her delicious Auvergnat cooking. The tiny village of St. Donat is picturesque and is a great base for exploring the beautiful countryside. We enjoyed meeting the amiable locals, both at the Auberge and at the little grocery store behind the church where we purchased and learned a lot about local specialties. We will definitely return and highly recommend l’Auberge de la Providence.

This review is the subjective opinion of a TripAdvisor member and not of TripAdvisor LLC
View more reviews
PreviousNext
123…18
<script type='text/javascript' crossorigin='anonymous' async onerror='__scriptLoadError(this,true);' src='https://static.tacdn.com/assets/SMVlF-.1ad6edf5.