DECENT PLACE FOR BUSINESS OR LEISURE - Review of Ramada Hotel

US$40
View deal
Free cancellation until 10/12/21
Travelocity
Orbitz.com
Priceline
View all 13 deals
Prices are provided by our partners, and reflect nightly room rates, including all taxes and fees known to our partners. Please see our partners for more details.
Payments made by partners impact the order of prices displayed. Room types may vary.
SachinRI
Mumbai, India
5036

DECENT PLACE FOR BUSINESS OR LEISURE

Located in the city of Linyi, this hotel is well known to Indians for the presence of Indian Restaurant at its entrance. Also for locals this place is known for short business trips stays. The rooms are spacious and the service is very good. Only hitch is that they have limited English speaking staff but that should not be an issue. We can manage with sign language.... Overall a very good experience staying in such an interior of China.

Room tip: choose the deluxe rooms with high floors for better city view
See all 22 reviews
Payments made by partners impact the order of prices displayed. Room types may vary.
Nearby Hotels 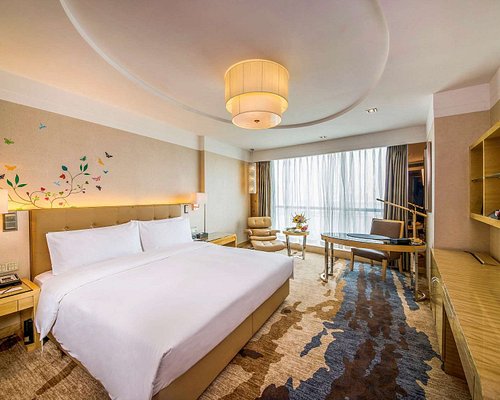 Expedia.com
View deal
Hotels.com
ZenHotels.com
US$98
Travelocity
View all 15 deals from US$98
830 reviews
5.8 km from Ramada Hotel
We compared the lowest prices from 15 websites 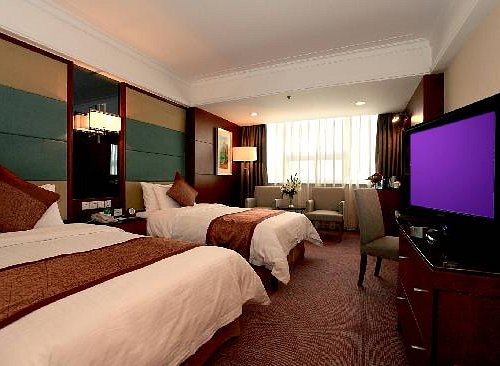 The hotel is a decent clean hotel one that you would expect in a place like Linyi. Many Indian travelers prefer this as there is an Indian restaurant attached to the hotel. Other than that it is quite average and location wise it is away from city center. If you crave Indian food in Linyi then this is the place to stay.

This review is the subjective opinion of a Tripadvisor member and not of TripAdvisor LLC.
pdawn
Muscat, Oman
3922
Reviewed 2 October 2016
Good Business Hotel

Little far from airport, It took almost 40 min from airport but hotel was good with nice chinese breakfast. Helpful staff, Easily connected, next to the bus stand. Modern and decorated hotel. Good option for Veg and Non Veg both. They have a Delhi restaurant within the hotel area.

This review is the subjective opinion of a Tripadvisor member and not of TripAdvisor LLC.
Sanjay G
India
3729
Reviewed 1 September 2016 via mobile
Good for Indian Travellers

This was my 2nd stay in the hotel, the first being in December 2015 for around 11 days. The service levels have come down slightly since my last visit. The evergreen smile which was the hallmark of each and every staff last time was missing. I guess many of them have been replaced.

I stayed in one of the biggest rooms of the hotel, which was quite good with ample sitting area (can easily sit 6 people) large bed, most of the required amenities. However, the linen is not changed everyday as I could see once.

Washroom again was clean and a bit smaller as compared to the room. However it was pretty functional. Could see some towels in a torn condition from sides which is not expected from a Ramada property.

Breakfast at Four Seasons Cafe was similar the whole day. They had a few western items also like Pizza for the foreigners.

All in all a value for money and if food is one looking for then Indians have a nice place to stay in Linyi.

This review is the subjective opinion of a Tripadvisor member and not of TripAdvisor LLC.
ShreyansShah
Sangli, India
7062
Reviewed 10 August 2016
nice one

been to Linyi in July 1st week. it was good stay. location was also good. it's centrally located, and easily connected. have good facilities. and further to add, they have Indian restaurant, the Delhi Restaurant, having Indian staff and chef. this made my stay much nice and easy as Indian food was not easy to find in China for vegetarian like me.

This review is the subjective opinion of a Tripadvisor member and not of TripAdvisor LLC.
241ss
Ahmedabad, India
1511
Reviewed 1 July 2016 via mobile
Good stay for business specially Indians

Stayed at this hotels for two nights.

It's right next to the bus stand! However it's not at all chaotic.

It's a nicely made Morden hotel. My stay was including breakfast. I am a vegetarian and thought I wouldn't get much here. But there were fruits, salads, breads and corn flakes which made up more than enough for me for breakfast. For business travellers this hotel is quite centrally located as most factories are about 40 minutes from the hotel in either direction. The hotel provides free wifi!

The bathrooms in the room don't match to the room standards. However they are okay.

Now the best this for Indians!! There is a Indian Restaurant which has opened in the hotel building goes by the name New Delhi!! Good big restaurant, nice ambiance and good food.