PUNCHED IN THE FACE BY A TODGE

During my time here I was charged 100 euro for aircon.. to have the staff nick the remote for the aircon so we couldnt have it in.. we were then accused of breaking items... including cars which went on to result in a large bill which we could not afford to pay... For items we did not break.. Furthermore I then recieved conjunctivitis from the swimming pool... Not winning... The highlight of out stay was trying to run away from the hotel owner.. known to us as TODGE... he went on to try and nick our suitcases which resulted in a large game of tug and war.... Despite all 6 of us trying to win the tug.. We failed.. This resulted in TODGE hitting two 20 year old girls in the face.. Sending us on a little fly.. We did not appreciate this.. so tried to escape again, this resulted in us being attacked and grabbed again.... The final bit of icing on the cake was TODGE biting his own arm and saying he was going to show the police that we bite him.. even though we would never bite the SMELLY TODGE... NEVER EVER EVER EVER EVERRRR stay here... and stay defo away from the TODGE!!More

Show less
See all 54 reviews
Payments made by partners impact the order of prices displayed. Room types may vary.
Nearby Hotels 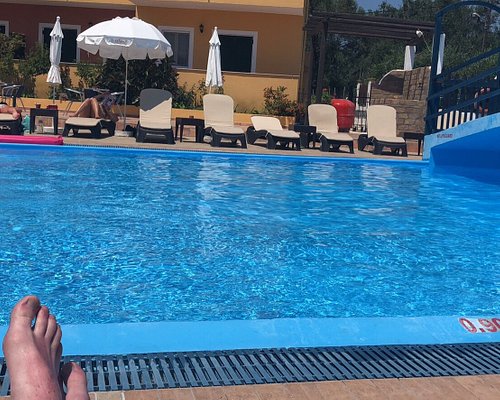 Nikos Villas Corfu
US$1,149
Tripadvisor
View Deal
Reserve now, pay at stay
Hotels.com
Expedia.com
US$1,149
CheapTickets
US$1,149
View all 9 deals from US$1,149
33 reviews
2.4 km from Alexandra Beach Resort
We compared the lowest prices from 9 websites 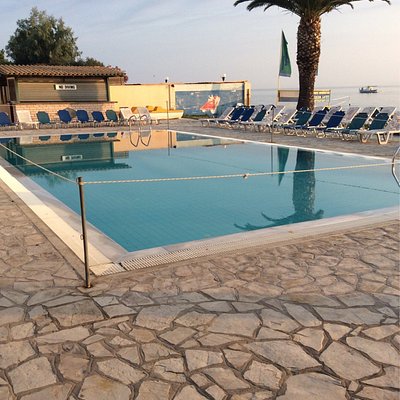 Lemon Grove Hotel
US$49
Tripadvisor
View Deal
Pay up to 12X
eDreams
Hotels.com
Snaptravel
View all 10 deals from US$49
150 reviews
0.2 km from Alexandra Beach Resort
We compared the lowest prices from 10 websites

myself and a group of friends stayed in this hotel for a week, when we first arrived we were taken to our rooms. we looked round the rooms and there was nothing wrong with the rooms that we could see, however 3 days into our staying there was a huge leak in our ceiling which we quickly informed the staff of. It took three days before they got someone to come fix, meanwhile they gave us 1 towel to stop the water spreading; when we looked closely at the ceiling we saw that there was a lot of mould across the ceiling which indicated that it had been leaking for a long period of time.
Then on our last day we left our rooms at 12 as requested but as our flight wasn't until later that evening we stayed in the lobby. During this time the owner had checked the rooms and approached us saying that the fridge in our room was broken and that we would have to pay for a new one. it turned out to be a problem with the motor which was a natural fault not damaged due to our use of the fridge, however the owner persisted that we paid 160e or he would call the police. we then called our rep who sorted out the misunderstanding and left saying that we did not have to pay as it was our fault. however after he had left the owner threatened us again with the police if we did not pay. After the owner received a phone call from the Twenty's office the situation was sorted but we did not get an apology for the hassle they had caused us on our last few hours within the hotel

This review is the subjective opinion of a TripAdvisor member and not of TripAdvisor LLC
gjribena
teesside
55
Reviewed 3 July 2012
Great quality!

We stayed here last year for one week and really enjoyed it. We arrived late at night and the staff were still up and offered us free drinks. Staff made us feel very welcome and explained what the hotel had to offer as well as some basic rules. You do have to pay an additional charge for the air con which is necessary as the rooms can get quite warm but the price was reasonable really. The hotel was a ten-minute walk from the strip which was perfect for us as we wanted to make the most of the nightlife in Kavos without having to be part of it 24/7. The Greek night is highly recommended, we found it to be a lot of fun and a great way of meeting the other guests at the hotel. The pool was always clean and always a sunbed available. The food available at the pool bar was reasonably priced and sufficient choice but there are also plenty of restaurants to choose from on the main strip.
The only thing that was an issue for us was the amount of mosi bites that we got so definitely take something with you to try prevent/treat these. You can buy treatments from the couple of little stores on the strip but they're not the best quality and hence not very effective. Other than this we had a great holiday and would definitely stay in this hotel again if going back to Kavos.

This review is the subjective opinion of a TripAdvisor member and not of TripAdvisor LLC
matandsu
Hull, UK
12151
Reviewed 24 January 2012
Two weeks of kavos

We stayed as a family with our 12yr old daughter in the end of July / beginning of August, so peak weeks. One of the opening comments from the friendly staff was 'we don't normally get families at this time of year - do you know anything about Kavos??'
We did, fortunatley, know that its a louder / night out kind of resort, but as we are not past it yet this was not a problem! As it turns out, the hotel is just far enough away from the resort / strip that you can't hear it at night, but, it is close enough to be in the bars within a 10 minute walk. Not the prettiest of resorts during the day though!
The apartments themselves are fine, though the cooking facilities in ours were limited to two hotplates. The food at the bar though is reasonably priced, and decent quality - and the bar / kitchen was open 24/7 - in fact you hand your room keys in as you leave / collect them when you return.
It's a fairly compact set up, with the apartments over three floors in one building, which also houses the bar/reception/kitchen/dining area. But this means the pool is close too, and there is a quiet beach at the end of the pool as well! There was a lot of grassy weed on the waters edge, but, do make sure you make the effort to wade through this because a few metres in, the sea is fantastic, and its possible to wade out a long way.There is an occasional dodgy smell from a stream which runs down the side of the property, but it is only occasional. Otherwise the pool area is clean.
We found the staff all really friendly, and would also reccomend the Greek night for both the food and the atmosphere, if only before going out for the clubs. Try the home made wine - we tried it repeatedly, by the jug full.
Our room was well maintained, and regularly cleaned. We had no problem with claims of damages or similar, although there was a list of items with breakage costs against them on the kitchen door as a kind of warning. While we were there we did see one disagreement between staff and customers, but we did not hear all the details - it's possible dealing with a lot of 20-somethings 24 hours a day all through the summer may test anyones paitence?

This review is the subjective opinion of a TripAdvisor member and not of TripAdvisor LLC
newcastle1960
Newcastle upon Tyne, United Kingdom
14666
Reviewed 23 August 2011
true comments

we have just returned from the alexandra apartments in kavos. when we were looking for a holiday we had a limited budget and we were also limited on when we could go, we have been to greece and the islands a lot of times so we have a good idea of what to expect in terms of standard of accomodation. we paid what we thought was a good price for one week in the middle of august, we checked out the apartments on the net and were well aware of the reputation kavos has, we are both around the 50yrs mark so our clubing days are well over ( my wife will disagree of course ) but we thought is was worth the risk - and boy were we pleased with the apartments it is situated the right distance out but close enough to walk into the main strip of kavos, there is plenty of good places to eat try pefkos restaurant it is typical greek restaurant on th strip, we went there a couple of times and the food was excellent try the kleftiko it was fantastic.the beach was not great but you can still have a pleasant swim. Alex and Tony were great infact everyone was very helpful, the pool area was very good and you can access the beach easy, we had no disruption from any of the younger guests they were all good fun. prepare yourself for the mosi attacks, I have no doubt anyone should have an enjoyable stay here.

Room tip: we were very kucky we had a 2 bedroom apartment, ask for an apartment on the end also the top floor so you limit the noise above and beside
Ask newcastle1960 about Alexandra Beach Resort
4  Thank newcastle1960

This review is the subjective opinion of a TripAdvisor member and not of TripAdvisor LLC
abi187069
Manchester, United Kingdom
13
Reviewed 31 July 2011
would not stay here again!

At the beginning of our stay here we enjoyed the place, however our apartment had a horrible smell of sewers due to the bathroom not being cleaned properly since the previous guests. Our bed cover and towels were not changed once throughout our whole stay. The owner of the hotel made us, as a group of young girls seem uncomfortable. On the last day of our stay here we saw some of the staff arguing and being offensive to another group guests, and later began doing the same to us accusing us of being disrespectful which in no way we were. When check out arrived, ever group of people had been charged for damages to the room which no body could remember doing! Our group was charged for a bed sheet which had been obviously been slashed and torn with a knife which under no circumstances we had done, this cost us thirty euros to replace which we were devastated by as we had barely any money left over from our trip. We spoke to other guests, of which one couple had been charged eighty euros for a broken bed and two broken chairs which they had no recollection of ever breaking. Thomson need to stop advertising this place to customers!