Hotel Santa Viviana
Hotel Santa Viviana
Lowest prices for your stay
Lock in the lowest price from these sites
US$70
Free cancellation until 22/05/22
Reserve now, pay at stay
View deal
PricelineUS$70
Agoda.com
StayForLong
ZenHotels.com
Destinia.com
Payments made by partners impact the order of prices displayed. Room types may vary.
Prices are provided by our partners, and reflect nightly room rates, including all taxes and fees known to our partners. Please see our partners for more details.
BasilBrushed
Suesca, Colombia
9540

We picked this hotel at last minute. Its ok. Not the best and not the worst.
The check in experience was awful, like and argument. We were plonked in a family room for one night, with the worst shower I have ever known. The next night we was moved to a double room with a functioning shower which was a lot better. I rained a lot while we stayed and there is no heating or towel heater, so we could not get any clothes dry. Also we they did not change the towels so we had wet towels every day. The hotel is pretty with lots of nice flowers, but it is dated. At breakfast we were served by nice enough staff, but they did not seem to change their clothes, with food stains all down themselves, the same was true for the table cloths. There is a nice little swimming pool. Overall I would say the hotel is ok, its mid price range which is ok. The access to town is good and it's still on a quiet road. If I was on a budget i might return.More

Show less
Room tip: I preferred the room over the little bridge,
See all 83 reviews
Payments made by partners impact the order of prices displayed. Room types may vary.
Nearby Hotels 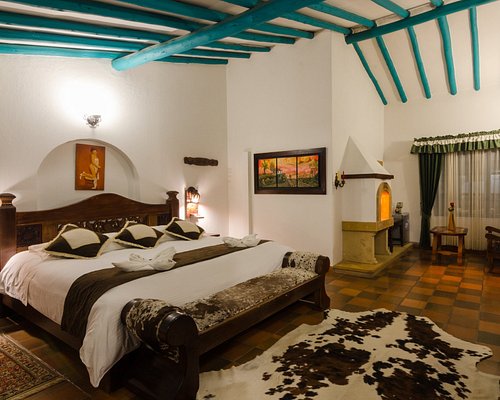 We chose this hotel for its free parking and close proximity to the centre of Villa de Leyva. Other than the friendly service that was about all that was good about this hotel.

Our room was very dated and particularly the bathroom. It was not very clean with lots of hairs in the bathroom and dust in the room. The toilet had an issue that meant it kept flushing and leaked (clean water). There was an issue with the boiler which meant we had to have cold showers. Also, the windows had gaps all around which meant a lot of insects and draft came in - and the room has no heating or air conditioning. Breakfast was ok. I wouldn't go back.

This review is the subjective opinion of a Tripadvisor member and not of TripAdvisor LLC.
CXB_Col
Bogota, Colombia
3010
Reviewed 20 January 2017
Nice quiet place

The hotel looks like if were in the country side but it´s near to the downtown, walking distance to the cathedral, plaza mayor, restaurants and shops. Very quiet and cozy.

It has a covered pool non heated, and a little creek passing through the property.
The rooms were clean with modest decoration. The breakfast was very good.

This review is the subjective opinion of a Tripadvisor member and not of TripAdvisor LLC.
Emilie H
Luxembourg City, Luxembourg
1
Reviewed 7 October 2016
Peaceful place, great location!

This peaceful hotel is conveniently located minutes walking to the main plaza. Staff is friendly and helpful. Good breakfast with local products. Lots of outdoor green areas, the buildings are of typical regional design.

This review is the subjective opinion of a Tripadvisor member and not of TripAdvisor LLC.
janitzaa2015
Noord, Aruba
4
Reviewed 8 August 2016 via mobile
Nice place!

Very clean, the staff was very nice and helpful. It's within walking distance everything, restaurants, shops, the main square, etc. breakfast and parking included. Highly recommended for a romantic weekend. Family friendly. And they are building a pool!!

This review is the subjective opinion of a Tripadvisor member and not of TripAdvisor LLC.
alexdN4227OI
London, United Kingdom
1812
Reviewed 1 February 2016
Pleasant stay in relaxing location

Villa De Leyva was a world apart from the metropolis that is Bogota. The Santa Viviana hotel, located a 10 minute walk from the towns main square filled all our needs. Comfortable, affordable, quiet. Would use again if we ever come back this way.

The lack of a restaurant wasn't really an issue as plenty of choice within a short walk.

Great view of surrounding mountain range from the hotel grounds.