US$648
US$552
View deal
SAVE US$96
Expedia.comUS$627
eDreamsUS$563
HurbUS$648
View all 15 deals
Prices are provided by our partners, and reflect nightly room rates, including all taxes and fees known to our partners. Please see our partners for more details.
Payments made by partners impact the order of prices displayed. Room types may vary.
akfrancsis
New York City, New York
41

We had a really phenomenal stay at this hotel. The unobstructed, panoramic views of the ocean (aided by the infinity pool that melded seamlessly in) were amazing, and the property in general blends luxury (curtained daybeds + delicious 4-course dinners based on local seafood + strangely good and wide wine, single malt, rum, grappa, and cognac selection for an isolated Italian promontory) with the feeling of a unique experience (converted old lighthouse that retains some of that "not modern" feel via its white-washed spiral staircases and old brick ceilings). The staff was extremely gracious and helpful, and the property is located very close to a number of really good beaches (the local walking distance beach is quite nice and you're only a 15 min drive from Tuaredda Beach which is really something). It's definitely worth going out of one's way to stay here.More

Show less
See all 147 reviews
Payments made by partners impact the order of prices displayed. Room types may vary.
Nearby Hotels 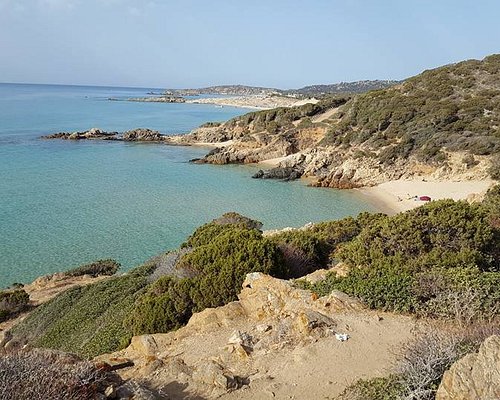 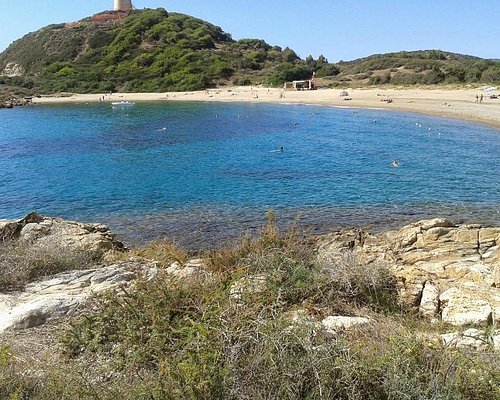 We stayed at the hotel for 2 nights and it was incredible. The views from this hotel are breathtaking and truly cannot be described. The hotel itself is very remote which is great for relaxing and unplugging but we remained on site at the hotel for the majority of our stay and took all of our meals here as there wasn't much nearby. The unique appeal of staying in a functioning light house was for us a one of a kind experience and we loved the feeling that we were staying in someone's home. It was so quiet and though there were a few other people staying, it always felt like we had the place to ourselves. The service was absolutely 5 star. Catering to our every need, always on hand for a drink a snack or a towel--it felt more like butler service than typical hotel service. The room was spacious and lovely but I found the bed to be very hard and uncomfortable. Our room was a duplex but the narrow staircase and layout made it impossible for us to bring our suitcase upstairs to the "bedroom" area which was awkward. The air-conditioning was weak and I found myself uncomfortable overnight. I was surprised at the lack of quality of the bedding and towels--for the price, I had expected luxury in all aspects. The food was excellent with a chef who is very talented and personalized service to meet your wishes and needs (each day they ask what you would like and when you would like it). There are trails off the property to discover a popular beach at the bottom of the hill and a cove but overall there is nothing but farmland at the top--this is not a place to go to explore the surrounding area. The infinity pool while small really was infinity pools were made for--you can see forever beyond the horizon. The sunsets were pure magic. During the day, we wished there were more shade options. The loungers did not have umbrellas and the covered areas were limited and being that high up, the sun was strong. The wifi does not work anywhere on property except inside the main house which was disappointing to not have service by the pool or in our room--but I suppose also a positive as it forced us away from our phones and to take in the surroundings. Overall we had a memorable and absolutely wonderful stay. This is a very expensive hotel and while we have travelled the world staying at the top hotels and destinations, this was among the most expensive and while in many ways it met the 5 star criteria,other amenities were lacking- a few small tweaks and this could be one of the most amazing hotels in the world.

The location of this hotel is magical, as was our first night. The meal, the service, everything was perfect. Well, maybe not perfect but as close as it comes. We think we were the only guest, or maybe there was another couple but we did not see them. It seemed to be the beginning of the season and there seemed to be many things not quite as they should be. For example, there was a warped board in the floor of our room over which we kept tripping. However, given the views from our ocean-view room, we considered it a minor annoyance. What was disappointing were some of the meals and some of the service. We had all our dinners at the hotel and, given how good the meal and service were our first night, we had high expectations. Sadly, those expectations were not met. For example, we were not given the choice of meals we were led to believe we would have - just what was on hand which, on the second night, was mediocre as was the service but, after we said something, both improved on the third night. For a place this high-end that markets that it has a chef who will cater to your preferences, it is unfortunate that meals and service were not consistently better and that we actually had to say something. Ah well. Presumably, both get better during the season.

Room tip: If you can get an ocean-view room, grab it. It is well worth the price.
Ask shildon about Faro Capo Spartivento
4  Thank shildon

This review is the subjective opinion of a TripAdvisor member and not of TripAdvisor LLC
Fredman14
Redding, California
4650
Reviewed 5 April 2018
Sardinia

An amazingly beautiful island where it feels like time stood still. Excellent food, spectacular views, and warm people. No noise, no stress and the most beautiful beaches of the Mediterranean. It feels natural, free and the atmosphere is just perfect.

This review is the subjective opinion of a TripAdvisor member and not of TripAdvisor LLC
stefanie4290
Bucharest, Romania
2817
Reviewed 22 August 2017 via mobile
Amazing "home-experience"

We felt just like home
Very nice and kind staff
The view, the comfort,the food and everything about this place Was Amazing
We will surely come back
This experience was much better than to go in a 5star crowded hotel

This review is the subjective opinion of a TripAdvisor member and not of TripAdvisor LLC
Zacca31
Milan, Italy
11
Reviewed 23 July 2017 via mobile
Magic Place

We spent amazing 2 days in a dream place. Hidden in the wild Sardinian landscape, a jewel with impeccable staff. Thanks to Rodolfo, Antonio, Angelo and Filippo that took care of us and made our stay unforgettable.