US$103
US$94
Free cancellation until 18/12/21
Reserve now, pay at stay
View deal
Hotels.comUS$94
TravelocityUS$94
Orbitz.comUS$94
TripadvisorUS$94
FindHotel
ZenHotels.comUS$103
View all 14 deals
Prices are provided by our partners, and reflect nightly room rates, including all taxes and fees known to our partners. Please see our partners for more details.
Payments made by partners impact the order of prices displayed. Room types may vary.
777SarahB777
Guildford, United Kingdom
737264

A suitable hotel so close to the historic centre and the bars and restaurants but so good if you are interested in being close to the sea. Wonderfully supportive staff but the general decor of the room could do with a facelift

Trip type: Travelled as a couple
See all 117 reviews
Payments made by partners impact the order of prices displayed. Room types may vary.
Nearby Hotels 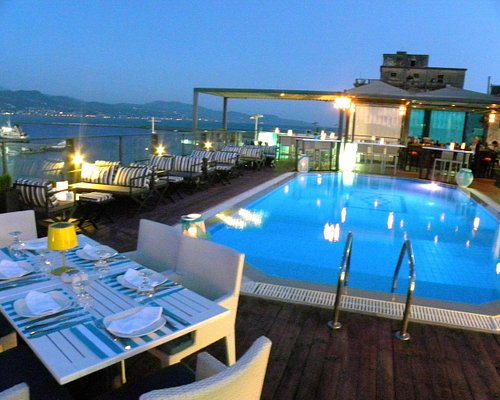 Expedia.com
View deal
Hotels.com
eDreams
US$105
Travelocity
View all 13 deals from US$105
138 reviews
1.7 km from Rex Hotel
We compared the lowest prices from 13 websites

Expedia.com
View deal
Hotels.com
ZenHotels.com
US$79
Orbitz.com
View all 16 deals from US$79
78 reviews
1.7 km from Rex Hotel
We compared the lowest prices from 16 websites
Petra Thea

We stayed here for a weekend whilst on holiday in Chrani. It`s not our first time here ( we stayed here a couple of times in 2014) but always wanted to return. A small hotel in a period building, it`s centrally located and near to the historic centre and the bus station. Extensive breakfast and very helpful staff who speak good English

This review is the subjective opinion of a Tripadvisor member and not of TripAdvisor LLC.
Barbara P
Koper, Slovenia
10773
Reviewed 15 October 2018
Needs updating

Pleasant hotel with a flare of stepping a few decades back in time. Management should tackle the water damages, get rid of shower curtains and provide outlets in the room. Situated in the uppermost floor, in my bathroom started "raining" from the ceiling during a heavy storm. The breakfast is dull, but the ground floor restaurant is very nice.

This review is the subjective opinion of a Tripadvisor member and not of TripAdvisor LLC.
Anonymous1962
New York City, New York
84
Reviewed 5 September 2018 via mobile
Decrepit

This is barely a two star hotel. Basic furniture. Dirty carpet and peeling wall paper in hall. Discolored wooden floor in room. Lumpy mattress. Unhelpful front desk. We had to go to several rooms to find even barely-working air conditioning.

This review is the subjective opinion of a Tripadvisor member and not of TripAdvisor LLC.
A_and_B_12
Athens, Greece
4975
Reviewed 15 July 2018
Disappointing - loud music played until after midnight.

We recently spent another night at Hotel Rex and were looking forward to it, as we've stayed there a number of times before and generally found it to be the best hotel in the area, with nice rooms and great staff.

Above all we expect to able to have a good night's sleep in a hotel, especially one that prides itself as being a proper hotel with a distinguished history. We did have a problem with noise on a previous visit, but that was due to other guests and the staff did a great job of sorting that out. However, now the 'management' had decided that they would lay on loud live music outside the hotel restaurant (i.e. directly underneath a good proportion of the hotel's rooms) until 12.30 at night (on a Friday, I don't know about other nights). We complained about this and, as ever, the front of house staff did their best to try and solve it. But the attitude of the restaurant staff was essentially 'We have a license to make noise until 12.30 and that is what we are going to do'! Fine you have a license, does that make it a good idea to annoy your customers? Did any other customers complain? I don't know and I don't care - if you are annoying one set of customers you need to sort it out. Perhaps someone has run the math and decided that the extra restaurant receipts are worth annoying a few guests? Possibly, though I doubt that calculation has been undertaken - or that the need for it even entered anyone's heads there.

How loud was the music? Loud enough to stop us from sleeping four floors up, and my partner has a very considerable tolerance for noise - she could sleep through an earthquake (and given she grew up in Greece probably has!).

Super disappointed with this; this is where we like to stay in Mani at the end of our holidays and we've brought the hotel other customers too. The 'management', if they are to deserve that title, need to get a grip. Don't come on here and give us a load of spiel in response, do your job(s) properly and sort this out.

Room tip: If they insist on playing loud music outside late at night, try and get a room at the front of the hotel to the left as you are facing it.
Ask A_and_B_12 about Rex Hotel
2  Thank A_and_B_12

This review is the subjective opinion of a Tripadvisor member and not of TripAdvisor LLC.
Th3dark1nsid3m3
Athens, Greece
3728
Reviewed 11 February 2018 via mobile
Definitely not a 4 star hotel

The outside is nice. Location is also good. Very old rooms. At least the 4 rooms that we got on the 4th floor. Breakfast was just basic. There are no cleaning (maid) services around the clock.
Friendly staff. Great Greek coffee.

This review is the subjective opinion of a Tripadvisor member and not of TripAdvisor LLC.
View more reviews
PreviousNext
123…
<script type='text/javascript' crossorigin='anonymous' async onerror='__scr