US$119
View deal
Free cancellation until 02/06/22
Booking.com
eDreams
TravelocityUS$119
View all 13 deals
Payments made by partners impact the order of prices displayed. Room types may vary.
Prices are provided by our partners, and reflect nightly room rates, including all taxes and fees known to our partners. Please see our partners for more details.
SemperteFallant
Solihull, United Kingdom
118100

Road at the front, quayside at the back and a secure car-park attached, right in the middle of the port, a pleasant half hour walk to the huge Plage des Chalets and less than 15 mins to the Village. The room was on the small side but spotless and very attractively decorated in red and white, with a small balcony and a superb view over the quay / marina. The only niggle was the 16:30 check-in time, which seemed inordinately late, and to visit the beach we had to unpack and change in the toilets. The quayside bar was good for a drink and breakfast, but deserted at dinner time - maybe because they were playing music far too loud?More

Report response as inappropriateThank you. We appreciate your input.
This response is the subjective opinion of the management representative and not of TripAdvisor LLC
See all 260 reviews
Payments made by partners impact the order of prices displayed. Room types may vary.
Nearby Hotels 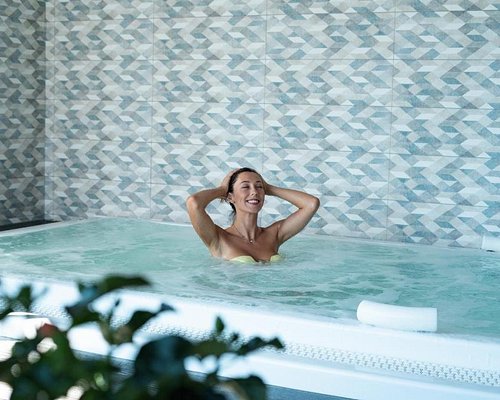 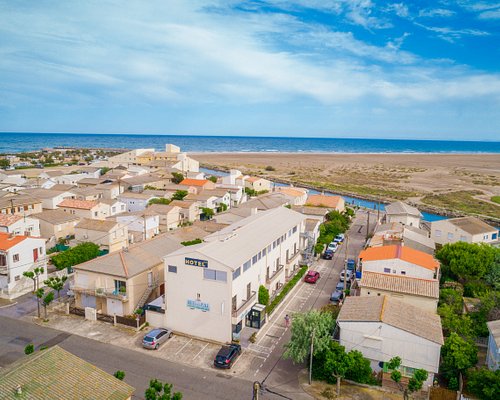 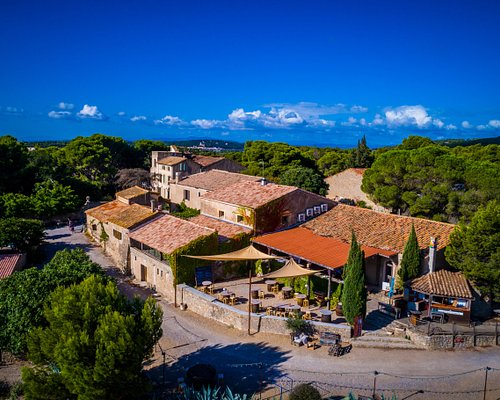 Hotel located on the waterside in the port.
Friendly check-in
Smallish, clean modern room with little storage but a fantastic balcony overlooking the port.
Bar closed rather early in the evening when I wanted to have a G&T on the balcony :-(

Report response as inappropriateThank you. We appreciate your input.
This response is the subjective opinion of the management representative and not of TripAdvisor LLC
margarethC3063BR
Narbonne, France
5762
Reviewed 3 July 2019
Great find and Twin beds!

Booked this hotel whilst sitting on the beach (we live only 15km away!) Reception staff friendly and helpful, our room was perfect for our needs, beds comfortable, good quality bed linens, newly refurbished bathroom sparkling clean, a decent hairdryer (a surprise as it was attached to the wall). The small fridge was a bonus, airconditioning was a treat in the current heatwave. There was a terrace, but screened with retractable windows, ideal if you wanted breakfast as it had a table and 2 chairs on it. I suspect the screening was as it wasn't a port facing room, hence reducing any passing traffic noise, which certainly didn't disturb us. Breakfast buffet had a reasonable selection, including a GF Cereal option (though no GF bread or Madeline options) Fruit salad, whole fruit, cold meats,hard boiled eggs, cheese (sadly plastic wrapped) yoghurts, bread and pastries, It was nice to have breakfast outside, overlooking the port. The hotel also has a restaurant, cafe, bar etc. It was good to park the car in their secure car park and they were happy for us to leave it there after check out time as we took a wander.

Report response as inappropriateThank you. We appreciate your input.
This response is the subjective opinion of the management representative and not of TripAdvisor LLC
Rob M
Altrincham, United Kingdom
314129
Reviewed 11 March 2019
Some good bits and some not so good

Firstly, it has all the appearance of a smart hotel, well positioned by the Gruissan marina. The staff are friendly – face to face, anyway, more below. The bed is comfortable and the facilities in the bathroom are modern – although the modern sink means there isn't much room to put toiletries etc. From reading other reviews, it seems the room has been modernised recently. The wifi signal is also exceptional.

On a less positive front, there are some areas that let the hotel down. Before booking I used their website to try to engage in a discussion about my needs. There was no prompt reply – some days later a warning came up on my pc to say that a contact had been made but it disappeared before I had chance to see what it was and I could find no trace of it anywhere (email, message, whatsapp, etc). I sent a second message but got no further response. I delayed booking until nearer my expected arrival because of the cancellation policy seemed punitive and there was plenty of availability. The website exhorts you to book direct for a better price (save 5euro pn) than through 3rd party, but I have an account with the 3rd party which represents 10% saving. (We were reminded of the hotel's direct-booking “discount” when we checked out, for if we ever returned, plus the welcome drink and stuff in the room that would also be a bonus.

I am a regular room-booker and I'm sure I chose a room with a balcony but, on arrival, we had a “panorama view”. As it was extremely windy, and the room rate was the same, I didn't make an issue of it. (The confirmation email didn't mention a balcony, which I didn't notice, so it could be my mistake.) I will mention that the room has a “balcony area”, it is just solid sided and completely glazed in the upper part – the view is good but you have to be standing to enjoy it – the table and chairs provided placed you too low down to see anything but sky and roofs.

One benefit of the “balcony area” was that at least there was somewhere to open a suitcase – there was not enough space in the actual bedroom area, although there was a suitcase stand. There was nowhere to put anything that you unpack, except for a narrow upright section with a rail and four hangers (supposed to be 5, see below!). The floor in the cupboard was taken up be a safe and there was also the downpipe from the upstairs bathroom running through it.

There were two things about the service that I have never come across before. The handbook was very explicit about the (punitive) charge that would be made if any of the room “equipment” was missing at the end of our stay. It went on to itemise all the stuff in the room that was moveable – e.g. 4 pillows, a runner, 5 towels, 5 clothes hangers, etc. You were told to warn reception if anything was missing on arrival. As we only had 4 hangers I passed on that information, and they seemed a bit puzzled why I bothered, and asked if I needed a 5th – I didn't, I just didn't want to have a chunk of money taken out of my credit card! I'm sure being a hotelier is fraught with people stealing stuff, but it's not good customer relations to assume you're going to. (There was a fridge that didn't get on the list but I doubt anyone would want to steal it.)

Another first for me relates to room servicing. They say that you don't get your room serviced unless you stay for two or more nights – which is also a first, but OK with me – we were to stay three nights. What was odd was being asked after two nights whether, as we were due to leave the following day, we would still like our room cleaned. We told them not to bother. It just seemed like penny-pinching – maybe business is slow?

A quick word about breakfast: we only had breakfast on the first morning. In the first place, I thought it was expensive for what was on offer, but we might still have had it on the other days. What stopped us going back was that a woman took her dog into breakfast and was feeding it buffet items by hand. This is not the hotel's fault unless, like me, you think the hotel shouldn't allow animals in the food area.

To sum up, there was quite a lot to like about the hotel, but also quite a bit that meant we didn't feel entirely comfortable.

Report response as inappropriateThank you. We appreciate your input.
This response is the subjective opinion of the management representative and not of TripAdvisor LLC
Chutey
Fairford, United Kingdom
162135
Reviewed 25 October 2018
Simple little hotel but fantastic location overlooking marina

We spent a couple of nights here in September and loved this little hotel. Although the rooms were quite small and simple, everything worked absolutely fine.
The staff were very friendly and most helpful; buffet breakfast was excellent, with plenty of choices; and there was onsite (paid) parking.
But most importantly the location is fantastic, overlooking the marina - what better way to start the day with a coffee, or even finish with a glass of something refreshing?
Plenty of restaurants overlooking the marina, within a short walk of the hotel.
And it's only a 10 minute walk into the old part of town, with its fascinating "castle" and little streets.
The beach is a 5 minute drive and there are more cafes and restaurants there.
What's not to like?!

Report response as inappropriateThank you. We appreciate your input.
This response is the subjective opinion of the management representative and not of TripAdvisor LLC
Fishtom
Les Carroz-d'Araches, France
21
Reviewed 10 September 2018
Comfortable, good value for money and close to great beach at Gruissan.

Easy to find by the lakes and a short drive to the plage that was excellent.Bed comfortable; view of the quay was excellent; room clean; hanging space a bit limited; balcony excellent and bathroom small but well appointed.

Room tip: Keep the balcony windows open for extra ventilation.
Review collected in partnership with this hotel
This business uses tools provided by Tripadvisor (or one of its official Review Collection Partners) to encourage and collect guest reviews, including this one.
Ask Fishtom about Hotel Port Beach
1  Thank Fishtom