Very good, but (obviously) far from the... - Review of Kuressaare Airport Guesthouse

US$42
Free cancellation until 27/05/22
Reserve now, pay at stay
View deal
Booking.comUS$42
Agoda.comUS$42
Payments made by partners impact the order of prices displayed. Room types may vary.
Prices are provided by our partners, and reflect nightly room rates, including all taxes and fees known to our partners. Please see our partners for more details.
Kristoffer_909090
Oslo, Norway
2325

Very good, but (obviously) far from the city center

The guesthouse is situated on the second floor of the airport terminal building. My room consisted of two beds, a desk and a TV. Toilets and showers are shared. Keep in mind that one row of rooms face the road and the sun all day, which in the summer heats up the room very much (this was the room I had). The other row faces the actual airport, which means (I assume) that you can watch the airplanes coming and going. Not that there were a whole lot of planes, in fact there was very little noise from both the road and the airport. The staff was very nice, and rooms and bathrooms were clean.

The only negative aspect here is the location. It's quite a walk to the city centre, about 40 minutes, and even further to the bus terminal. There's supposed to be a bus going out there, but I didn't see it once during my stay. It won't let this affect the rating though, as it's quite obvious that an airport guesthouse isn't situated in the middle of town. Besides, walking isn't a problem in itself, there's a combined sidewalk/bicycle path all the way between the airport and the city, and during sunrise and sunset the scenery is quite beautiful (at least in summer).More

Show less
Payments made by partners impact the order of prices displayed. Room types may vary.
Nearby Hotels Expedia.com
View deal
Pay up to 12X
Booking.com
US$80
Priceline
US$80
Hotels.com
US$72
View all 16 deals from US$72
362 reviews
2.7 km from Kuressaare Airport Guesthouse
We compared the lowest prices from 16 websites 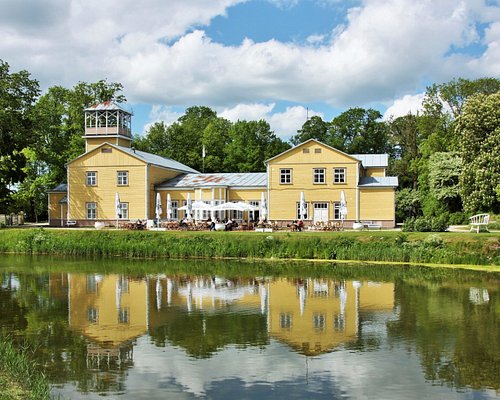 Hotels.com
View deal
Expedia.com
US$65
Booking.com
US$56
Travelocity
US$65
View all 12 deals from US$56
54 reviews
2.4 km from Kuressaare Airport Guesthouse
We compared the lowest prices from 12 websites
Breakfast included
Asa Spa Hotel