Orbitz.com
CheapTickets
Official Site
View all 11 deals
Prices are provided by our partners, and reflect nightly room rates, including all taxes and fees known to our partners. Please see our partners for more details.
Payments made by partners impact the order of prices displayed. Room types may vary.
Sportsboat2014
Dublin, Ireland
68

We enjoyed our 6 nights at this Hotel a lot. If anything let it down it was the very dour poolside bar waitresses, and the frantic breakfast waitresses who kept removing our plates and cups while we were still using them. I can only put it down to bad or no training for the temporary staff. But still, it makes a difference.... All the other staff were excellent, particularly the reception staff. The food was very good, and the room was good, except the air conditioning wouldn't come on on 3 consecutive evenings. Eventually I discovered the secret (by watching the maintenance guy) was to take the batteries out of the remote, put them back in, then reset the remote with the point of a pen, and then it worked! But they never fixed it, which bothered me, as I know the next people will be annoyed by the same thing.
Overall it was good, though the weather was unpredictable and very wet at times, but we can't blame anyone for that. I would certainly use Delphina hotels again, but maybe not Sardinia.....More

Show less
Room tip: Make sure your air conditioning works, and if it doesn't, insist that it is fixed, rather than a guy comes and manages to get it on and tells you not to change anything in case it stops again. Get the reception staff on the case, they are good.
See all 842 reviews
Payments made by partners impact the order of prices displayed. Room types may vary.
Nearby Hotels 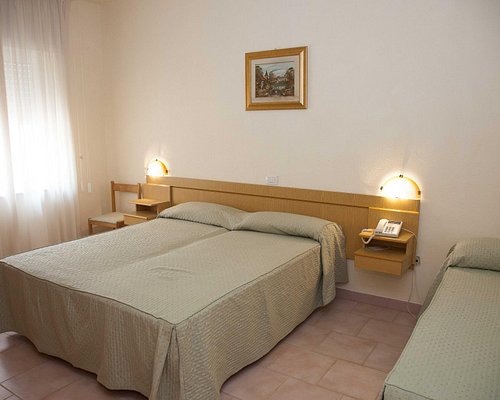 We wished we'd read more reviews before we booked this. Although overall the hotel was clean and tidy there were areas that were starting to look a little tired (the bathroom). We booked half board and it would be fair to say that our standard double was very basic/rustic. In terms of food, the breakfast was always of a good standard however the main course for the evening meal was great if all you wanted was slightly warm food served on cold plates and the 'hot' vegetables were stone cold...even the dishes that they were served in. The salads and buffet starters were always nice and fresh with plenty of Parma ham etc.
The pool area was nice and clean however there were very few umbrellas to the amount of sun-beds which were usually taken by 7am latest by the usual culprits!
The surrounding area was extremely quiet and remote; the inhabitants of Isola Rossa amount to 100 according to our rep so it's not what you would call buzzing...it's also a relatively new town so if you are expecting oldy-woldy then you will be disappointed.
The beaches are good and very quiet in the week we went. We didn't opt for umbrella hire as we were told they were quiet expensive. We noticed that in the town you can buy beach umbrellas for almost the same price as a days hire of the slightly larger ones on the beach.
We booked a boat trip through our Thomson rep but after the experience we felt like we'd been robbed and it wasn't worth the €40 each. We later learned that it was possible to hire boats from the harbour and also there's a water park nearby also - none of this was mentioned by our rep.
If all you want is a totally quiet, remote break just to lie around and sunbathe then this is for you but if you fancy some sight seeing and culture, well perhaps not...

This review is the subjective opinion of a Tripadvisor member and not of TripAdvisor LLC.
jonathanhf
UK
10074
Reviewed 9 June 2014
Location & service :) Food :( Bar prices :(

Excellent location with salt pool views over the sea. Friendly & helpful staff. Rooms are reasonable, although some only have a glazed door and no other windows. Buffet dinner main course is reheated over and over again, if it is pasta. Ingredients quality is hit and miss. On the whole, the food is not really 'starred' at all, although I realise that hotel food so often isn't the best. Bar prices are 3 times more than in the village (e.g. 12 Euros for 2 small glasses of wine compared to 5 Euros for a beer and a limoncella in the village). We got bottles of great Sardinian wine from the supermarkets for c. 5.7 Euros. On the whole the hotel is struggling to achieve the 4 stars that it claims.

This review is the subjective opinion of a Tripadvisor member and not of TripAdvisor LLC.
Frogaroundtheworld
London, United Kingdom
3145
Reviewed 9 June 2014
Lives up to it's 'relaxing' name

Stayed here the week commencing 31st May which happened to be their opening week of the season which aided the relaxing environment even more. From the moment we arrived to the moment we left the staff were superb with each knowing their roles and being helpful at all times. The hotel itself was charming and able to mix with a range of guests in the communal areas but with enough space to have your own time with some peace and quiet. The food was generally of a very good standard. Breakfast provided a range of cereals, cold meats, yoghurts, fruits, pastries and cooked offerings whilst dinner differed each evening with a staple of salads, seafood and meats coupled with fresh cooked pasta, fish and meat dishes finished with a fantastic range of desserts certain to make those with a sweet tooth drool! The drinks however were a bit over priced however the spirit measures are generous for the price you pay especially compared to back home. Again the staff in the restaurant and bar are attentive and helpful at all times. The hotel is also only situated a 5 minute walk from the quiet village of Isola Rosso which is beautiful with about 10 minutes to it's beach whilst in the other direction it is a 5 minute walk to the loungers overlooking the ocean from wooden platforms or 10-12 minutes to another beach.

Bad points? A couple. The spa costs €25 just to use the basic facilities of sauna, steam room, Jacuzzi and 'gym' (which is the worst gym I have ever used at a hotel before). The Wi-Fi is also only free for the first hour if you want to use it longer than it comes in at €3 per hour. We also found our bedroom quite dark as it received very little sunlight on our side of the building but when you are here you will find the time in your bedroom at a minimum. Hopefully anyway!

Overall a very enjoyable stay and a hotel I would recommend to those seeking sun in a tranquil environment.

This review is the subjective opinion of a Tripadvisor member and not of TripAdvisor LLC.
heidilewis2016
Krefeld, Germany
1825
Reviewed 29 October 2013
the food!!!!

The hotel is in a wonderful spot and our Superior room with sea view was beautiful. We stayed in this hotel some years ago and decided to return.
But the food was awful. No servic, only buffet. Main dishes kept luke warm, the salad bar every evening the same and expecially the pasta kept warm (or cold)
We went at the end of the season and slowly but surely services shrank, first the pool barclosed for lunch ( with a little notice saying: pool var closed for your convenience!) then the they took away the matresses on the bathing platforms.
We won't go again because of the food. We expect to have proper, fresh Italian food served at the table

This review is the subjective opinion of a Tripadvisor member and not of TripAdvisor LLC.
281059
Lacey Green, United Kingdom
1817
Reviewed 11 October 2013
Ideal relaxation

This is a superb hotel, ideally situated for the lovely village of Isola Rosso.
If you are looking for a luxurious hotel and a peaceful setting to relax in, look no further. Overlooking the Med and close to a lovely village which offers good food and drink, this is the ideal holiday to get away from the 'rat race'.
In addition to the superb location there are lovely beaches and good diving facilities close by.

This review is the subjective opinion of a Tripadvisor member and not of TripAdvisor LLC.
View more reviews
PreviousNext
1…303132…