US$188
US$107
View Deal
SAVE US$81
HotelIndigo.comUS$140
travelup.comUS$188
Hotels.comUS$140
View all 17 deals
Prices are provided by our partners, and reflect nightly room rates, including all taxes and fees known to our partners. Please see our partners for more details.
Payments made by partners impact the order of prices displayed. Room types may vary.
Sammjimm95
22

Stayed at this hotel last Monday, not only when I called to book was the lady so KIND AND SWEET but when we got there SPENCER helped us and was extremely courteous and made my husband and I feel so welcomed! The room was very clean and we asked for a city view, it was perfect! Nice showers and comfy bed! They even offered us a doggy bowl! Love love this hotel will def be backMore

Thank you for taking the time to review your stay with us. I was elated to read of the exceptional service Spencer provided to you during your stay with us! I will be sure to share your comments with him. Thank you again for staying with us. We look forward to hosting you again soon!

Report response as inappropriateThank you. We appreciate your input.
This response is the subjective opinion of the management representative and not of TripAdvisor LLC
See all 2,175 reviews
Payments made by partners impact the order of prices displayed. Room types may vary.
Nearby Hotels 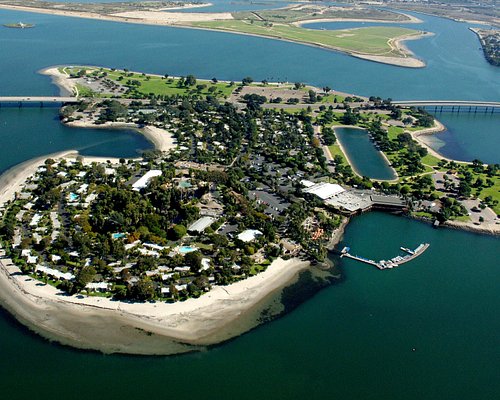 ParadisePoint.com
View Deal
Booking.com
US$257
Snaptravel
US$193
Priceline
US$257
View all 16 deals from US$193
1,991 reviews
10.6 km from Hotel Indigo San Diego Gaslamp Quarter
We compared the lowest prices from 16 websites Our experience during the stay at the Hotel was pleasant, especially due to the attention of Segio, who gave us an excellent personalized service, courteous, great disposition and kindness. We can say "never better served".

Thank you so much for choosing to stay with us, and for your awesome feedback regarding Sergio! We will make sure to share your feedback with him. We hope to have another opportunity to host you again in the near future. If I can be of any assistance, please feel free to contact me directly at erica.eisenhauer@ihg.com

Report response as inappropriateThank you. We appreciate your input.
This response is the subjective opinion of the management representative and not of TripAdvisor LLC
Rob_Y_SevenThree
11
Reviewed 17 December 2020
Unbelievable staff!

Can’t say enough about my experience at this place! I was immediately greeted by Erica, who was not only fast, courteous and friendly, but she pointed me in the right direction so I had a great night also. The room was amazing. I can’t wait to come back when everything is back to normal! This is a must stay if you are in the area!

We can not thank you enough for sharing such a wonderful review regarding your recent stay with us. I was elated to read that you enjoyed the exceptional service that Erica provided to you! I will be sure to share your comments with her. Thank you again for staying with us. Please come back and visit us soon.

Report response as inappropriateThank you. We appreciate your input.
This response is the subjective opinion of the management representative and not of TripAdvisor LLC
kanikam1214
23
Reviewed 17 December 2020
Highly Disappointed - Dirty room in the midst of COVID

My husband planned a surprise birthday trip and booked this hotel 12/11-12/15. When we pulled up I was skeptical and I was right to be. For the life of me, I can't understand how this hotel has such a high rating. I'm more of a luxury hotel person and this is definitely not that. My husband worked so hard to surprise me, I didn't have the heart to tell him that I hated the hotel room so when he asked if I liked it, I just smiled. The room is large but has bare bones. I mean no romance or nice decor, nothing! Just basic like a dorm room. If you just want a room to sleep in and aren't selective this hotel will work for you. The first thing that I noticed were the worn baseboards and the dust that was sitting on and literally hanging from the bottom of the entertainment center. I said to myself thank God I packed Lysol and Clorox wipes. Next, I pulled back the comforter and checked the sheets. They had a very tiny black mark on them; nothing major so I was relieved there at least. No bed bugs but I did itch all night one night. I started spraying EVERYTHING. Next, I went into the bathroom, the dust on the light fixtures, the mold in the shower and around the outside of the walk in shower made me cringe. Thanks goodness I packed shower shoes! I thought, I can't believe that I have to spend 4 nights in this room and on my birthday at that. I wanted to march downstairs and cancel our reservations and rebook another hotel, that's how bad it was but again I didn't want to hurt my husband's feelings. After reading the reviews, I said well he did his research and I see why he thought it would be nice. The website is misleading, the rooms don't look nearly as nice and new as they appear in the photos. I assumed from the looks of the room that this was a 3-star hotel. I was SHOCKED to realize that it is rated as a 4-star hotel. Due to COVID, the city was on shut down effective 12/5 which meant we couldn't take advantage of any of the amenities on top of being dissatisfied with the room. And this also meant that we had to spend even more time in the room since the city was shut down. YUCK! Thank God we had an early flight Tuesday morning, I ran out of the hotel the morning we checked out. I couldn't wait to leave. We stayed in room 706 which offered a view of Petco Park which my husband enjoyed. That makes this hotel a prime location for Baseball lovers and the Gaslamp district had it been open would have been a great area. Having said all that, I will not be returning!

Thank you for your review. First and foremost, I would like to extend my sincerest apologies for the numerous issues you experienced during your time with us. I would love to have the opportunity to discuss your stay with you. Please do not hesitate to contact me at your convenience. I look forward to corresponding with you.

Report response as inappropriateThank you. We appreciate your input.
This response is the subjective opinion of the management representative and not of TripAdvisor LLC
Jim M
Scottsdale, Arizona
4036
Reviewed 30 November 2020
Considering COVID, not bad.

We booked this Hotel because of reviews we had read that said it was dog-friendly. As we pulled up to check in, we saw several other couples checking in with dogs in tow, which we were glad to see. In this review, there are going to be a few things that I gripe about, but all my complaints are outweighed by the ease having our pup along for a no-hassle stay. This place gets five stars for that and should we return to San Diego, we will stay here again.

We stayed three nights on the weekend of November 20th in Room #919. As you pull up, there is a temporary stopping area in front of the Hotel on 9th Ave to unload. There was no bellman and I had to find a bellcart in the lobby myself, that's fine. I had read in a previous review about self-parking in the area (Park It on Market over on 7th Ave - about two blocks away) and decided to do the same as I didn't feel like paying $50 a day for parking at the Hotel (public parking was around $20-25/day, more on weekends).

Check in was uneventful as COVID has left things very impersonal but pleasant enough. Trip up to #919 in the two elevators showed that there was key-card security on the lifts (was good to see as downtown San Diego is filled with homeless).

#919 was the first one from the elevator, and one of the nearest to the 9th floor outside patio that they have set up for the evening and breakfast. There was some ambient noise as people passed through but not enough to either keep us up at night or warrant comment. The view was of nothing but we had one of the lowest tiered rooms. We were told on check-in that we would not be receiving HSKPing service for our stay which sucks for three nights but the room was clean on our arrival and we had no concerns of of it not being ready for us.

Did I say the wifi connection in our room was terrible, yet? It was and even after my wife haranguing their poor IT guy and trying another internal network, we did not have a lot of luck in staying connected to wifi during the stay.

Bathroom was clean and anything additional that we needed was delivered quickly by HSKP.

The Hotel is in a great location and, during the day, you can wander down a block and have a nice little park at Petco field for the dogs to do their business on the grass (warning though, the gates close as dusk and there is nothing in the area as far as parks go so get ready to pick poop up off the sidewalk).

To summarize, we enjoyed our stay at the Hotel Indigo. There were some drawbacks that we expected for traveling during COVID and the Hotel was upfront about them. Hotel is very dog friendly and that is all that mattered to us. Should we be back in San Diego, we will be checking in here again, no question.

Thank you for taking the time to leave such a detailed review regarding your recent stay with us. I was elated to read that you enjoyed several aspects of your stay. We greatly appreciate your feedback, and look forward to hosting you again in the near future.

Report response as inappropriateThank you. We appreciate your input.
This response is the subjective opinion of the management representative and not of TripAdvisor LLC
Steph6057
11
Reviewed 27 November 2020
Amazing Service

A friend and I stayed at the Hotel Indigo the beginning of November 2020. Of course being in 2020 there were different rules and restrictions - especially surrounding dine in restrictions/times. The hotel staff, particularly Spencer, went above and beyond to give that service that we were missing from a hotel. The service we received more than made up for the change in service hours of their restaurants and other temporary changes. The property itself was fantastic and in a great area. Overall, would absolutely recommend.

Thank you for your review. I was elated to read that you enjoyed your time here! We appreciate your feedback, and hope to host you again soon.

Report response as inappropriateThank you. We appreciate your input.
This response is the subjective opinion of the management representative and not of TripAdvisor LLC
View more reviews
PreviousNext
1234…363