US$136
View Deal
Agoda.com
ZenHotels.com
StayForLong
Prices are provided by our partners, and reflect nightly room rates, including all taxes and fees known to our partners. Please see our partners for more details.
Payments made by partners impact the order of prices displayed. Room types may vary.
Ilya A
11

I booked that hotel from booking.com; however, the website does not provide correct information. On the website, they show bathroom and shower are together. In fact, there are not any rooms this shower. Moreover, the hotel is located in a poor area. From the window, you can see many homeless people are sleeping on the street. Also, a carpet smells like someone made a pee. Please save your money and find a better place.

Room tip: there is no good rooms or view from the windows.
See all 19 reviews
Payments made by partners impact the order of prices displayed. Room types may vary.
Nearby Hotels 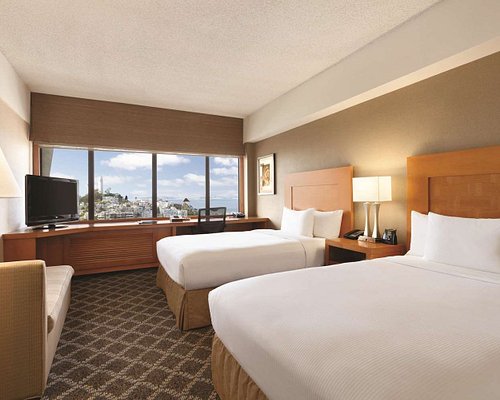 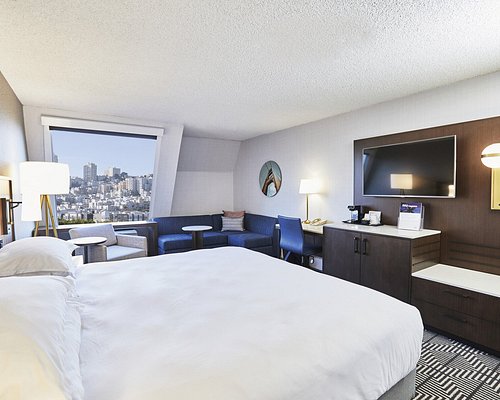 Priceline
View Deal
Free cancellation
Reserve now, pay at stay
Booking.com
US$238
getaroom.com
US$211
Hotels.com
US$238
View all 20 deals from US$211
5,895 reviews
1.8 km from Bel Air Hotel
We compared the lowest prices from 20 websites
Great value today
Calista Organic Hotel
US$131
US$78

We booked this hotel for a last minute trip to San Francisco because of the low price and availability of en-suite rooms (more on that later). The website we booked through (Booking.com) contained many poor reviews of the hotel, and our experience certainly lived up to them.

Upon arrival, we were a little surprised to find that guests are unable to open the front door to the hotel from the outside - it must be opened by a member a staff from the inside. As we later found out, this is due to the questionable neighboured in which the establishment is located. Once we had checked in and paid in the lobby (a relatively smooth process) which has a distinct smell of curry, we were shown to our room which was underwhelming to say the least.

There is very little about the room which can't be faulted in some way: the bedsheets were stained, as were the towels, along with the carpet. The television shows very few channels, which may have been a good thing seeing as we had to unplug it to charge our phones because there was only one socket in the room which didn't have an applicable plugged into it. We kept the curtains closed to cover the mould on the windows, however they could unfortunately not protect us from the cracks in the walls all around the room.

Our 'en-suite' didn't quite live up to expectations, as it merely contains a toilet, a bath which didn't have a hose with which to wash (although it did have a cockroach at one point), and a distinct smell of cigarettes (which could also be found throughout the rest of the building). Not only did the bath not have a hose, but also lacked a shower, which was conveniently located either 1 or 3 floors above us - my friend attempted to use this on the first morning, but we went out and bought dry shampoo after she returned declaring it "the worst experience of her life". For some reason which we could never quite work out, the bathroom sink was rather inconveniently located in the main bedroom, although I did at one stage manage to wash my hair in it.

The reason that we gave this hotel two stars rather than one is that we can't fault the staff, who were helpful throughout, and the location (although dodgy) was conveniently nearby to Union Square and the nicer areas of town.

If you're looking for a hotel simply to sleep in on an incredibly tight budget, this will do, but otherwise you're probably better looking elsewhere.

As others travelers have mentioned, this place is a real dump. It is also located in a relatively unsafe neighborhood. Around the corner you will find homeless camped out on the sidewalk at night. Because of that you may smell urine while walking the area. During the day there are soup kitchens down the street and around the corner at a church. There is a police substation located a block away around the corner but I didn’t see any police presence on the streets.

When you check in the receptionist will ask if you want to inspect the rooms before checking in. I think they do that because of the bad reviews everywhere so you know what you are getting into if you decide to stay there. I checked out the room, checked the bed and mattress for critters and found none so I decided to stay. There is an old elevator and supposedly they don’t run it after midnight. My room was simple, bed, dresser drawers but no tv, a/c or fan. Beware, I paid extra for a room with a private bathroom but my bathroom had a toilet and tub but no shower. They said that I could use the shared bathroom down the hallway but I just took a tub bath.

After checking out the view I closed and locked my window and drew my curtains because there was a fire stairway next to it and I didn’t want anyone looking or coming into my room. There is a “guard” at the entrance of the hotel at all times. When you leave the hotel, whether night or day you have to drop off your room key with the guard. I think they do this to prevent duplication of keys. The guard was nice enough to let me use the elevator even though it was after midnight. My stay was uneventful and I would consider staying there if I can’t find anything better. Beware as check out is at 10 am.

I gave this place a poor rating (instead of terrible) because I didn't encounter any problems or difficulty that others received.

As other posters have mentioned, the hotel staff can be a little “sensitive” so try not to get into any situations with them.

I wouldn’t recommend this place for families, nor couples or single females. If you are on a budget and not selective then this place is sufficient, one half step above hostels (you get your own room) but with little amenities. Unfortunately hotels in San Francisco are expensive so be aware that more acceptable hotels will probably cost over $100 a night. Just remember that you get what you pay for (I paid $65 a night) so try to have low expectations and you won't be disappointed.

This review is the subjective opinion of a TripAdvisor member and not of TripAdvisor LLC
komissarova88
57
Reviewed 14 October 2015 via mobile
Run for your life.

My boyfriend and I were looking for a last minute hotel on our drive from pacific route 1. This hotel came across on booking.com so I called them to find out if there are rooms still available for same night with a bathroom. The man who picked up the phone gave me a massive attitude saying "can't you read what it says on booking?" After I hung up the phone, we still decided to book it and give it a try since we only needed a place for 8 hours before our flight back. As we approached the neighborhood there were homeless people and drug addicts everywhere, as we entered the hotel the check in counter was covered by a bullet proof glass. That same man who was rude to me on the phone was checking us in, and he told me " I don't see your reservation" . I told him I made a reservation an hour ago and gave him my phone. I don't remember what he said to me but it was really out of line and unprofessional so I told him " you cannot disrespect women like that". After that he started yelling at me saying I have an attitude and he's refusing service to us. My boyfriend tried to come down the situation but that vulgar man cursed my bf out and chased us out of the hotel running outside after us yelling "come back I'll stab you". I have been around the world , and I have never seen such a disrespectful man. He was brought up to disrespect women. I would never suggest this hotel to anyone , and especially if you are traveling with a female.

I spent 3 nights at this hotel (from 21 Sep to 24 Sep 2015). So terrible. There were lots of bedbugs that bit my husband and me on our backs, arms and legs. We can not sleep well all nights. The room is so dirty with bad smell. Never stay in this hotel again.

This review is the subjective opinion of a TripAdvisor member and not of TripAdvisor LLC
Caoilfionn M
49
Reviewed 16 September 2015
A halfway house at best, not a hotel, avoid at all cost

I give this place 0 stars if that was an option!
My partner and I were booked in for 8 nights in the hotel and jumped at the price because SF is a very expensive city to visit. It was close enough to the train station to walk there with our bags, that was the only good thing. We walked through the Tenderloin area where the hotel is situated and would suggest to anyone traveling to avoid the area, not just the hotel, at all costs. We were approached and asked whether we'd like to 'score' four times before setting foot on the same block as the hotel. There are homeless everywhere, it smells of urine and feels very unsafe for two young-adult travelers (glad we don't have children). We got the hotel and were asked to leave our bags in the lobby and 'inspect the room' before our stay, red flag number one. My partner stayed with the bags and I climbed the stair to the room. There is no elevators so getting our bags up would've been a nightmare. It was a room on the 3rd floor and we'd booked an ensuite. By this, they mean a bathtub and a fallen apart sink. The room was mouldy, the window was broken, walls had large paint chips and cracks and loads of stains (red flag number two). There were shady looking people constantly walking through. The is a rule also that each morning you must return your key to the reception when you go out, red flag number three. We wanted a shower and that's why we paid extra for an ensuite. This was a deal breaker but we still agreed to stay because we'd lose our deposit and SF is very expensive (although we didn't want to). My partner told the woman at reception (protected behind a bullet proof screen mind you, red flag number four) we were disappointed there was no shower and they should advertise this. She replied that there are photos online and maybe we should use our eyes, threw a hissy fit and kicked us out! Luckily we didn't lose our deposit but this meant we had to cut our SF trip short as finding last minute accommodation was hugely expensive so it was easier to make arrangements in another city. I realised after I'd calmed down that this place is actually a halfway house dressed as a hotel to make a few extra bucks. I've asked for this place to be delisted from every site you can book it through because of this. I ignored the reviews and it ruined our SF trip, don't make the same mistake.