US$139
US$120
View deal
PricelineUS$137
Country InnUS$137
getaroom.comUS$139
View all 17 deals
Prices are provided by our partners, and reflect nightly room rates, including all taxes and fees known to our partners. Please see our partners for more details.
Payments made by partners impact the order of prices displayed. Room types may vary.
R5875CLbrendaf
1

Front desk clerk was dressed in leggings and a sweatshirt which is very unprofessional and not typical of what you expect to see in a decent hotel chain. Room was booked through Trip Advisor. Immediately upon entering room we noticed bugs on the table and wall. Hotel didn’t authorize free cancellation and we have received a refund from Trip Advisor.More

Thank you for posting a review. We are saddened to hear that your stay was less than satisfying due to the service you received from the hotel staff and the cleanliness of the room at that time. This is not the kind of experience we would want you to have. Know that your voice has been heard and this will be forwarded to the hotel management for further improvements. We hope for another opportunity to make a more favorable impression in the future.

Report response as inappropriateThank you. We appreciate your input.
This response is the subjective opinion of the management representative and not of TripAdvisor LLC
See all 736 reviews
Payments made by partners impact the order of prices displayed. Room types may vary.
Nearby Hotels 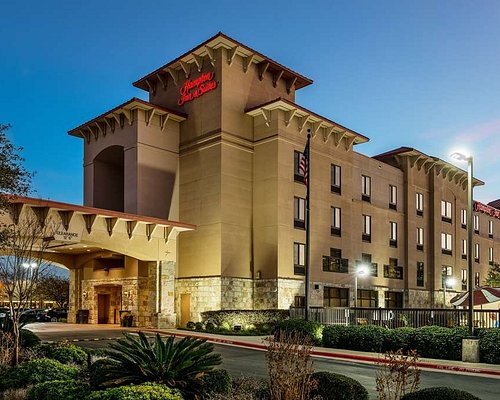 Taking safety measures
We compared the lowest prices from 19 websites
All Inclusive
Embassy Suites by Hilton San Marcos Hotel Conference Center & Spa
US$236
US$223
Tripadvisor
View deal
Pay up to 12X
Expedia.com
EmbassySuites.com
US$223
Lol.travel
US$236
View all 20 deals from US$223
1,537 reviews
3.6 km from Country Inn & Suites by Radisson, San Marcos, TX

Do not stay here. I can’t describe how dirty this place is. When we arrived our rooms weren’t ready, even though it was after check in time. When we finally got our rooms, they were disgusting. Hair was everywhere, the sheets had a brown tint to them (supposed to be white), the walls had wet splotches on them, there were no towels, the floor was damp, and I could go on. When we asked for towels we were simply told there were no more. The elevator was in and out of order the entire weekend. All of that is understandable in some ways, but the worst is that we were quoted a wedding party rate, that was supposed to be $94 a night, but we were charged $174 per night. We were told to come see the manager the next morning and the manager would personally change it. That was 3 days ago and the manager has not been in yet. We keep being told “the manager will be in tomorrow.” The manager hasn’t shown. We are now back home and keep calling, and are being told, “try again tomorrow because they’ll be in.” We want our card refunded and I even wrote that on the contract, that the price they were charging me wasn’t what I was quoted. All other wedding guests were given the right rate.
One wedding guest came back after rehearsal and found all their personal luggage out in the hallway with another family staying in their room! They had just given the room up.
No one has offered to contact us. Nothing has been done to help. This place was disgusting and not worth 20 dollars per night, much less $174. I’m calling corporate today to explain someone needs to do something about how horrible this place is. A full refund is about the only thing that would make this better. This was one of the worst places I’ve stayed at.
The one saving grace were the two front desk workers. Both young ladies were doing their best, were professional, and very polite. They were incredibly apologetic and you could tell none of our issues were their fault. They deserve a raise. We would have left if it weren’t for them.
I’m not one to write reviews, but when a place is this bad, others should know. Stay away! Don’t have the same things happen to you! If someone contacts us, I’ll edit this review to show that. Until then, this is the stone cold truth.

Thank you for taking the time to reach out to us. It is a delight to hear that you were pleased with the two front desk staff. On the other hand, we are saddened to know that your experience was anything less than satisfying due to multiple issues that you encountered such as the cleanliness of the room and bed, the condition of the elevator, the service that you received from other staff and the charged at that time. We want you to know that this is not the kind of experience we would ever want you to have at our hotel. Please accept our sincerest apologies for any expectations we may have failed to meet. We hope that you will reconsider and give us another chance to provide you an experience that is truly excellent in all aspects.

Report response as inappropriateThank you. We appreciate your input.
This response is the subjective opinion of the management representative and not of TripAdvisor LLC
SandraSye123
1
Reviewed 17 October 2020 via mobile
Loved my visit

This hotel was a fair price for what you are getting. Breakfast was simple but COVID friendly. The front desk lady in the morning was super sweet and accommodating. Will definitely be going back. Thanks to the front desk lady we were able to get rooms next to each other which helped a lot since we had kids with us.