US$140
View deal
Free cancellation until 21/05/21
Reserve now, pay at stay
eDreams
Travelocity
Booking.com
View all 12 deals
Prices are provided by our partners, and reflect nightly room rates, including all taxes and fees known to our partners. Please see our partners for more details.
Payments made by partners impact the order of prices displayed. Room types may vary.
Stephen L
Cambridge, United Kingdom
392134

I can't understand the negative reviews. Welcomed to the hotel by friendly staff and allocated a really comfy well equipped room on the second floor. Bed was great. Sent on my way the following morning after a super well cooked breakfast.

See all 286 reviews
Payments made by partners impact the order of prices displayed. Room types may vary.
Nearby Hotels 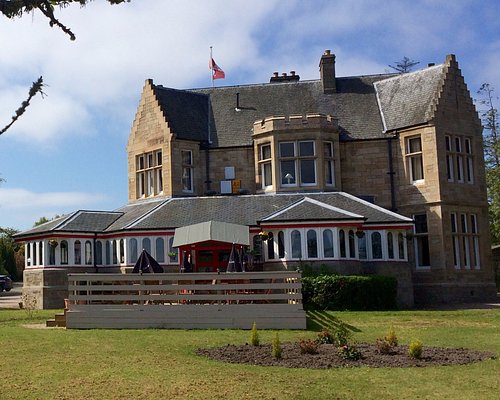 Expedia.com
View deal
Free cancellation
Reserve now, pay at stay
eDreams
US$489
Booking.com
US$489
Hurb
US$512
View all 15 deals from US$489
133 reviews
10.8 km from Royal Hotel
We compared the lowest prices from 15 websites

Hotels.com
View deal
Booking.com
US$214
ZenHotels.com
US$198
Expedia.com
US$210
View all 16 deals from US$198
294 reviews
0.6 km from Royal Hotel
We compared the lowest prices from 16 websites
Breakfast included
Golf View House

When we arrived the lady behind the desk was lounged on a chair with her feet up on another chair. She couldn't find our reservation so 'phoned somebody. A man came from upstairs and ignored me to ask my husband whether he had booked a twin or double room. I had booked this holiday in its entirety so replied that it was a double room. He looked at the system and ignored me again to say to my husband it was actually a twin. I showed him the communications I had had on the app where he had said he would accommodate us in a double room for the same price of a twin room. He gave us our key and gave us directions.
There was no mention of any COVID arrangements nor were there any signs at all of PPE, santizer or social distancing measures.
The room was dated and over full of furniture but OK. What alarmed me though was the use of two extension cables running around the room to run the TV, kettle and bedside lamps. Surely not that safe. The coasters on the bedside tables were "Best Dad" coasters and seemed most odd.
We asked if we could make a reservation for dinner but were told that they weren't serving dinner but could get the local kebab place to deliver if we wanted.
Breakfast the next morning was served by a man with no mask etc but the food was ok. That same man though was also manning the front desk!
When we went to check out he tried to charge us to which I replied I thought I had already paid. He said if it was through booking.com it wouldn't have been paid for. I checked the app and it quite clearly stated "Paid in Full"
We wouldn't return here.... it needs some serious attention on all counts before it is worth the money they are charging.

Disappointed as the hotel is in real need of upgrading. Bedroom looked as if it had new wallpaper but that was it. Good location with parking but due to being on main road a bit noisy. Appreciate it is an old building but too many electrical extensions make it a fire hazard. Only covid restrictions appeared to be hand sanitizer. Buffet breakfast not ideal. Hot breakfast was fine. Bedroom spacious but could do with less furniture. Clean bedding and towels. Bucket chair needed the bin as it was burst, moved it to close curtains and leg fell off it. Bathroom not clean, hairs in bath and tiles. Not worth £100 a night. Would not go back.

This review is the subjective opinion of a TripAdvisor member and not of TripAdvisor LLC
294aileenc
Glasgow, United Kingdom
731426
Reviewed 10 August 2020
An "Ok" Stay

We were only staying for one night and we found the hotel to be pretty average. The beds were comfortable enough but the place is in need of some TLC. The shower is hopeless so we used the bath. What would probably put me off going back, at least for a time was that there weren't many measures in place regarding covid. Breakfast was pretty average and was buffet style. This is not actually allowed during this period of time and different measures should be put in place. . Milk jugs etc were on a bar counter for visitors to help themselves and everyone was using the communal toaster so this isn't ideal. Also the condition of the hotel did not justify the room rate so it wasn't great value. What I would say though is that the owner was so friendly and welcoming and did try hard to make our stay as comfortable as possible.

This review is the subjective opinion of a TripAdvisor member and not of TripAdvisor LLC
498lucys
8243
Reviewed 24 July 2020
Not the best experience!

I arrived at the Royal Hotel to check in and was greeted on reception and given my key. I was told that the restaurant was closed and was presented with a takeaway menu for a local kebab and chicken shop instead should I wish to order dinner. The hotel lobby smelt a little odd and the first floor had a lingering odour of stale cigarette smoke.

I went up to my room which, on first glance, was a little dated but perfectly fine. The sheets on the bed looked clean. However, I did notice that the carpet had not been hoovered and that there was a layer of dust on the surfaces. I sat down on a chair which was ripped and the leg gave way under me (and I’m not overweight, I promise!). The towels appeared clean but had been put on top of an electric radiator which was covered in dust. I also thought it a little odd that the kettle was on the floor as the flex did not reach to the table top, so you had to boil the kettle on the floor.
The bathroom was dated but again, acceptable to the naked eye. When I went to wash my hands, there was a brown water mark around the taps which had not been cleaned. The bath plug had orange mould growing on it. I then went to put something in the bin and there were things in there from the previous guests.

As we are still in the midst of a global pandemic and cleanliness in hospitality is of even greater importance than in pre-COVID times, I thought I would ask if they had an alternative (clean) room that I could try (bear in mind that room had been priced at £100 for the night).
The gentleman on reception apologised, handed me two keys and said I could take my pick of these two rooms. I went to the first room and as I opened the door, I suddenly realised that there was someone in there! Clothes and belongings on the chairs and the bathroom light was on with the door closed. I took a swift exit, grateful that the encounter wasn’t nearly as awkward as it could have been! At this, I decided that I’d rather check out and find alternative accommodation for the evening. I went down and explained that there was someone in the first room that I had tried and that I did not feel totally comfortable staying in the hotel as I had not been reassured that it was clean and Covid-safe for guests. There were no visible measures taken by the hotel to mitigate the risk of infection spread; no hand sanitiser available and no members of staff wearing any PPE.

As I was explaining this, a man from the local takeaway shop entered the lobby and said “food delivery for room 37”... I looked down at the other key in my hand for the second room that I had not yet tried... Yes. It was the key to room 37. Which was also obviously occupied! I couldn’t help but laugh a little with the staff on reception. I checked out and found accommodation elsewhere in the town.

It is such a shame that this hotel, perfectly situated in the centre of town with an impressive exterior, is clearly in need of refurbishment, higher standards of cleanliness and more efficient management systems. I don’t really understand how it has had 4* reviews from previous guests. It is not fit for purpose.

Sadly, I spent a grand total of about 40 minutes in the Royal Hotel and I will not be returning.

This review is the subjective opinion of a TripAdvisor member and not of TripAdvisor LLC
tonymctighe
Dundee, United Kingdom
2628
Reviewed 7 March 2020
Investment NEEDED

Stayed her for 5 nights through work and the place is VERY tired and run down to the point it maybe to late to save this building!
My room was noisy and the mattress was hard as steel, it seriously has seen better days.
The building has sunk in several places making the floors very uneven, one night during my stay there was no heating in the dining area and no hot water to wash/shower due to running out of heating oil for the boiler !
The food was bland and mediocre at best, definitely cheap and inferior produce being used.
The only good thing about this place is that owner does however have a substantial selection of whisky on show behind the bar.

Would I return by choice? No