This place is worse then a dump!!!! OMG we only stayed one of the two nights because the rooms were so bad. We didn't have much choice but to stay the first night. We went to the store and bought new pillows, sheets and towels to use. We talked to them about refunding our money and have nothing but a run around. The staff is rude, every time I have called at the time I was told the manager will be there he never is and now they will not even answer the phone. When and if they answer they don't answer my question they just hang up on me. There was shot gun shell casing in the parking lot!!! The rooms smelled so bad, our kids room had a big hole in the ceiling, there was no ceiling tile even and there was black mold around the toilet seat!!!!!. We was there for the NASCAR race so if you are going there for that DO NOT STAY HERE!!!!!!!More

Show less
See all 13 reviews
Payments made by partners impact the order of prices displayed. Room types may vary.
Nearby Hotels 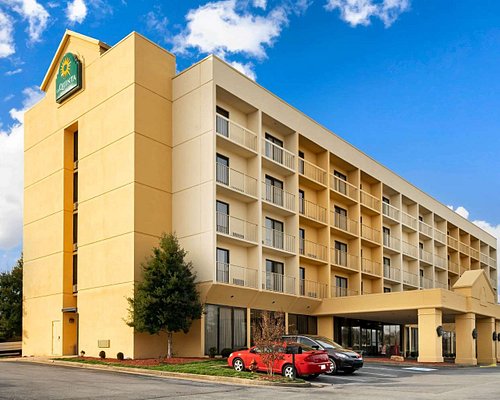 Breakfast included
Sleep Inn & Suites Kingsport Tricities Airport
US$101
US$84
Booking.com
View deal
Expedia.com
US$99
Agoda.com
US$84
Hurb
US$101
View all 17 deals from US$84
187 reviews
13.8 km from Westside Inn
We compared the lowest prices from 17 websites
MeadowView Conference Resort & Convention Center
US$185

Don't stay here just pass it by. Service was awful. We got our money back and left. Room was awful! I wish I had a picture to show how terrible it was... Bed was broken, the walls look like there was a liquid running down them, and it smelled. If that doesn't bother you The crazy wild people outside will. Most seemed to be high or drunk.

This review is the subjective opinion of a TripAdvisor member and not of TripAdvisor LLC
Mountains4me_9
Boones Mill, VA
4
Reviewed 19 June 2017 via mobile
No!

I'm not very picky.. I usually like to save some cash than to spend it on motel rooms.. but I will not stay here again. Constantly fighting in the parking lot, people walking around begging for money or a ride somewhere. The rooms are dirty and smell moldy. Staff not very friendly. It's a place to sleep and take a shower but don't expect a nice place. I'm sure there are better places in the area for not much more money.

This review is the subjective opinion of a TripAdvisor member and not of TripAdvisor LLC
Bas1855
Dayton, Ohio
112
Reviewed 23 June 2016
Don't stay here!

Dirty! Sink plumbing held together with duct tape. A hole in the bathroom door and wall. Bed extremely uncomfortable! Nastiest place I've ever stayed at. It's quite obvious that most of their business is from renting rooms by the hour. In other words......prostitutes and people cheating on their spouse. I would rather sleep in my car then stay at this dump. I only gave it one star because there was nothing lower to rate it. The place should be condemned as a health hazard.

prostitutes and bed bugs what more can I say Bad location. Right next to an undesireable bar A very undesireabale hotel! should be torn down! Never, ever bring your family here. In fact, you should never,ever go there.

This review is the subjective opinion of a TripAdvisor member and not of TripAdvisor LLC
Micheal S
112
Reviewed 16 March 2015
Pimps and prostitutes galore!!!! If your in the market for that then stay, if not keep on driving

Nasty Nasty Nasty.
NOT just the rooms but all the nasty women running around nearly naked and taking guys from the parking lot to their rooms for 30-60 minutes and then an hour later another man shows up and they escort him to their room. Doesn't take a rocket scientist to figure out what is going on there.
So if you want to stay in a dump of a motel with "pro" running around the parking lot, their pimps hovering in the hallways while they do their business then this is the place for you.
We saw their billboard off I-26 and since it was only 1/2 mile we went there, price was decent UNTIL we got in the room, after passing two black men standing directly outside two different rooms on their phones and their ears up against the door. So that was a BIG red flag. Next thing I know a dud pops out of the room near us cussing about being ripped off and the black man started following him out.
live and learn, just don't stay in this DUMP!!!!