Trivelles Mayfair
Lowest prices for your stay
US$48
View deal

US$51
US$44
View deal
SAVE US$7
FindHotelUS$44
TravelocityUS$44
Trip.comUS$51
View all 15 deals
Prices are provided by our partners, and reflect nightly room rates, including all taxes and fees known to our partners. Please see our partners for more details.
Payments made by partners impact the order of prices displayed. Room types may vary.
S0fieQ
Norton, United Kingdom
2632

A very dated hotel. It’s a shame because the staff were really nice.
The conservatory is an absolute eye sore as you pull into the car park - it really needs sorting out. There’s cardboard up at the windows and it’s filled with junk.
Our shower was hanging off the wall in the bathroom, as was the shower door, the smaller hand held shower didn’t work, the towels smelled horrendous (musty), lampshades missing from lamps, very cheap furniture that would definitely collapse under too much pressure and finally, stains all over the carpets.
We paid £100 for one night as we were going to a show in the city, and we stayed out longer than we usually would as we were reluctant to go back to the hotel...
I wouldn’t stay there again. More

Show less
Trip type: Travelled as a couple
See all 163 reviews
Payments made by partners impact the order of prices displayed. Room types may vary.
Nearby Hotels 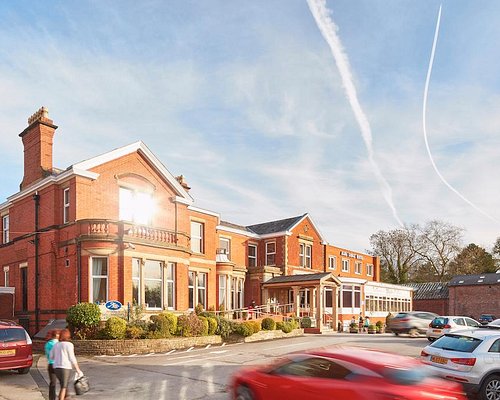 We stayed here as visiting family in area we found price reasonable great parking and tidy room the shower were clean and I had a small issue but staff resolved it straight away
You get a fridge and microwave in your room and they have hairdryer and also a tuck:food machine for drinks and food way places are closed you are also close to town center
Bed was comfortable and sheets clean

This review is the subjective opinion of a TripAdvisor member and not of TripAdvisor LLC
John L
Glasgow, United Kingdom
35
Reviewed 7 May 2019 via mobile
More like a hostel

I stayed one night thought about leaving before i even got to my room.The place is so dated & rundown i think it's a homeless hostel (no offence to homeless).Never 3 stars.No staff after 23.00 phone number after this time.lovely big conservatory full of junk, car park full of weeds,water feature no water but does have astro turf.Never will i consider this place next time im in Manchester.

This review is the subjective opinion of a TripAdvisor member and not of TripAdvisor LLC
mimimacushla
Welwyn Garden City, United Kingdom
7554
Reviewed 16 April 2019 via mobile
Wouldn't bother

Very very tired hotel. Will not be stopping again. No black out blind that where stated bathroom floor lyno all bumpy and coming up lamp shades all ripped and hanging off net curtains falling to bits looked like a knocking shop front window and what tops it off I oaid extra for a superior room

This review is the subjective opinion of a TripAdvisor member and not of TripAdvisor LLC
tony k
Frinton-On-Sea, United Kingdom
147378
Reviewed 19 February 2019
Most reasonably priced within 10 mile radius..

This hotel has no bar or restaurant and no lift. It is simply somewhere to stay. Having said that it is actually a pleasant place, nice and quiet, large rooms with kettle, microwave, and fridge and tea and coffee supplied. There's a large TV with plenty of channels. There is free good WiFi. The room is clean and bright and is serviced every couple of days. Clean towels and a nice shower with lashings of hot water. There's a sort of obscure church next door that only has services for an hour or so a week so the hotel is nice and quiet. The private car park is by the entrance and is nice and spacious. No complaints, but the hotel is let down by a scruffy neglected rubbish-strewn garden all round. This hotel is definitely worth the money.

This review is the subjective opinion of a TripAdvisor member and not of TripAdvisor LLC
Joe B
Bath, United Kingdom
62
Reviewed 13 February 2019 via mobile
Trivelles Mayfair, Stockport - fair price great location

I’ve passed this so many times when needing to stay in the Stockport area, the Heaton area specifically. Hotels around this area are fairly expensive and you need to book at least a couple of weeks in advance to be able to get a room.

Trivelles Mayfair is in a great location for access to motorways, Stockport Town Centre or really quick trains into Manchester. The price was under £40 for the night and short notice booking online wasn’t a problem. You get what you pay for in life but I thought for the good value for money I was satisfied. Many thanks.