US$343
US$326
View deal
PricelineUS$343
FindHotelUS$323
eDreamsUS$343
View all 19 deals
Payments made by partners impact the order of prices displayed. Room types may vary.
Prices are provided by our partners, and reflect nightly room rates, including all taxes and fees known to our partners. Please see our partners for more details.
RonnieO17
Philadelphia, Pennsylvania
3520

This hotel is perfect if you are staying in town for Hershey Park. We came for Christmas Candylane and booked pretty last minute on a whim. We had requested adjoining rooms but since we checked in later in the day, there were none left. The woman at the front desk was wonderful and she was able to grab us two rooms right next to each other so it worked out perfectly. All of the staff were very accommodating and did a phenomenal job especially now with Covid restrictions and being short staffed. The rooms were spotlessly clean, roomy and perfect for our stay. We made use of the bistro for breakfast which was excellent as well. Overall, we had a wonderful stay and we would not hesitate to visit again.More

Show less
See all 247 reviews
Payments made by partners impact the order of prices displayed. Room types may vary.
Nearby Hotels 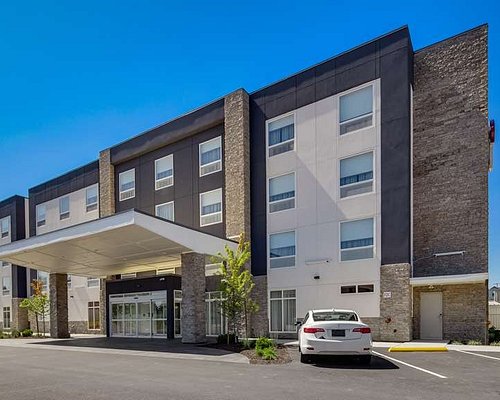 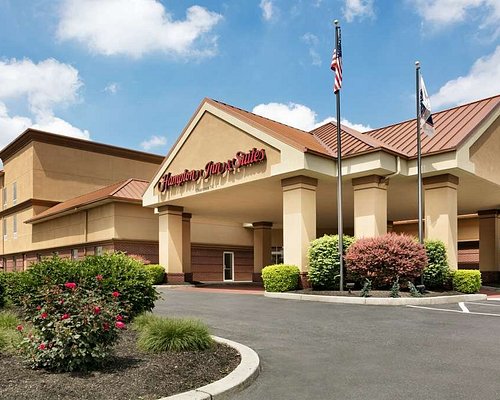 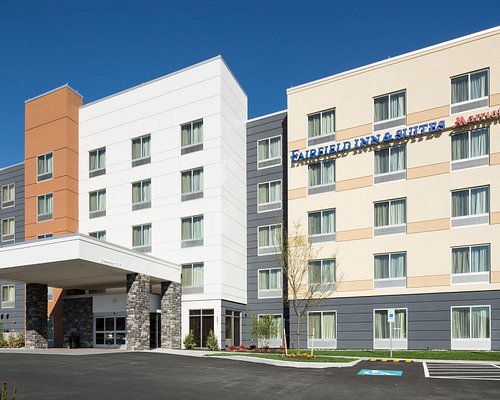 Expedia.com
View deal
Free cancellation
Pay up to 12X
SpringHill Suites
US$221
Booking.com
US$221
Travelocity
US$221
View all 19 deals from US$221
425 reviews
4.5 km from Courtyard Hershey Chocolate Avenue

Expedia.com
View deal
Free cancellation
Reserve now, pay at stay
BestWestern.com
US$254
Booking.com
US$254
Hotels.com
US$254
View all 13 deals from US$254
32 reviews
2.6 km from Courtyard Hershey Chocolate Avenue
We compared the lowest prices from 13 websites
Breakfast included
Comfort Inn at the Park
US$176

Expedia.com
View deal
Free cancellation
Pay up to 12X
Booking.com
US$178
Etrip
US$162
Traveluro
US$191
View all 18 deals from US$162
589 reviews
4.8 km from Courtyard Hershey Chocolate Avenue
We compared the lowest prices from 18 websites
Breakfast included
Sponsored
Super 8 by Wyndham Hershey
US$159

Expedia.com
View deal
Free cancellation
Pay up to 12X
Booking.com
US$129
Agoda.com
US$100
Hurb
US$151
View all 19 deals from US$100
434 reviews
4.6 km from Courtyard Hershey Chocolate Avenue
We compared the lowest prices from 19 websites
Breakfast included
Howard Johnson by Wyndham Hershey
US$176
US$154

Stayed with my husband for two nights (12/19,20). Very nice and definitely would return. So close to the Hershey attractions! Staff was very welcoming and pleasant. The room was clean and nice. Felt safe and we slept comfortably. Our room was right next to the elevators, which ding. Reception advised us beforehand because people complain. We had no problem whatsoever. Didn’t hear anything at all from the hallway/elevators during the night. We would recommend to anyone- families, business, etc.

This review is the subjective opinion of a Tripadvisor member and not of TripAdvisor LLC.
AmandaB916812
11
Reviewed 20 December 2021
This hotel is essentially holding my daughter's jacket for ransom

Our overall stay at the hotel was fine. We barely had any interaction with staff as we did mobile check-in. Room was clean. What's extremely disappointing is that we left my infant daughter's jacket in the room and they are essentially holding it for ransom. It's a 6-9 Month jacket and they're trying to charge me between $33-$46 to ship it back to me. I know that there is a cost involved with shipping a left behind item, but it couldn't possibly cost more than $10 to ship! I tried calling the hotel and they pawned it off on "corporate." I'm a gold elite member and stayed at Marriott properties often before the pandemic for both work and pleasure. Seriously reconsidering this after my recent experience.

This review is the subjective opinion of a Tripadvisor member and not of TripAdvisor LLC.
FF13
Sykesville, Maryland
465306
Reviewed 18 December 2021
Very Good Stay

Our stay at this Courtyard was planned for a brief visit to the area for two days mid-week. We were very satisfied with this hotel since it has an excellent location close to all of the local attractions right on Chocolate Avenue.

Our room was very nice. It was very roomy, clean, and attractive. The bathroom was also very modern and functional. There is no tub, just a walk-in shower. (The shower control is opposite from the shower head....quite a reach!)

The room temperature was very hard to adjust to our satisfaction. When we first checked in, the air conditioning was on and the room was very chilly. It took quite awhile for the thermostat to adjust to the heat setting and by later that evening, it was too hot. Not the easiest type of unit to adjust and very slow to respond.

We ate breakfast in the Bistro. Staff there was very friendly and prepared our requests promptly.

All in all, we felt our stay at this Courtyard was very good and it met our needs.

Room tip: The back rooms are on the quiet side away from the main road.
Ask FF13 about Courtyard Hershey Chocolate Avenue
Thank FF13

This review is the subjective opinion of a Tripadvisor member and not of TripAdvisor LLC.
homebrewer01
Frederick Maryland
127
Reviewed 13 December 2021
Hotel Staff are OUTSTANDING!!!

This was our second family excursion to Hershey Park, and my wife booked three rooms for us and our two adult kids' families. We had a wonderful time...not just seeing the local attractions, but being able to stay in a nice but small hotel nearby with a family attitude. Brandi at the front desk welcomed us and made sure all of us were checked in and everything was taken care of. In the am, the nice attendant at the breakfast bar went out of her way to ensure that our breakfast orders were done right for us. The manager came thru and asked if he could be of any assistance. At check out there was a minor error on a mis-billing for food, and Dee at the front desk fixed the problem immediately. We live about 2 hours away and being able to stay at such a nice hotel with great staff makes excusions like this a welcome break. Thx, Courtyard staff for all you did to make this a great mini-vacation!

Room tip: Just ask to be away from elevators--we did and all was good.
Ask homebrewer01 about Courtyard Hershey Chocolate Avenue
Thank homebrewer01

This review is the subjective opinion of a Tripadvisor member and not of TripAdvisor LLC.
simkids1
Washington DC, District of Columbia
1
Reviewed 4 November 2021
EXEMPLARY STAY--BEST PLACE IN HERSHEY!

I was looking for a quick stay near DC to surprise my daughter for her 18th birthday since we had been doing a scramble of college visits. My other daughter suggested this Courtyard since she said her soccer team stay a few years ago was "better than JW." As a platinum member, I was a tad hesitant when I read the recent reviews, but I figured it was only one night. After booking online, I called the hotel to ask if I could request an upgrade and mentioned it was my daughter's birithday. I have never asked since I'm usually an online check in/mobile key person, but the points didn't allow me to book a suite. Though Ryan H made no promises, he said he'd make a note.

We arrived at the hotel the following evening around 10:30pm, and Ryan was at the front desk.  He said he had been waiting for me since they had a cancellation on their extended suite (!)  He warmly welcomed us, handed my daughter a Marriott Courtyard pin and wished her a happy birthday, which she found touching.  The suite was huuugge, modern and, very well lit. But what blew her away was that there was a full cake, balloon, and card on the table when we entered the suite. There was a card from Laura M wishing my daughter a happy birthday with the note "Welcome to adulthood kiddo," which I though was a nice, personal touch. I went back down to thank Ryan again and to offer to pay for the items. He modestly and repeatedly turned down my request to pay or tip. Upon my pressing, I also learned that he had gone above and beyond by calling housekeeping in the morning to make sure they had received his note. Wow, just wow.

I recognize that my experience was because I'm a platinum member and made the added effort to call. However, as someone that has stayed at hundreds of hotels across the globe, I think customer service is really what makes a stay memorable. This Courtyard is a category 5 that punches way above it's weight. Yes, there's a bit of wear, the pool looked like it could be cleaned, and I wish they had glass shower doors instead of curtains, but this is a great hotel. Ryan and Laura made my daughter's birthday weekend truly special, and I doubt if I would have gotten the same treatment at the JW in NYC (even if I was titanium and offered to pay for the cake).  The customer service shown was exemplary--it just had that little extra personal warmth that made it one of the best stays in a very long while. My second posting on TA in ten years, but I felt compelled in order to recognize Ryan, Laura, and the rest of the terrific team at Courtyard Hershey.

Room tip: The spacious 2 room suite is well worth the extra $100 if there are more than 2 people.
Ask simkids1 about Courtyard Hershey Chocolate Avenue
Thank simkids1