Everything was WONDERFUL! - Review of Sandy Salmon Bed & Breakfast

US$258
Free cancellation until 22/04/21
Reserve now, pay at stay
View deal
Hotels.comUS$258
CheapTicketsUS$258
TripadvisorUS$258
FindHotel
TravelocityUS$258
Orbitz.comUS$258
View all 10 deals
Prices are provided by our partners, and reflect nightly room rates, including all taxes and fees known to our partners. Please see our partners for more details.
Payments made by partners impact the order of prices displayed. Room types may vary.
jasrockmama
Ontario, Oregon
76

The view of the two converging rivers from our room was absolutely beautiful! The hosts made us feel like family and the "cabin" was immaculate! There is a nice path down to the water, and a wonderful fish pond in the entryway of the home. There is also a gorgeous huge stone fireplace in the common room. We were passing through on business but it felt like a cabin vacation get-away. We didn't have time to enjoy the pool table and theater so we Will definitely stay again!

Room tip: Excellent views, from all of the rooms! Jacuzzi tub is nice, a bit small for a really tall person.
See all 64 reviews
Payments made by partners impact the order of prices displayed. Room types may vary.
Nearby Hotels 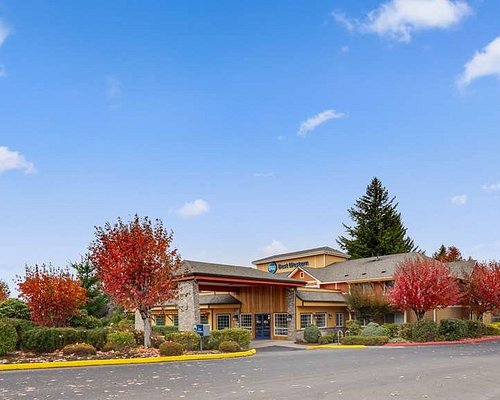 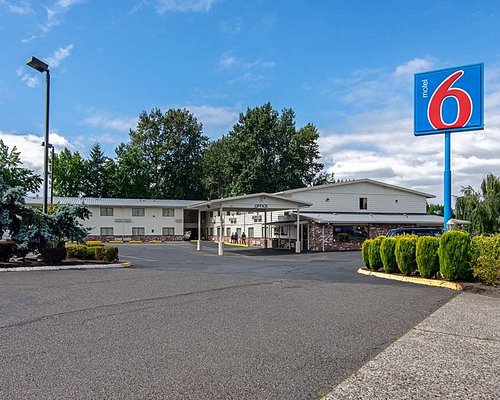 Expedia.com
View deal
Free cancellation
Pay up to 12X
HIExpress.com
US$97
ZenHotels.com
US$82
Priceline
US$97
View all 16 deals from US$82
166 reviews
33.8 km from Sandy Salmon Bed & Breakfast

This is a place where you can just kick back and watch the river. It is located in a forest next to the road.. However we could not see or hear the road from our room. It is located on a bluff that is 80 feet above the confluence of the Sandy and Salmon rivers. It is a short drive to Mt. Hood and Timberline lodge. In the area are some hiking trails. We just enjoyed being there. Breakfast was great and the hospitality could not be beat. The lodge has 4 rooms I think but we were the only ones there. Our room had a balcony overlooking the rivers (Fishing hole room) I would absolutely recommend it if yoiu want a place to just relax and do nothing. Has a large common room with fireplace. Good for couples.

This review is the subjective opinion of a TripAdvisor member and not of TripAdvisor LLC
Originalonso
Tarpon Springs, FL
11640
Reviewed 4 September 2017
A Beautiful Home Away From Home

We stayed in the Fishing Room (or similar name). We left the double doors open at night and slept to the sound of the two rivers and fresh air. This home has to be seen to be believed. It is that spectacular with all the natural elements and amazing décor - inside and out.

We ate breakfast with Jerry and the other guests, served family style by Maggie. Conversation and a warm feeling, along with a nice daily breakfast made for a new experience at a B&B. I felt like I was visiting with family.

The grounds outside and trail to the creek was absolutely beautiful. Although close to the road, we felt tucked away in the woods.

Maggie and Jerry made us feel like family for the two nights we spent here.

This review is the subjective opinion of a TripAdvisor member and not of TripAdvisor LLC
funtravelfun1234
Washington DC, District of Columbia
1411
Reviewed 10 August 2017
Mediocre stay – not for those who want to hike or have “special needs”

The OK: Proximity to road means calming river views are permeated by highway traffic noise. This bothered me more than my spouse.

The problems: Owners made us extremely uncomfortable during breakfast. Not recommended if you might ask for anything perceived to “inconvenience” them.

On arrival, we were asked when we wanted breakfast. We said 8-8:30 since we were on east coast time and wanted to get out hiking. They asked if we could do 9, and we said no. They were not pleased, especially when we asked for a vegetarian breakfast (we asked for plain scrambled eggs instead of the sausage quiche they planned; a simple request). We offered to eat breakfast elsewhere, and they said they would meet our needs “no problem” even though it was clear there was a problem. I did not sleep well because of this interaction, but the next morning everything was fine, and we even had breakfast more towards 8 am (we had already been up for over an hour, and another couple started breakfast shortly after us). The next night they saw us but did not ask if we had a different preference. Again, we were up early, but they seemed surprised and said if we had “special needs” we should have declared it on the website when we made a reservation (see note below as to why this was an impossible request). I have a visible-to-some “special need” and got so upset that I said we would just leave at eat breakfast elsewhere (I do not know if they were saying I was difficult because I had a “special need”, or my “special need” was getting up “early”). They said it would be no problem to serve us in 45 min, but we were already quite hungry and ready to go; they halfheartedly offered us toast on our way out. They said it was “no problem” that we were not having breakfast there as we left, and I said it was a problem for us, since we had paid for breakfast but were not eating it, and they had upset us a great deal. Luckily we were hiking by 9 and had a beautiful day, no thanks to our unrelaxing stay at Sandy Salmon.

Note: We booked through a third party website, and were not asked about food preferences or breakfast time. The owners said we should have booked on their website since they ask such questions. However, I called a week before to confirm my reservation and let them know what time we would arrive. No one returned my phone call and when I called back several days later I spoke with the owner. He said no problem to arrive late, and asked no other questions. I notified the third party website about their comments and they gave me a voucher because of these troubles (I am a regular customer and this is the first time I issued a complaint). Ultimately, asking for simple vegetarian items for breakfast at 8am does not seem unreasonable to me. The lodge advertises proximity to outdoor activities, and many outdoorsy people look to start before 10am! I cannot imagine how they would treat families with children who get up early.

This review is the subjective opinion of a TripAdvisor member and not of TripAdvisor LLC
boydnation
Birmingham, Alabama
43
Reviewed 19 July 2017
A Magical Place

We couldn't have had a more wonderful stay. The place is beautiful, the site is beautiful (be sure to take the trail down to sit by the rivers for a while), and the hosts couldn't be more welcoming and gracious.

So glad you enjoyed your stay, and YES.. it is Magical!

Report response as inappropriateThank you. We appreciate your input.
This response is the subjective opinion of the management representative and not of TripAdvisor LLC
Lisa-in-Victoria
Victoria, BC
329
Reviewed 22 June 2017
Beautiful Place

We stayed one night on our way to Bend. Jerry and Maggie were wonderful hosts and made us feel very welcome and at home. The house is very well laid out. We were the only ones staying that night so we had the place to ourselves. Walk down to the river - its lovely to sit and watch the water rush by. We ate breakfast together with our hosts which is a first for us. Lucky for us as we watched the squirrels and birds all through breakfast. Our room was very comfortable with a small deck with the river view. The place was spotless. Jerry and Maggie do it right! I would not hesitate to stay there again. (Note: Jerry was an avid hunter and many of his prizes are mounted throughout the house.)