Perfect for us - Review of Holiday Inn Express Roseburg

US$189
US$132
View deal
SAVE US$57
PricelineUS$157
Hotels.comUS$157
Lol.travelUS$189
View all 17 deals
Prices are provided by our partners, and reflect nightly room rates, including all taxes and fees known to our partners. Please see our partners for more details.
Payments made by partners impact the order of prices displayed. Room types may vary.
andesher
Seattle, Washington
6

We selected a king suite for my husband and me, plus our adult daughter and dog. It was perfect for us. Spacious, clean, comfortable, reasonably priced, and beautiful location. Dark and cold when we visited, but I imagine that the riverside patio would be lovely in the summer. Breakfast was all pre-packaged due to COVID, but another guest said there is typically a spectacular buffet breakfast. Pool, outdoor hot tub and fitness center all closed due to COVID, unfortunately. My experience with the evening person at the front desk was adequate - professional enough, but not very engaging.

Room tip: rooms facing the river are quieter and more scenic
See all 408 reviews
Payments made by partners impact the order of prices displayed. Room types may vary.
Nearby Hotels 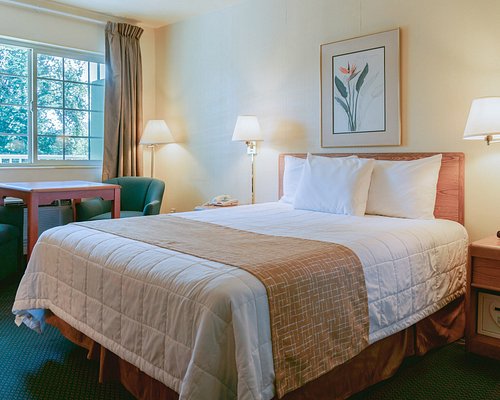 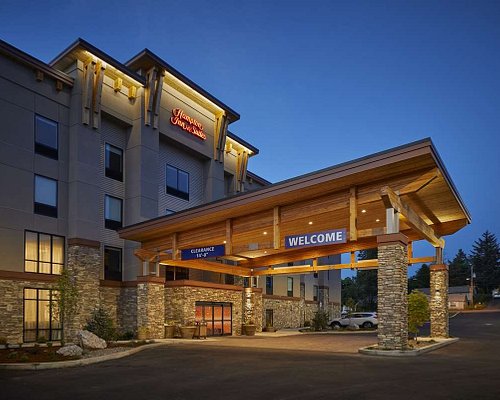 Expedia.com
View deal
Free cancellation
Pay up to 12X
Booking.com
US$145
Tripadvisor
US$145
StayForLong
US$168
View all 18 deals from US$144
233 reviews
2.0 km from Holiday Inn Express Roseburg
We compared the lowest prices from 18 websites

Expedia.com
View deal
Free cancellation
Reserve now, pay at stay
Booking.com
US$76
Tripadvisor
US$76
Hotels.com
View all 15 deals from US$76
183 reviews
4.0 km from Holiday Inn Express Roseburg
We compared the lowest prices from 15 websites
Breakfast included
Baymont by Wyndham Roseburg
US$122
US$99

We showed up kind of late on the first (and what turned into only) night of our stay. The parking lot was a mess and packed in ways usually only seen with hotels offering a "Park, Stay, Fly" package.
Our check in process was relatively easy.
When we got to the room we had issues getting the door to open. I had to go back and get the front desk clerk to show us how to open our "sticky" lock.
COVID is an interesting time and we have appreciated seeing how hotels have worked hard to make things work out. I do wish there were more breakfast options beyond a couple of cereal bars, a breakfast sandwich, and some dry cereal.
Upon returning from an appointment, my family told me that over the course of 2 hours they had killed roughly a dozen spiders, three more were crawling on the ceiling, and some weird grasshopper thing was in the bathroom.
Thankfully the staff were all to willing to let us check out and even comp'ed our room. Sadly that doesn't help when I have to take my daughter to the doctor today to handle a possible reaction to a spider bite. Hopefully everything will be ok.

In addition to the insect issue in our room I didn't like how the front door of our room didn't close behind us like at most hotels. Also, the locked door that let you come and go from the outside rooms to the inside of the main hotel would only sometimes require a key to enter.

The beds were ok for a hotel of this class. Could have been in better shape of course, but I've slept on worse over the years.

Thanks for choosing to stay with us among your many lodging options. We also appreciate your candid remarks.

While I am happy that you found both our bed’s comfortable and check-in seamless, I understand your dissatisfaction in the parking lot’s spaces, breakfast options and door issues encountered. I hope your daughter is doing okay now. It is great that our hotel colleagues did their best to assist with the inconveniences encountered, especially with the insect concerns.

Positive interactions are one of our pillars in ensuring an elevated experience for our guests. That said, I will immediately share your feedback to our hotel’s upper management for review and improvements in our amenities and services.

I’ve also sent you a private message that should now be in your inbox discussing your stay further.

Report response as inappropriateThank you. We appreciate your input.
This response is the subjective opinion of the management representative and not of TripAdvisor LLC
ak2id
Boise, Idaho
2612
Reviewed 3 September 2020 via mobile
Don’t bother, pick another hotel

The front desk staff both in the afternoon and in the morning seemed completely disinterested and almost annoyed by the guests. Very short, curt answers as if they were bothered that we were checking in.

They told us because of covid, that breakfast had changed and we could come down in the morning and get a breakfast sandwich to bring to the room. Then when we went down, around 7:30am they were annoyed and said they were out. Number of guests = number of sandwiches to plan on. It’s not hard to do that.

The hotel is old and dated, but we could handle that — as long as the staff doesn’t act like you are putting them out by showing up.

I have been a fan of HI Express for years but will start choosing another brand. Disappointed very much in this hotel.

Thank you for choosing to stay with us and for posting a candid review. I was very concerned to read your comments regarding the front desk service and breakfast experience. I understand your dismay and I am sorry. This is not the frictionless experience that we wanted for all our guests. I will make sure to share your comments with our team for the necessary improvements needed on our end.

I appreciate you as our guest and I still hope you would give us another chance in the future.

Report response as inappropriateThank you. We appreciate your input.
This response is the subjective opinion of the management representative and not of TripAdvisor LLC
lachoy20
Portland, Oregon
12
Reviewed 18 July 2020
Convenient Location but Poor Amenities

Ironically I wrote this review after I received an automatic survey from Holiday Inn Express, however it was blocked as it didn't meet their, "guidelines,"
I thought I'd repost here because everything I said was true and if I'd read this as a potential traveler, I'd rethink my stay. I didn't bring it up initially during my stay since I arrived close to 10pm at night, but I wish I had.

"I stayed here while driving down from Portland to CA. The location was convenient especially since I had my dog with me. However, once I was in the room there were several times I noticed a small bug here and there (an aphid, a spider, ants), which I've never had happen during my previous hotel experiences... Aside from that the room seem relatively clean, but when trying to turn the shower on both at night and again in the morning, the water was cold and never got warm. Also for the breakfast to go, I was told the breakfast sandwiches were being made, however after checking 4x during a 1 hour span before I left for my drive, they were never made. This hotel stay was just OK, but not sure I'd return or recommend it.
"

Thank you for staying with us and for writing to us. We enjoy providing you a simple but refreshing night rest.

I rewired your remarks and I am sorry for the trouble with the water temperature, and food service. I understand your disappointment because breakfast is the most important meal. I shared your comments with our managing team and have taken action to prevent these issues from happening again.

I invite you to visit us on your next travel.

Report response as inappropriateThank you. We appreciate your input.
This response is the subjective opinion of the management representative and not of TripAdvisor LLC
casabear
Burney, California
8158
Reviewed 2 July 2020
Beautiful view W/ dog access!

This hotel was absolutely beautiful. It was a little hard to get into the parking lot because it’s an immediate right turn off the freeway and a narrow driveway. There was plenty of parking, but not much of it was shaded. It was blistering hot out so that was inconvenient. Our hotel room was toward the back and east part of the building. The doors were very hard to open, you really had to lean on them to get them to shut. The room was on the lower level, which I was so grateful for because of my elderly dogs. When I walked into our room you could see outside the window and the gorgeous river view! I was so happy that we got such a lovely room. There was a door to the outside where you could just walk out onto the grassy area and look at the river. The grounds were so well kept, no dog poop in sight. My dogs really enjoyed it and it was so nice to be able to just walk out there to let them go potty. The room was very nice and a good size. There was a mini fridge, microwave and coffee maker in the room. They supplied plenty of pillows and the beds were very comfortable. They also provided plenty of toiletries and there was a shampoo, conditioner and body wash dispenser in the shower which I enjoyed. Everything was very clean and well kept. The only complaints I had were the tiny black bugs in the bathroom which I assumed was due to being so close to the river. They also did not have a lamp on the desk/table which made it hard to work on my laptop. No one told us about any breakfast options, so I am not sure if they provided that. We just drove to a restaurant nearby. I wish I could have stayed here longer because I really enjoyed it (except for the bugs). I would definitely come here again!

Room tip: Toward the back/east side is the best view!
Ask casabear about Holiday Inn Express Roseburg
Thank casabear

This review is the subjective opinion of a TripAdvisor member and not of TripAdvisor LLC
Bettyjo78
1
Reviewed 1 March 2020
Relaxing and refreshing!

A great stay! Room was spotless, and breakfast had an amazing # of choices. From fresh fruit, yogurt, pancakes, sausage, eggs and so much more. Coffee was great too. Big eating area and they even had to go bags. A quaint seating area overlooking the hottub. Quiet rooms being so close to the freeway. Also had an inside pool. Easy to find off I-5. Would totally recommend it. The staff were very friendly and helpful.

Room tip: We were by the ice machine and never heard a noise.
Ask Bettyjo78 about Holiday Inn Express Roseburg
Thank Bettyjo78