Not At All Recommended - Review of Super 8 by Wyndham Medina

US$71
US$64
View deal
Free cancellation until 11/08/21
PricelineUS$68
WyndhamUS$68
TraveluroUS$71
View all 17 deals
Prices are provided by our partners, and reflect nightly room rates, including all taxes and fees known to our partners. Please see our partners for more details.
Payments made by partners impact the order of prices displayed. Room types may vary.
conniesY8786XZ
1

Not At All Recommended

Not at all nice. The reservation was screwed up--they expected 3 adults to sleep in the same bed! They provided a cot which was short enough that a 5' 2" woman's feet hung off the end! There was supposed to be a continental breakfast. When we asked about it, we were told there was none by the unfriendly manager, but later some individually wrapped Hostess Twinkies were thrown on a shelf! We hung out a Do Not Disturb sign and staff went in out room anyway! They didn't make the beds, but they took away our used towels without leaving clean ones! They didn't even provide ample toilet paper! It also appeared that multiple people were LIVING at the motel. Is this a welfare motel?? It certainly could be...More

Show less
See all 373 reviews
Payments made by partners impact the order of prices displayed. Room types may vary.
Nearby Hotels 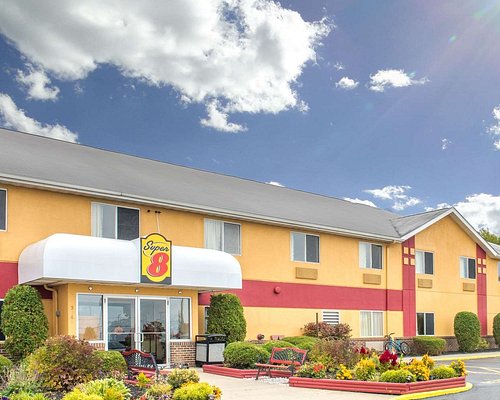 Taking safety measures
We compared the lowest prices from 17 websites
Breakfast included
Fairfield Inn & Suites by Marriott Medina
US$119
Tripadvisor
View deal
Pay up to 12X
Expedia.com
Booking.com
US$119
Fairfield Inn
US$119
View all 16 deals from US$118
48 reviews
0.8 km from Super 8 by Wyndham Medina

Expedia.com
View deal
Priceline
US$81
Trip.com
US$78
Lol.travel
US$101
View all 14 deals from US$78
113 reviews
0.2 km from Super 8 by Wyndham Medina
We compared the lowest prices from 14 websites
Breakfast included
Sponsored
Hampton Inn Medina
US$133

Horrible dirty. Very poor housekeeping. Way too much artificial deodorants used over powering. Nice to accept dogs. Uncomfortable with surroundings. Stayed with my sister til 10:30p to make sure she was ok

Unlike other reviewers, we didn't experience any smoke smell. Rented 2 rooms during a cross country move from CA to NH. Had 3 kids and 4 adults. Room fit us all comfortably.
Parking lot fit a 17ft Ryder truck w/car trailer - we didn't have any security issues.
The room wasn't as clean as it could be- found hair etc in the bath tub- so I highly doubt it was sanitized for COVID. I stayed at a much cleaner hotel that was cheaper, hence the 3 stars.
Wasn't bad, and I would stay here again.

No smoking rooms but yet it had sheets with burn holes! And any other hotel has 8 pillows 4 on each bed and this one had 2 on one and 3 on the other plus no elevator never in my life did I stay at a hotel that has no elevator.. never staying here again don't care how cheap it is step up your game super 8!!

We reserved a “non-smoking” room but the room had a very strong odor from smoke. Additionally, they placed the non smoking room above a smoking room so every time they lit up we inhaled smoke. Disgusting.

Review collected in partnership with this hotel
This business uses tools provided by Tripadvisor (or one of its official Review Collection Partners) to encourage and collect guest reviews, including this one.
Ask williamglass2020 about Super 8 by Wyndham Medina
1  Thank williamglass2020

Hotel needs updated but the rooms was clean, bathroom was clean and didn't have bugs. When making the wrong reservation, thsy worked with us on getting a room any way. Will definitely come back in the near future.

Review collected in partnership with this hotel
This business uses tools provided by Tripadvisor (or one of its official Review Collection Partners) to encourage and collect guest reviews, including this one.
Ask Uvernona M about Super 8 by Wyndham Medina
Thank Uvernona M