US$151
US$128
View deal
SAVE US$23
Hotels.comUS$132
PricelineUS$131
StayForLongUS$151
View all 16 deals
Prices are provided by our partners, and reflect nightly room rates, including all taxes and fees known to our partners. Please see our partners for more details.
Payments made by partners impact the order of prices displayed. Room types may vary.
BillUsma74
Canton, Georgia
254131

Fair for a Holiday Inn

This property is located on the west side of Murphy. It is a little hard to see at first, but once you know where it is, you can find it again. The staff was friendly and given the virus issues, it seemed clean and sanitized. The bed and pillows were excellent. We did have a maintenance issue with a stopped up toilet and the safety bar on the door was not very secure. That was disappointing.

See all 154 reviews
Payments made by partners impact the order of prices displayed. Room types may vary.
Nearby Hotels 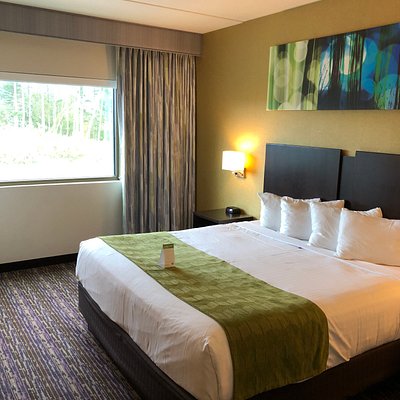 We stay at this hotel every year during Christmas while visiting family in the area. It is clean and located centrally for us. During this year's stay, we encountered a few issues that were frustrating. On the second morning, our television stopped working. We went to the front desk about 9 am to let them know. We told staff that we would not be returning until late that night and if we needed to change rooms, we would like to do it now. We were reassured that the tv would be fixed or the cable boxes switched out while we were out for the day. When we returned at 11 pm, the tv was still not working. We went back to the front desk and were told that no one had looked at it, as promised. So, we were forced to change rooms late at night, with two children. This was frsutrating due to the lack of follow-up. The room that we were switched to had multiple electrical outlets that were loose (the cord would not stay plugged into the outlet tightly). This was also frustrating, especially in the bathroom where you had to try to hold the plug in with one hand while drying your hair. This stay did not meet our expectations based on past visits.

First of all, thank you for visiting with us every year. Second, we want to apologize that this stay did not meet with your expectations. I will share your comments with the staff and we will analyze where the lack of communication occurred. We value our return guests and want their visits be exceptional. We hope to see you again at Christmas.
Happy New Year!
Susan C.
Guest Relations

Report response as inappropriateThank you. We appreciate your input.
This response is the subjective opinion of the management representative and not of TripAdvisor LLC
rogpeck2002
Winter Haven, Florida
788
Reviewed 12 December 2019
Friendly Staff

Went to visit family and needed a quiet hotel to decompress and this was it. Rooms were clean and quiet, looked as if they were recently renovated, and the staff were awesome and I wasnt to especially recongize Ms. Hope, she greeted me after a very long drive with her Southen hospitality and it brighten my day.

Room tip: Despite what is posted on Trip Advisor, they do NOT accept pets.
Ask rogpeck2002 about Holiday Inn Express Suites Murphy
Thank rogpeck2002

Thank you rogpeck2002 for leaving us a great review! I definitely will tell Ms. Hope your compliment. I will also let the staff know that you enjoyed your stay. Please visit with us again whenever you are in the area.
Safe travels,
Susan C.
Guest Relations

Report response as inappropriateThank you. We appreciate your input.
This response is the subjective opinion of the management representative and not of TripAdvisor LLC
dukefan86
Morrisville, North Carolina
18931
Reviewed 5 November 2019 via mobile
Nice Stay

This was our second stay in this hotel, and we enjoyed it! The front desk staff was friendly and helpful, and the bed was comfortable. The water pressure in the shower was awesome! The breakfast was convenient—I especially liked the oatmeal, with the option of adding goodies like walnuts, cinnamon, and brown sugar. Yum.

Thank you for taking the time to leave us a review! I will pass on the praise to our staff. We are here to make everything go smooth and it seems like we are doing what we are doing a good job. Please visit with us again and have safe travels.

Report response as inappropriateThank you. We appreciate your input.
This response is the subjective opinion of the management representative and not of TripAdvisor LLC
zacheryduncan19
Hixson, Tennessee
15437
Reviewed 3 November 2019 via mobile
Hiwasse Dam

We stayed here for one night while working at Hiwasse. I don't have too much to say other than that it was a typical Holiday Inn Express. My room was clean and spacious. The wifi seemed pretty legit. I didn't try any breakfast, but it looked edible. Wish I could say more.
By the way, if you have a big truck and trailer, then I recommend parking in the grass lot next to the property. Boom!

Thank you for leaving us a review. Yes, the grass lot next door makes a great truck parking lot. The breakfast is good so you can try it next time. Have safe travels!
Thanks again.

Report response as inappropriateThank you. We appreciate your input.
This response is the subjective opinion of the management representative and not of TripAdvisor LLC
jasondL7681VG
Leeds, Alabama
9213
Reviewed 14 October 2019 via mobile
Guys trip

On motorcycle trip with friends. Pulled into Murphy and found this hotel. Staff was very friendly and helpful on a place to eat dinner. Room was very nice and super clean. Breakfast was very good. Would stay here again if in the area.