Not bad but not really great

It's a good place to hang your hat at a cheap price. Owners are nice. Rooms however, need plenty improvement. It's a place where you rest your head. Make sure you air the room out. It's smells of mold and mildew. So bring your febreze. And some cleaning products just to be safe!!

Trip type: Travelled solo
See all 13 reviews
Payments made by partners impact the order of prices displayed. Room types may vary.
Nearby Hotels 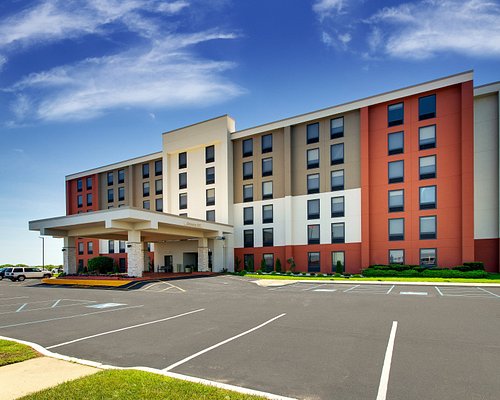 We booked the room online ( for 2 adults ) through a third party. Since it was a Saturday night, rooms near the boardwalk were either booked, or over 250. We arrived @ 10:00 pm. The older man, with limited English, seemed annoyed that we had stopped by. He called a young woman to the desk to look up the reservation. The words "service industry" and "friendliness" are not in her vocabulary. She informed us that we had a kitchenette ( which was not an option and had not been requested on the website) with one bed. we explained that we needed two beds. She told us at first that they were sold out, and couldn't offer two beds ( although there were over 60 rooms and only about 6 cars in the lot.) She then said that the two beds would incur an additional charge of 30.00 charge,which we paid. We could have spent an additional 10.00 for a good chain hotel across the street, but we would have lost our 50.00 pre-payment, and we were too tired after a long two days to argue. I don't believe that they have any intention of renting the rooms for two people for the price advertised on the third party site. Seemed like a bait and switch. Very basic room, probably last updated when Ronald Reagan was President. We did have a microwave and mini fridge, so I guess that passes for a "kitchenette."

This review is the subjective opinion of a Tripadvisor member and not of TripAdvisor LLC.
ddill0829
Harrington, Delaware
11
Reviewed 10 September 2016
A dump is a dump

We booked room for two days through travelocity was there long enough to find something else. Sign said high speed internet ,had no internet. Had a kitchenette problem was it didn't work. Trim on table held on by duck tape. Got there ac didn't work.no batteries in remote for TV turn on by hand to get six snowy channels.we spoke with local cops they say motel is for ''drug attics and homeless folks''. Wouldn't advise anyone to take interest in this DUMP.

This review is the subjective opinion of a Tripadvisor member and not of TripAdvisor LLC.
Durgesh G
Miami, Florida
3211
Reviewed 29 August 2016
Low budget overnight stay

We stayed here this weekend just to spend half night in Atlantic city (most of the time we were out in Casino) and I booked 2 rooms, 1 for 2 people and another for 3 people. When we checked in everything looked fine, both the rooms were good for the budget comparing rates with other hotels. The only thing is hotel owner is bit cranky, at the time of check in he asked for 10$ room key charge, later on we learned that it was just deposit.

The real mess started next morning when I asked him for additional bath towel (since one of our room had 3 people and there were only 2 bath towels in the room) and he denied to provide it mentioning about budget and cost. I had to explain him regarding my reservation of 3 people and additional cost we paid for 3rd person then finally he agreed to give one more bath towel.

This review is the subjective opinion of a Tripadvisor member and not of TripAdvisor LLC.
Ericka F
22
Reviewed 7 July 2016 via mobile
Discusting and dirty

We booked though Expedia and we got here and were appalled at how bad the look of the place was. Tried checking in and the office worker Told us to cancel because he couldn't find our name on the list. Happy we canceled and went across the street.

This review is the subjective opinion of a Tripadvisor member and not of TripAdvisor LLC.
rukkunudeen r
Chennai (Madras), India
35460
Reviewed 13 October 2015
never opt for this motel

This review is the subjective opinion of a Tripadvisor member and not of TripAdvisor LLC.
View more reviews
PreviousNext
123
<script type='text/javascript' crossorigin='anonymous' async onerror='__scriptLoadError(this,tru