US$80
View deal
Free cancellation until 27/06/21
Reserve now, pay at stay
Travelocity
Orbitz.com
eDreams
View all 14 deals
Prices are provided by our partners, and reflect nightly room rates, including all taxes and fees known to our partners. Please see our partners for more details.
Payments made by partners impact the order of prices displayed. Room types may vary.
Eric W
22

When we first arrived, we found the attendant passed out. After waking him up and going to our room, we found out we had roommates. Unfortunately bugs don't speak so we named them Fred and Larry, but at some point we accidentally stepped on and killed Fred, the roach. Later that night all his bug friends came to hold a memorial in his honor, which happened to be in our beds. After waking up covered in bug bites, it was time for a nice hot shower. The water pressure was equivalent to having one of the crack heads in the parking lot dribbleb spit on you. It was nice of the maid to give us a wake up call by banging on the window and staring at me in me towel. Since the coffee was nonexistent, if you need a pick me up, you could have gone outside and purchased some what I believe was to be crack from one of the permanent residents of the establishment.

I would rommend you stay anywhere else. If you must stay here bring a tyvek suit because the floors are sticky, the air is actually cigarette smoke, and there is poop on the wallsMore

Show less
Trip type: Travelled on business
See all 168 reviews
Payments made by partners impact the order of prices displayed. Room types may vary.
Nearby Hotels 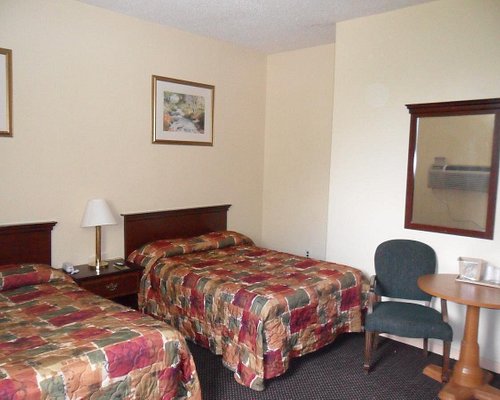 The people they have staying in this hotel long term are societies problems, i seen hookers (working) addicts crashed out on the sidewalk. the place was a garbage pit , there was not a clean place in the parking lot, runned down needed maintenance bad. the room was scarey , the door did not shut , i moved the dresser over to it so no one would enter, i am not exagerating , if anything i am leaving stuff out, it was horrible.

This review is the subjective opinion of a TripAdvisor member and not of TripAdvisor LLC
Maria A
54
Reviewed 21 December 2017
stay away...

I needed a basic room for a one night stay so I booked the motel 6. The first thing I noticed even before entering was the people hanging around. they were cursing and smoking marijuana. I went to my room and upon entering the smell of cigarette smoke took my breath away. the carpets were dirty and there was a big stain on the bedspread.the room was rundown and dingy. I learned that many people live there either due to poverty or drug use. I didnt stay and was so digusted I left without asking for a refund

Maria, Thank you for sharing your feedback. We are committed to delivering a clean, comfortable visit and apologize for any failure in following through on that commitment during your recent stay. We strive to provide a decent, pleasant stay and are disappointed your visit was unsatisfactory due to the odor concern you describe. Safety and security are high priorities within Motel 6 standards for quality, and we regret you felt differently during your visit. We encourage you to contact our Guest Relations department at 1-855-787-9864 to record the details of your stay to help us provide a better guest experience in the future.

Report response as inappropriateThank you. We appreciate your input.
This response is the subjective opinion of the management representative and not of TripAdvisor LLC
MPhelan89
Edmonton, Canada
11
Reviewed 26 October 2017
Worst hotel ever! Do not stay here!

The rooms were extremely dirty. The floors haven’t been cleaned in a long time, I wouldn’t even take my shoes off. The beds were dirty, I slept fully clothed on top of the sheets. Our room had cockroaches and other bugs in it. Lots of people living at the hotel, very loud and police showed up while we were there. Staff were yelling and swearing at their kids in the middle of the parking lot. Worst experience I’ve ever had. Stay away from this hotel!!

We booked three rooms for two nights. The first of our group had to move from their room due to an odor from an unknown source. The staff gladly gave them a new room however it the same foul odor. The second groups room was not very clean and they did not sleep due to pest infestation. Not sure what type of bugs they were but there were many crawling all over. Our room (third) was dirty but no bugs that we noticed. The police were onsite due to some sort of disturbance and one of the staff was yelling and cursing up a storm about some person running around and in her words “pcp’ed up”. The front desk was okay and gave us back our money for the second night which we were all thankful for. We found another higher end motel for $20 more per night. This place requires a lot of work to get up to even Motel 6 standards. Hopefully they turn it around or the place will close.

This review is the subjective opinion of a TripAdvisor member and not of TripAdvisor LLC
LizP829
Bellport, New York
12
Reviewed 31 May 2017 via mobile
Close this Motel

This was by far the worst experience we have ever encountered. The room was reserved as a handicapped room as my husband is a paraplegic and confined to wheel chair. I payed the required amount and was told it needed to be cash they then came up to our car and said it would be more money because it was a handicapped room. We got in the room and this had to be the dirtiest room they had. There was filth everywhere. There was blood splatter on the ceiling and walls, the bathroom had not been cleaned in a very long time as there was so much hair and dirt all over the tub toilet sink counter and floor. They left us an ice bucket that had roach eggs and the cups were not even in plastic . This is bug infested .The bed sheet had burn holes in them along with the blanket and mattress cover. The smoke alarm was covered with a piece of paper. The close rack was hanging off the wall. The back of the door was missing there check out time and emergency information. There was tissue stuffed in the peep hole because it was missing . If there was another motel available over this Memorial Day weekend we would have taken it but we could not find one and we were there for a wedding and had already committed in cash to this room that we were told we could not get back
I was told housekeeping was not there
I ended up going to the store purchasing cleaners mop scrub brush bucket ect to clean the room ourselves also purchased a blanket and pillows and pillows cases
We wouldn't bring our belongings in the room and would just take items out of suitcases from the car as they were needed
This is motel 6 should be shut down by the New Jersey department of health
Motel 6 rethink your relationship with the privately owned chain by far not a standard you want to be known as

Dear Liz, Thank you for taking the time to share your review. We strive to deliver a great guest experience, but it sounds as though we did not perform to our usual standards in this case. We have procedures in place related to our pest policy that should have prevented the inconveniences you describe. We are committed to delivering a clean, comfortable room and apologize for any failure in delivering on the commitment during your recent stay. Please accept our apologies that your group's visit was less than satisfactory. We encourage you to contact our Guest Relations department at 1-855-787-9864 to record the details of your visit to help us provide a better guest experience in the future.