US$116
View Deal
Free cancellation until 05/03/21
StayForLong
Expedia.com
Hotels.com
View all 9 deals
Prices are provided by our partners, and reflect nightly room rates, including all taxes and fees known to our partners. Please see our partners for more details.
Payments made by partners impact the order of prices displayed. Room types may vary.
743alastair
London, United Kingdom
81

We stayed for two nights and were very happy with the hotel. The room was clean and comfortable and when we needed help from the staff they were very helpful. There was a nice breakfast and the location is very central. Would use again if we ever returned to Leon.More

We hope serve you soon.

Report response as inappropriateThank you. We appreciate your input.
This response is the subjective opinion of the management representative and not of TripAdvisor LLC
See all 416 reviews
Payments made by partners impact the order of prices displayed. Room types may vary.
Nearby Hotels 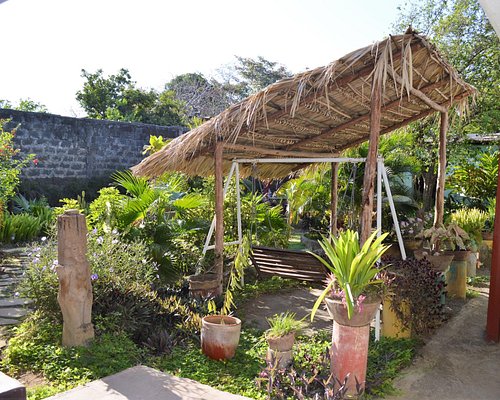 Harvest House Nicaragua
US$15
US$10
Booking.com
View Deal
Free cancellation
Hotels.com
US$15
Expedia.com
US$15
Travelocity
US$15
View all 8 deals from US$10
47 reviews
0.9 km from Hotel El Convento
We compared the lowest prices from 8 websites

Top Rated
Breakfast included
Hotel Flor de Sarta
US$63
Booking.com
View Deal
eDreams
US$63
Agoda.com
US$63
Tripadvisor
US$63
View all 13 deals from US$63
363 reviews
0.6 km from Hotel El Convento
We compared the lowest prices from 13 websites

Hotels.com
View Deal
Free cancellation
Reserve now, pay at stay
Expedia.com
US$53
Travelocity
US$53
CheapTickets
US$53
View all 10 deals from US$53
105 reviews
0.7 km from Hotel El Convento
We compared the lowest prices from 10 websites
Breakfast included
Hotel La Perla
US$99

As you can guess from the name Hotel El Convento was once a convent, although that word can mean what we would consider a monastery as well. The San Francisco Convent dates all the way back to 1639 and was run by the Franciscans until they were expelled from Nicaragua in 1829. After that it has served as a school, an institution of higher learning, a convent once again, but with sisters this time and lastly a school once again. Damaged by earthquakes and then bombed into oblivion during the civil war, by 1980 there was nothing left of the original historic structure.

Beginning in 1995, the site was purchased by the current owner who obtained as many plans as he could assemble to build a hotel that was as close in design to the original convent as possible. He has succeeded spectacularly. I had no idea until I got here that the place was essentially new.

The place is absolutely loaded with great pieces of art, most religious in nature, but not your run of the mill stiff depictions of saints and madonnas. For example there is a carved wooden angel with a Dolly Partonesque superstructure and children all waiting their turn. I've seen lots of angels, but never one that looked like this one.

Aside from looking at the art there is also a nice courtyard and fountain that was a favourite gathering spot for white-winged doves in the early morning and at evening.

The rooms were spacious with brick walls and tile floors that kept the rooms cool although there was also air conditioning if you wanted it, but we generally found the ambient temperature just right.

Not only was the hotel itself great, but the location was excellent. It seemed that almost everything you would want to see was only a few blocks away in one direction or another. This is simply a great oasis in a very nice city with very few tourists.

We appreciate the time you took to let us know your experience at our hotel, it is a pleasure to serve you.

Report response as inappropriateThank you. We appreciate your input.
This response is the subjective opinion of the management representative and not of TripAdvisor LLC
M4192IWjackieb
London, United Kingdom
5118
Reviewed 22 February 2020 via mobile
Lovely hotel

This hotel is situated a 5 minute walk from the main square and cathedral. It is a converted convent that used to belong to the church next door. A lot of the objects and rooms have been kept giving it a lovely atmosphere. The room was clean and tidy with 2 double beds, TV, WiFi and air conditioning. A separate pool towel was already in the closet for you to use. The pool is small but clean and refreshing. Breakfast was buffet style. Only on my 3rd morning was I offered an omelette but there was bacon, sausage, scrambled eggs, plantin and halumi cheese on offer with bread/toast, yoghurts and fruit. The courtyard has designed bushes and a large fountain that the birds used to cool off in! Peaceful to sit and read or just watch the birds. Would recommend.

This review is the subjective opinion of a TripAdvisor member and not of TripAdvisor LLC
Chris W
Penarth, United Kingdom
24081
Reviewed 2 February 2020
Just about okay

We only stayed here for one night and the room was full of mosquitos, so bad that we had to go to a supermarket to buy a can of fly spray.
The hotel is an old convent and there is iconography everywhere, which is different.
The breakfast was okay but not outstanding.
There is a small pool which is refreshing after a hot and sweaty day travelling around the area.

This review is the subjective opinion of a TripAdvisor member and not of TripAdvisor LLC
Allan J
Washington DC, District of Columbia
4
Reviewed 8 October 2019
One of the best hotels in Leon. Beautiful Grounds

This is one of the best hotels in Leon. It is a refurbished old convent with beautiful grounds. Wlaking distance to the cathedral, restaurants, and shopping. When checking in, ask for a room that is not next to the street. From our room we could hear the evening and early morning rush hour traffic.

Thank you per the time that you took to let us know your experience with us.

We hope can serve you soon.

Report response as inappropriateThank you. We appreciate your input.
This response is the subjective opinion of the management representative and not of TripAdvisor LLC
julianfelix
Zurich, Switzerland
204
Reviewed 22 August 2019
Beautiful colonial hide away in Leon

The place is a beautiful hide away in busy Leon. The big "garden" is a source of calmness in a hectic city. you can really feel like a monk, The rooms are rather simple, nothing special, but the place is somehow magic anyway. A small pool to cool down is there as well. Great place to stay in style in Leon.

Dear Mr.
Thank you per the time that you took to let us know your experience with us.
We hope serve you soon.
Best Regards,

Report response as inappropriateThank you. We appreciate your input.
This response is the subjective opinion of the management representative and not of TripAdvisor LLC
View more reviews
PreviousNext
12…70