Lake Chatuge Lodge
Lowest prices for your stay
Lock in the lowest price from these sites
US$133
US$110
View deal
PricelineUS$110
Hotels.comUS$110
eDreamsUS$110
Agoda.comUS$110
Trip.comUS$133
TravelocityUS$110
View all 15 deals
Prices are provided by our partners, and reflect nightly room rates, including all taxes and fees known to our partners. Please see our partners for more details.
Payments made by partners impact the order of prices displayed. Room types may vary.
Lauren J
Dallas, Georgia
5416

First off the staff is extremely nice. They let me check in early which was wonderful. It's in a great location with a big sign (hard to miss). The views of the mountains are wonderful. within walking Distance of the fair grounds and a good bbq restaurant. It appears to be know a renovation of some kind you can see some areas where they Painted and stopped, some dents from doors in the walls, and some grout problems. But it is still a very nice hotel and it nice that there trying to keep the interior up to date. They are serving a decent breakfast even with covid everything is individually wrapped but there still are hot sandwiches and such. The staff is so very accommodating.More

Show less
Trip type: Travelled with family
See all 381 reviews
Payments made by partners impact the order of prices displayed. Room types may vary.
Nearby Hotels 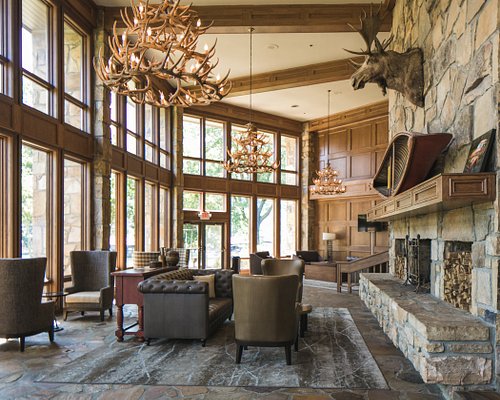 The Ridges Resort on Lake Chatuge
US$147
Booking.com
View deal
Free cancellation
Agoda.com
US$147
Hotels.com
US$147
Expedia.com
US$147
View all 16 deals from US$147
795 reviews
4.4 km from Lake Chatuge Lodge
We compared the lowest prices from 16 websites

I was a little hesitant when I booked this hotel for 2 nights (September 2-4) due to some negative reviews which I believe are unfounded. This hotel has a special character that the chain hotels down the road cannot beat. During this COVID 19 pandemic, we found all employees wearing masks and doing their best to keep the public areas and hotel rooms very clean. The staff at the front desk were very friendly and did everything to please guests. We requested a refrigerator in our room and it was quickly provided upon request. Request a room looking towards the back of the property overlooking the lake and you wont be sorry! There is a wonderful view of the lake from the back patio where there are also rocking chairs and tables. The hotel's 2nd floor also has a public area with comfortable couches and chairs with a tremendous view of the lake. The rooms are larger than most chain hotel rooms with an extra large bathroom and we had a king bed and there was more than ample room to spead your luggage and enough closet space. We also had a nice balcony with 2 chairs and a small table for sitting and enjoying the lake views. The property is spread out over 3-4 acres with nice landscaping and sitting areas. An extra plus was the bar-b-que resturant next door which we walked to and enjoyed the half price Wednesday night ribs. Especially enjoyable is the lake across the street that takes 1 minute to drive to and has a bueatiful sandy beach with picnic shelters and restrooms/showers. The beach and its facilities are free to the public and nicely maintained

Room tip: Get the rooms on the rear of the building with lake views
Ask daviduria2016 about Lake Chatuge Lodge
2  Thank daviduria2016

This lodge provided the feel of the mountains with friendly staff and beautiful lakeside view from our balcony. Nearby hiking trail filled with Azaleas and path by the lake. Lake offer boat rentals and the lodge is close to a variety of restaurants.

This review is the subjective opinion of a TripAdvisor member and not of TripAdvisor LLC
shawnlakeland
Lakeland, Florida
4922
Reviewed 9 July 2020
The people are nice, it was clean and the view was ok.

So I was tired and did not pay as much attention to the room upon first glance as I should have. It thought this would be a quaint little hotel, with a nice lake view and such. The reviewes were overall good so why not. Well like I said, the people were really nice and it was clean with a decent view. The room was dated with paint falling from the ceiling in the bathroom, the wallpaper was splitting away, the title had cracks, the toilet rocked when you sat on it, the ceiling in the room was coming down in one spot and the worst of all was the bed. Not sure how old this thing was, but it was old. Think pillow stuffing tossed on top of plywood laying on something springy bad. I woke up every hour on the hour and was so tired I could not even do anything about it. As I became more aware I became more critical to things where it appears that managment just does not care. Cheap things to fix like scratched doors that just needed to be painted, wallks in the hall that probably could have been cleaned, stuff like that. At least it was clean and the staff was kind.

This review is the subjective opinion of a TripAdvisor member and not of TripAdvisor LLC
RobSC1001
Gaffney, South Carolina
20526
Reviewed 6 July 2020 via mobile
Awesome Hotel Joint

This is an awesome hotel joint. The joint was clean and friendly staff. The front lobby was like a lodge setting and stuff. The back deck was great with a view of the lake.
The room were super nice. The beds were comfortable and the bathrooms were large.
The breakfast was great. The natives were nice in town. I didn’t see any zombies or tweakers walking around.
I put some views of the lake

Groovy Review Alert!!! Stellar Comments!!! This review has made me and the rest of the staff smile. Thank you for your great use of words and I hope that you will be back soon to enjoy another Awesome stay at Lake Chatuge Lodge.

Report response as inappropriateThank you. We appreciate your input.
This response is the subjective opinion of the management representative and not of TripAdvisor LLC
A5500YPjeffs
5
Reviewed 6 July 2020 via mobile
Good Choice For. Get Away.

This place is located on a hill overlooking the lake. The rooms are spacious and have a patio or balcony. The breakfast was forgettable. Due to Covid-19 there was no coffee which I still don’t understand. This Covid-19 experience is already weird enough. Why make it weirder? But, it wasn’t a deal breaker. McDonalds is right down the road and they have decent coffee.

Most of the staff that I dealt with were friendly and helpful. There was this one that wasn’t but isn’t there always at least one?

The parking lot is down a flight of stairs from the front entrance so keep that in mind if you think that wi be an issue.

All in all I think it’s a good choice. I didn’t give it five stars because there was no coffee and my unpleasant experience with the one employee.

Thank you for your kind words. I know that during these crazy times we all have to adapt to the changes. According to our Georgia Executive Order, hotels aren't allowed to have open containers in public spaces. This applies to us putting coffee in our lobby. I apologize if this detracted from your overall stay. Our front desk does try to let every guest know at check in that there is a coffee maker in their room because there isn't coffee in the lobby. There are milk and a selection of juices provided during breakfast. I apologize that you had an issue with one of our staff. Please contact me if you would like to further discuss your incident. I'm glad that this didn't affect the rest of your stay and I hope that you will be back soon.

Report response as inappropriateThank you. We appreciate your input.
This response is the subjective opinion of the management representative and not of TripAdvisor LLC
View more reviews
PreviousNext
123…64