Econo Lodge
Lowest prices for your stay
US$112
View deal

US$130
US$110
View deal
SAVE US$20
Expedia.comUS$112
Hotels.comUS$112
ZenHotels.comUS$130
View all 15 deals
Prices are provided by our partners, and reflect nightly room rates, including all taxes and fees known to our partners. Please see our partners for more details.
Payments made by partners impact the order of prices displayed. Room types may vary.
G504USjuliec
Ocala, Florida
5655

Roaches, cracked bathtub,you have to have brutt strength to pull the old fashioned tab to start the shower, heat lamp in bathroom doesn't work, creaking beds that are hard as sleeping on the ground. 3 nights stay and not once did someone clean in our room.

Trip type: Travelled with family
See all 227 reviews
Payments made by partners impact the order of prices displayed. Room types may vary.
Nearby Hotels

Breakfast included
Country Inn & Suites by Radisson, Helen, GA
US$141
Booking.com
View deal
Free cancellation
Reserve now, pay at stay
Expedia.com
US$138
Lol.travel
US$129
StayForLong
US$152
View all 17 deals from US$129
1,072 reviews
1.1 km from Econo Lodge
We compared the lowest prices from 17 websites 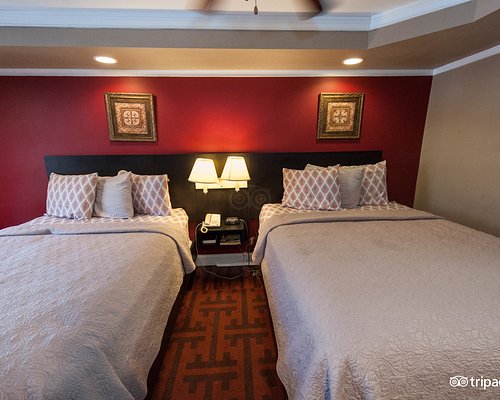 Taking safety measures
We compared the lowest prices from 19 websites
Breakfast included
Hampton Inn Helen
US$176
US$154
Booking.com
View deal
Free cancellation
Reserve now, pay at stay
Hampton.com
US$154
Priceline
US$154
StayForLong
US$176
View all 18 deals from US$154
1,279 reviews
1.9 km from Econo Lodge

Taking safety measures
We compared the lowest prices from 18 websites
Breakfast included
Red Roof Inn Helen
US$124
US$103
Booking.com
View deal
Free cancellation
Expedia.com
US$103
Priceline
US$103
StayForLong
US$124
View all 17 deals from US$102
144 reviews
0.9 km from Econo Lodge

Luckily we got to the hotel late after exploring Helen (which is adorable). Before we took anything out of the car I went in to turn the beds down because I had two sleep babies. As soon as I turned the bed down I noticed a dirty pillowcase so I turned the pillow over to find a BED BUG crawling on the pillow. I immediately went over to the other bed to check (out of curiosity) and sure enough there were two bed bugs crawling in that bed. We didn’t even get the stuff out of the car. My husband went to the front to let them know we wouldn’t be staying there and wanted a refund. They gave us a refund and we drove to a Hilton to stay.

This review is the subjective opinion of a TripAdvisor member and not of TripAdvisor LLC
139ScottM
Westlake, Louisiana
25598
Reviewed 15 November 2020 via mobile
Understaffed yet very busy

Had to wait 2 extra hours to check in due to rooms needing to be cleaned. We ended up with a different room than we had reserved (no hot tub). The “breakfast” consisted of coffee available at the reception and pre packaged muffins, pure false advertising in my opinion. This place was the lowlight of a 10 night driving trip, lost time in Helen for which we had only one evening. Would not recommend this place.

This review is the subjective opinion of a TripAdvisor member and not of TripAdvisor LLC
BHKH5956
East Ridge, Tennessee
21
Reviewed 23 October 2020 via mobile
Vacation stay

Very disappointing, the room and service was the worst ever. When we arrived to our room, no shower curtain, no TV because cable company went bankrupt what we was told before we arrived . The room wasn’t cleaned during the day when we went out. Only got two towels and wash rags. Was told to bring old towels to get more towels. No access to pool because it was drained and no continental breakfast was offered. Was very noisy and finally we were checked out of our room because someone checked out and gave the wrong room number and we had to go down and tell the front desk we had another night. Very bad hotel never again we we ever stay at this dump of a hotel.My recommendation don’t stay at this Econo Lodge in Helen Ga don’t waste your money.

This review is the subjective opinion of a TripAdvisor member and not of TripAdvisor LLC
anonymous35761x
21
Reviewed 10 August 2020
Nice rooms, but the service is horrible

We arrived 30 minutes after check in and were told it would be 30 minutes before the room was ready. We came back 30 minutes later and were told it would be a few more minutes. We waited another hour! No explanation, no apology. Nothing. They could've at least been honest about how long it'd be so we could do something else and make accommodations for our food that was spoiling in the cooler. The manager looked like she would laugh at my boyfriend when he requested a discount to comp for our room not being ready until two full hours after check in, but ultimately gave us 10% off. She eventually told us that the wait was because there was only one maid. There were three women at the front desk. We really did not appreciate that she tried to blame it on the maid instead of helping her while someone else watched the desk or asking one of the other girls to help. We watched another group demand a full refund and stay somewhere else because they were still not in their room at 5 pm either. In addition to the staff's unprofessional manner, they were also unprofessionally dressed. The room was clean and really nice once we finally got to check in.

I booked two rooms five weeks in advance with reward points for two nights here. I was called at 5PM the day of check in by the "manager" telling me they canceled my reservation because they were overbooked. I am a Diamond level member, spending thousands each year on Choice Hotels, and in doing so, expect certain treatment. I know this is an Econo Lodge and not the Ritz, but canceling on me after check in time the day of is wrong when traveling from 6 hours away.
Helen is extremely busy during the summer, so finding another place was going to be impossible. I told the manager she would have to help provide me another place to stay. She called me back and said she found me two rooms in a town 30 minutes away. I had little choice. Arriving at new hotel, the clerk told me the cost to check in. I stated this should be covered by the Econo Lodge since they messed up my reservation. The Econo manager said she couldn't do that, so off we went again in place of somewhere to stay. We found 2 rooms at a hotel in town for a total of $600.
We did stay at the Econo Lodge the next night because I didn't have another $600 to blow from our vacation budget. We were told we could check in early (by lunch). What a dump!!! We didn't get in until after 5:00. One room was covered in pet hair, there were no towels, the linens were stained, the rooms were musty.
I still, 3 weeks later, have not been able to recoup any money, any reward points, or get anyone from Choice Gotels to return my calls. They have lost a customer for life.