Hampton Inn & Suites Wellington
Lowest prices for your stay
Lock in the lowest price from these sites
US$241
US$225
Free cancellation until 08/08/21
View deal
Hampton.comUS$225
Expedia.comUS$225
PricelineUS$225
Hotels.comUS$225
eDreamsUS$225
TraveluroUS$241
View all 20 deals
Prices are provided by our partners, and reflect nightly room rates, including all taxes and fees known to our partners. Please see our partners for more details.
Payments made by partners impact the order of prices displayed. Room types may vary.
John N
61

We hadn’t seen our grandkids in over a year. Naturally we were nervous traveling but I couldn’t be more pleased with how safe the Hampton Inn made us feel. The entire staff were respectful of our safety and delivered an outstanding experience. I would return in a heartbeat.

Review collected in partnership with Hampton
This business uses tools provided by Tripadvisor (or one of its official Review Collection Partners) to encourage and collect guest reviews, including this one.
See all 493 reviews
Payments made by partners impact the order of prices displayed. Room types may vary.
Nearby Hotels 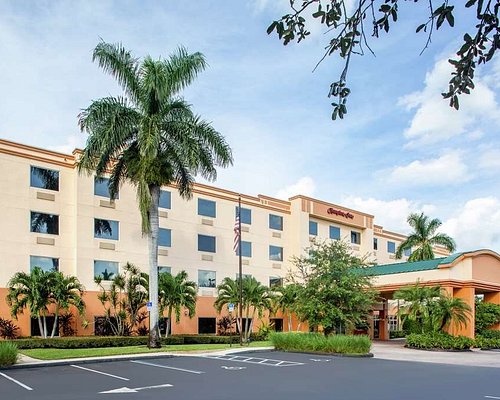 Hamptons are largely the same experience. Nice beds. Big rooms. Breakfast that's free and you get what you pay for.
But a recurring problem are cheap and sometimes broken room HVAC systems.
In this case, the thermostat looked to be as cheap as one could find and it didn't work. When the set was 75 and the room temperature was 71 and it was set to HEAT - nothing happened. When I informed management, I was told to set it to 80, instead of saying "yes, there's a problem and here's how to deal with it". Or, better yet "we're replacing the thermostats in all the hotel rooms over the next 3 months."
But basically saying "deal with it" wasn't acceptable.

This review is the subjective opinion of a TripAdvisor member and not of TripAdvisor LLC
584patrickq
New York City, New York
23
Reviewed 4 April 2021
An Incredible Hotel-Thank You Robert Colletti

I was going to stay for 2 weeks and ended up staying over a month. Robert Colletti is one of the best hotel managers I've ever worked with. He is so accomodating and professional and made my stay the best it could be. The staff and service are excellent as well. The hotel is immaculate and the pool lovely. I didn't want to leave!

This review is the subjective opinion of a TripAdvisor member and not of TripAdvisor LLC
alinanrobertson94
Orlando, Florida
1
Reviewed 30 March 2021
Quick stay and worth it

We loved how comfortable the bed was and it was beautiful when you walked in! Definitely not your average Hampton Inn! Thank you so much for the comfortable stay! Also- didn’t get to check out the pool but from the inside it looked beautiful as well!

Review collected in partnership with Hampton
This business uses tools provided by Tripadvisor (or one of its official Review Collection Partners) to encourage and collect guest reviews, including this one.
Ask alinanrobertson94 about Hampton Inn & Suites Wellington
Thank alinanrobertson94

This review is the subjective opinion of a TripAdvisor member and not of TripAdvisor LLC
erickaborges
1
Reviewed 23 March 2021
horse show adventure!

Loved the equestrian decor and the location was great and handy for the show and shopping and restaurants. Will definitely be our go to hotel when traveling to the area for future horse shows. Loved it

Review collected in partnership with Hampton
This business uses tools provided by Tripadvisor (or one of its official Review Collection Partners) to encourage and collect guest reviews, including this one.
Ask erickaborges about Hampton Inn & Suites Wellington
Thank erickaborges

This review is the subjective opinion of a TripAdvisor member and not of TripAdvisor LLC
carollM3568YW
Philadelphia, Pennsylvania
537
Reviewed 22 January 2021 via mobile
Clean and welcoming

I’ve never taken photos of the inside of a hotel but the floors were so highly polished, I couldn’t resist. They took all required precautions but were also very helpful, friendly and welcoming. I felt very comfortable.

Breakfast was very good with coffee that was reasonably strong. They had a large variety including fresh fruit, greek yogurt, hot/cold cereal and big fluffy waffles.

The pool was also clean and it was nicely done.

I’ve had good luck with Hamptons and this one did not disappoint.