US$173
US$143
View deal
PricelineUS$168
Hotels.comUS$168
TraveluroUS$173
View all 17 deals
Prices are provided by our partners, and reflect nightly room rates, including all taxes and fees known to our partners. Please see our partners for more details.
Payments made by partners impact the order of prices displayed. Room types may vary.
LLWTravels
Grand Cayman
8066

My first flight was moved earlier than my connecting flight and because of the pandemic I wanted to lessen my travel within the US. The staffs are friendly and helpful. The room is quite standard and basic, which is normally fine for an overnight. More


Thanks for posting your valuable feedback. It was our pleasure to welcome you to our hotel and accommodate your lodging needs in our safe and convenient location. We appreciate the kind comments regarding our hospitality team. We are grateful for your business and look forward to your next stay at Miami International Airport Hotel.

Report response as inappropriateThank you. We appreciate your input.
This response is the subjective opinion of the management representative and not of TripAdvisor LLC
See all 3,515 reviews
Payments made by partners impact the order of prices displayed. Room types may vary.
Nearby Hotels 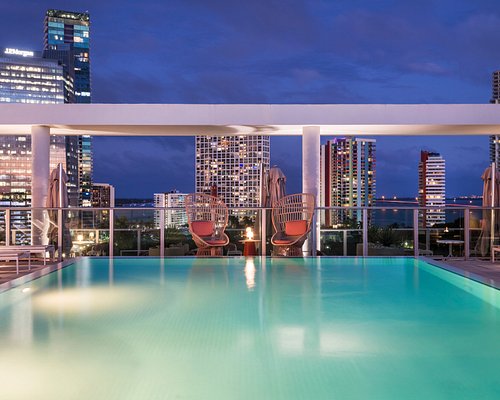 Sponsored
Novotel Miami Brickell
US$225
Booking.com
View deal
Free cancellation
Expedia.com
US$225
ZenHotels.com
US$212
Novotel
US$225
View all 19 deals from US$212
2,693 reviews

Taking safety measures
We compared the lowest prices from 19 websites
Hyatt Regency Miami
US$253
US$216
Booking.com
View deal
Free cancellation
Reserve now, pay at stay
Expedia.com
US$216
Tripadvisor
US$216
Traveluro
US$253
View all 23 deals from US$215
886 reviews
9.3 km from Miami International Airport Hotel

Taking safety measures
We compared the lowest prices from 20 websites
Hilton Miami Downtown
US$201
Booking.com
View deal
Expedia.com
US$201
Hurb
US$181
Priceline
US$201
View all 18 deals from US$181
4,737 reviews
9.0 km from Miami International Airport Hotel

Hector is the most wonderful customer service agent it was truly a great experience the room wasn't that good but the service was great friendly and very helpful. Hector had great reference,Manny and Gardenia were very attented to detail.

Thank you for the generous review commending our team. We are delighted to read what a positive impact our front desk made on your recent stay. We will make sure to share these compliments with Hector and Gardenia and the rest of the staff. Our team thrives to provide a wonderful service to each of our valued guests. We enjoyed hosting you and look forward to seeing you again soon.

Report response as inappropriateThank you. We appreciate your input.
This response is the subjective opinion of the management representative and not of TripAdvisor LLC
sania_oliveira
11
Reviewed 9 January 2021 via mobile
Customers pay 61 dollars more booking directly in Hotel site

My husband booked a Queen Standard Bedroom one month ago and The total price was $231.00 I thought it was absurd to pay this amount, but he convinced me when he showed me the photo of the room. Arriving here, I went to check the daily price on Tripadvisor and to my surprise, the value was $ 143.00 with no booking fee. to top it off, the room they gave us smelled bad, it was super tight and it was possible to see the corridor looking through the cracks in the door. In short, terrible hotel with absurd price !!

I’m glad that we were able to clarify that your husband had made the reservation on getaroom.com
and did not book directly with us to choose the best available rate.
We are pleased to know that you were able to understand the situation. As explained in our previous
communication that we aim to provide our guest with a comfortable stay, total satisfaction at a
reasonable price.
Our team stands behind our hospitality promise to make sure our guests are fully satisfied before
leaving the hotel.
The team at MIA Hotel felt disheartened to see that we did not have the opportunity
to address your concerns while you were staying with us. Feedback is a great tool to helps us improve
our guest experience and take corrective action immediately.
That is why our dedicated staff at our front desk and manager on duty follows up with every guest from
the time of arrival to a safe and warm farewell at check out.
We deeply regret that you did not give us the opportunity to address your concerns earlier before
posting by mistake that you had booked directly in our hotel site.
My team and I would have made sure your stay was beyond expectations. In a positive note we have
been in communication with you addressing your concerns. I understand how you feel knowing that
the extra payment was for the third party vendor. I’m waiting for your reply from the last
correspondence sent regarding your satisfaction with our assistance.
Hope to hear from you soon and welcome you back.

Report response as inappropriateThank you. We appreciate your input.
This response is the subjective opinion of the management representative and not of TripAdvisor LLC
Gary R
McKinney, Texas
38
Reviewed 1 January 2021
Hector was amazing and sincere

My family traveled from Dallas to Fort Lauderdale, paid 100 dollar cab fare to get to Miami airport to try and make a flight to Santiago Chile to see family for the holidays. Unfortunately we werent allowed to board because our kids Covid tests were still pending. So not having a choice but to wait for the next flight the following night so we booked a room at the Miami International Airport hotel. The room was ok, nothing crazy nice or anything but super convenient inside the airport so no need to cab or shuttle anywherd. However the real diamond to this hotel and experience was Hector was who helped us at checkin. Hector 9is one of the nicest, most sincere and helpful people ive ever encountered at a hotel. Understanding our situation he extended our room checkout to 6pm so we didnt have to roam the airport all day with 4 bags and two kids waiting for a 9pm flight. He also took time to show me how to install and setup uber eats so i could order food for my family since all of the airport restaurants were closed between covid curfews and the fact it was new years eve. Cant say enough nice things about Hector and wish more people who were the face of a business were like him.


Thank you for your kind review. We are very pleased to hear that one of our team members at the front desk made such a great impact on your stay at Miami International Airport Hotel. I will be sure to let Hector know that his caring and dedication has made your stay a memorable one. It’s definitely an uplifting experience every time we hear such positive reviews that mention our staff. This feedback will also have a positive impact for the rest of our team members, that deliver outstanding service that makes our guest feel that our hotel is their home away from home. Hope you were able to enjoy a pleasant flight and happy holidays with your family.

Report response as inappropriateThank you. We appreciate your input.
This response is the subjective opinion of the management representative and not of TripAdvisor LLC
CaseVoyager
11
Reviewed 19 December 2020
Professional and Empathetic Staff!

I missed my flight and had to stay overnight. My room was well laid out, clean and functional. The staff, particularly Mairene, was very helpful; from advising on where to find services I needed to help with travel doc prep. Overall, they saved my 24hrs in Miami.

Case Voyager much thanks and appreciation for recognizing Mairene as an outstanding MIAHOTEL associate superstar. And for the overall favorable review our visitors can expect to receive when visiting MIAMI World's gateway city to Latin America. We will hope to see you again and please stop by for a hello. I will personally commend Mairene for your posting.She is a model example of our Hospitality promise.
"YES I CAN-WHATEVER IT TAKES.

Report response as inappropriateThank you. We appreciate your input.
This response is the subjective opinion of the management representative and not of TripAdvisor LLC
Leonore A
24
Reviewed 13 December 2020
Attentive Hotel Manager saves the night and then some.....

I recommend staying in the Miami Airport Hotel. Not because its super chic. But because the top manager is Super Attentive: He had overheard at the front desk that I needed to print out my QR code with my name next to it. The screenshot on my phone showed it with my health insurance # but without my name. I was unable to resolve this during my 9 hour layover for lack of access to a printer, and was not permitted to board my flight to Costa Rica. ~ I had inquired: The entire MIAMI Terminal has no basic SOS center, where a human in need can get help, be it for a physical, technological or psychological break down. Being stranded overnight, I went once more to the concierge of the Miami Airport Hotel, to check in for better or worse. They have five affordably priced rooms with twin bed $ 89 tax included. But better. A knight in shining armor approached me, the Elder aged 73. “Has your issue been resolved?” he asked. It had not, wherefore he got his laptop and printed out from my email the document with my name on it. ~ I checked in, I took hot shower, slept through the night in a quiet room on a VERY comfortable mattress. Friendly staff welcomes guest in an unaffiliated restaurant very nearby. It's obvious that the manager of the Miami Airport Hotel loves his job. His superiors have hired a kind observant man, who is committed to make this hotel the optimal place to stay, that includes a small tech center.


Thanks for sharing this amazing and uplifting review. We’re thrilled to hear about your wonderful experience in our hotel. We are definitely fortunate to have guests like yourself, that our willing to share their heartwarming experience with other travelers. Our team is guided by a hospitality leader, that inspires our entire staff to provide our guests with an outstanding service and make it right at each opportunity. Hope you were able to enjoy your flight. It’s truly our pleasure to host your next stay at our hotel.

Report response as inappropriateThank you. We appreciate your input.
This response is the subjective opinion of the management representative and not of TripAdvisor LLC
View more reviews
PreviousNext
1…8910…