Hyatt Regency Miami
8 people are viewing this hotel
Lock in the lowest price from these sites
US$255
US$225
Free cancellation until 02/05/21
View deal
Expedia.comUS$225
PricelineUS$225
Hotels.comUS$225
Hyatt.comUS$225
Agoda.comUS$225
FindHotelUS$255
View all 21 deals
Prices are provided by our partners, and reflect nightly room rates, including all taxes and fees known to our partners. Please see our partners for more details.
Payments made by partners impact the order of prices displayed. Room types may vary.
K2168VBjons
Riverview, Florida
810

Booked this last minute on 2/20 evening FOR 2/20. Little pricey for a last minute booking but most places were more expensive or simply no vacancy. I wasn't disappointed! Somehow we ended up on floor 21 of the total 24 floors. The view was spectacular facing the city and the room was very clean, updated bathroom, great water pressure and very comfy bed. Will definitely look to stay here again next time I'm in MiamiMore

Dear K2168VBjons,
Thank you for selecting Hyatt Regency during your recent visit to Miami. We are happy you found our hotel a great place to stay while enjoying our exciting City. We hope the next time you find yourself heading back to this area that you make this your home.

Report response as inappropriateThank you. We appreciate your input.
This response is the subjective opinion of the management representative and not of TripAdvisor LLC
See all 806 reviews
Payments made by partners impact the order of prices displayed. Room types may vary.
Nearby Hotels 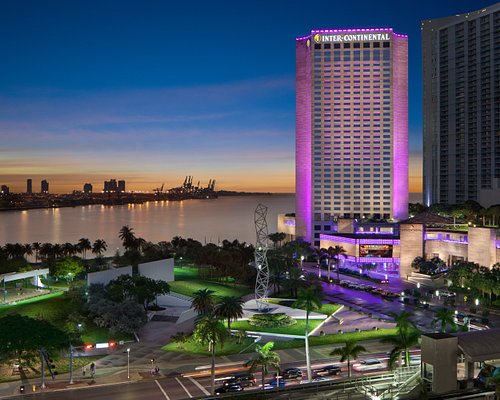 Expedia.com
View deal
Free cancellation
Pay up to 12X
Booking.com
US$134
Agoda.com
US$81
Official Hotel
US$111
View all 18 deals from US$81
2,545 reviews
7.6 km from Hyatt Regency Miami
We compared the lowest prices from 18 websites

Taking safety measures
We compared the lowest prices from 20 websites
Four Points by Sheraton Miami Airport
US$141
US$136
Booking.com
View deal
FourPoints.com
US$136
Priceline
US$136
StayForLong
US$141
View all 17 deals from US$135
248 reviews
13.5 km from Hyatt Regency Miami

Hotel was close to the venue I had to go to for a wedding and also close enough drive to south beach for dinners but far enough to enjoy quite neighborhood. Great area for walking and plenty of restaurants in the area!

Review collected in partnership with Hyatt Hotels
This business uses tools provided by Tripadvisor (or one of its official Review Collection Partners) to encourage and collect guest reviews, including this one.
Ask westbankaudio1 about Hyatt Regency Miami
1  Thank westbankaudio1

Dear westbankaudio1,
Thank you for selecting Hyatt Regency during your recent stay in Downtown Miami. We are centrally located to many attractions and including a great selection of many restaurants to fit every taste and budget.
We hope the next time you are in Miami you will make this your place to stay.
Sincerely,
Amir Blattner, General Manager

Report response as inappropriateThank you. We appreciate your input.
This response is the subjective opinion of the management representative and not of TripAdvisor LLC
DanS_2728
Saint Louis, Missouri
2123
Reviewed 21 February 2021
Lots of ups and downs

This hotel is great physically and from a location standpoint. It's clean and pleasing aesthetically, and the staff is friendly, however the housekeeping team and food service team left much to be desired.

We requested daily housekeeping, and while they showed up every day, their performance was substandard. They did not restock several bottles of amenities, only gave us fresh towels twice in two days, and even though we requested they only stock us with regular coffee and not decaf, they continually stocked our room with nothing but decaf. It felt like they were playing a joke on us.

The Riverview Marketplace was VERY understaffed, undertrained, and just generally slow. Long lines built up not so much because the staff was busy, but mores because it appeared they didn't know what they were doing. I received incorrect food and/or bills at least twice from them and had to walk them thru my order multiple times. The most complex thing I ordered was two black coffees, a plain bagel and a yogurt parfait.

Lastly, my final gripe was their internet. I'm a WOH Discoverist Member which means I'm supposed to have access to premium internet as a benefit of that tier status. There was only one option for internet at this hotel and it wasn't great. Got kicked off multiple times and it and the room's Chromecast just flat out gave up our last two days we were there. The front desk said they'd send someone up from engineering to help, but after several hours of waiting and using my phone as a hotspot, I gave up and went to bed.

Other than that, the location, the cleanliness, the facilities and the front desk were fantastic. I voiced a few of my complaints to them and they tried to help out, but the execution from the support staff just really wasn't there. I'd still probably stay here again, but I'd look for deals elsewhere before I do.

Review collected in partnership with Hyatt Hotels
This business uses tools provided by Tripadvisor (or one of its official Review Collection Partners) to encourage and collect guest reviews, including this one.
Ask DanS_2728 about Hyatt Regency Miami
1  Thank DanS_2728

Dear DanS_2728.
Thank you for staying with us during your recent trip to Miami. We appreciate the feedback so we may improve our customer experience in the areas mentioned.
Thank you for the feedback on our cleanliness as well and positive interaction with our Front Desk Team. We always strive to improve and it is your feedback that will help us target areas to be better in.

We do hope the next time you find your self headed to Miami you will stay with us again.

Report response as inappropriateThank you. We appreciate your input.
This response is the subjective opinion of the management representative and not of TripAdvisor LLC
Fab A
Miami Beach, Florida
6036
Reviewed 21 February 2021
Outdated rooms and overpriced

I have to say that I was able to get a last minute reservation here while all of Miami is packed right now, so that’s a good thing since our prior reservation was canceled in another hotel and it was almost midnight.
That being said, my husband paid over $300 for a standard room. Balcony doors are sealed, toilet water is constantly running and the room is dim and small. It’s in need of update, dark lights, old ceilings, ....this is more of a $120 a night but due to the location and time of year, their prices double. Not sure about staff since it was midnight when we arrived and went straight to the room.
It is clean, that’s all I can say.

Room tip: If you like Brickell it might be convenient
Ask Fab A about Hyatt Regency Miami
2  Thank Fab A

Dear Fab A,
Thank you for staying with us during your time in Downtown Miami. We are happy your experience with the cleanliness met with your needs.
We appreciate the feedback on our sleeping room and will use your feedback to improve our product.

Report response as inappropriateThank you. We appreciate your input.
This response is the subjective opinion of the management representative and not of TripAdvisor LLC
frank3355
Virginia Beach, Virginia
224249
Reviewed 19 February 2021
I was warned to not stay here, but I stupidly ignored the advice

This was absolutely the worst Hyatt stay I've had years, and I've stayed at a lot of Hyatts. Although the the staff was great, the location was ideal, and the lobby and public areas were fine, our room was a disaster. The bed was horribly uncomfortable. The pillows were similar to a bag of concrete mix. They honestly weighed at least 5 pounds each. The entire room style and decor looks like it hasn't been updated since the 90's. The clock still has an old style iPhone 13 pin dock to play music (the last iPhone that would fit this was the iPhone 4 which came out over a decade ago). The room had a balcony, but it was screwed and caulked shut. What is the point of the balcony? The bathtub didn't drain so that during every shower the water got 3 inches deep. We could here every noise and word spoken in the connecting room as if there were no door between us at all. And luckily for us they brought their own boom box so that we could enjoy their disturbingly awful music along with them, until 1am. Our entire bed shook as if an earthquake was happening every time the couple in the adjacent room had sex. And of course we could hear it all clearly too.

I had been advised to not stay at this hotel, but I got a good price and so ignored that advice. But I wouldn't stay here again if the room was free. It was the most uncomfortable, out of date, worn out, Hyatt room I think I've ever stayed in. I can't believe that Hyatt corporate allows this property to keep the Hyatt name.

Dear frank3355.
Thank you for staying with us during your recent trip to Miami. We appreciate all of your feedback so we may continue to improve our property and customer service. It is disappointing to hear your stay was not the experience you have come to expect when staying at a Hyatt Hotel.

If you would like to contact me directly to discuss further I would definitely appreciate the opportunity. You may reach me at amir.blattner@hyatt.com

Report response as inappropriateThank you. We appreciate your input.
This response is the subjective opinion of the management representative and not of TripAdvisor LLC
tricewill2
Houston, Texas
11
Reviewed 17 February 2021
Welcome back

This was a great step in moving forward in opening back up! The Coast Guard was there as well. It was definitely a clean and secure environment. I enjoyed my stay. Running from the snow in Texas to the Sunny beaches of Florida was an extremely awesome experience.

Review collected in partnership with Hyatt Hotels
This business uses tools provided by Tripadvisor (or one of its official Review Collection Partners) to encourage and collect guest reviews, including this one.
Ask tricewill2 about Hyatt Regency Miami
1  Thank tricewill2

Dear tricewill2,
We are glad you came to our warm, and sunny city. We appreciate the feedback on the safety measures Hyatt has implemented to keep our guests and associates healthy and safe.
We hope you will join us again the next time you find yourself headed to Miami.

Report response as inappropriateThank you. We appreciate your input.
This response is the subjective opinion of the management representative and not of TripAdvisor LLC
View more reviews
PreviousNext
1…789…135