US$241
US$155
View deal
SAVE US$86
Expedia.comUS$198
travelup.comUS$220
FindHotelUS$241
View all 17 deals
Prices are provided by our partners, and reflect nightly room rates, including all taxes and fees known to our partners. Please see our partners for more details.
Payments made by partners impact the order of prices displayed. Room types may vary.
sharont746
Brooklyn, New York, United States
153

Checked in to Ocean Manor Beach resort for a quick get away with my son. I found $40 fares on Jet Blue, so...
After checking around on a few sites, this seemed to have the most of what I wanted:
A clean, comfortable room
Direct beach access
A nice pool
Lounge chairs and umbrellas
A tiki bar and restaurant
..at a reasonable price..
I would save money by not having to rent a car to drive to the beach..everything would be there.
Well, that is the Ocean Manor!!
NOW, it is in dire need of work and upgrade.
No safe in room.
No fitness room
(Shower drain very slow. Room furniture is very worn) But if you do not plan to spend your day in the room, this is fine!!
Tiki bar food, beverages, location and service was great.
The service and food in the Italian Restaurant (Casa Calabria- big shout out to TEDDY for his excellent service!!!) was magnificent
There is a little coffee kiosk in the lobby
A spa
A boutique...
And nice service...
No complaints, other than maintainance issues.
Plan to enjoy my final day on the beach 'close to home
May consider staying againMore

Show less
Trip type: Travelled with family
See all 2,780 reviews
Payments made by partners impact the order of prices displayed. Room types may vary.
Nearby Hotels 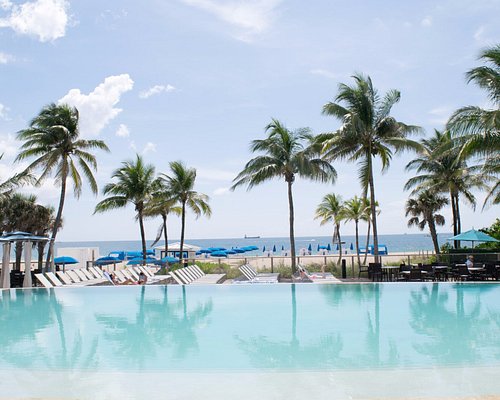 Taking safety measures
We compared the lowest prices from 19 websites
The Westin Fort Lauderdale Beach Resort
US$370
Booking.com
View deal
Hotels.com
US$365
travelup.com
US$346
getaroom.com
US$426
View all 18 deals from US$346
1,401 reviews
5.7 km from Ocean Manor Beach Resort Hotel

This review is the subjective opinion of a TripAdvisor member and not of TripAdvisor LLC
Michael S
Staten Island, New York
307
Reviewed 20 February 2018
Ok for a day or two

This hotel is a little run down. We had a 2 b/room suite (an upgrade) with another couple. Bathroom ceilings had obvious water damage with bad repairs and shower stall only had one door. Someone previously had broken into one bedroom, cracking the door and pry marks around the latch. Efficiency kitchen was dirty and old. I wouldn't book there again.

This review is the subjective opinion of a TripAdvisor member and not of TripAdvisor LLC
684kristyb
Pentwater, Michigan
1916
Reviewed 19 February 2018 via mobile
Better than expected

We vacationed here with our three kids and we gasped when we opened the room door. The view was unbelievable and the room was crisp and clean and so much more than we expected. Plenty of room for all of us. No complaints at all. Upon check-in, Chloe and Ariana were there to greet us and even fixed a discrepancy in billing no questions asked. My daughter and son got their haircut in the on site salon, and we ate at both the tiki bar and the Italian restaurant. We did take out from the Italian restaurant because that particular night was extremely busy. If we ever visit ft Lauderdale again this will always be our go to hotel. We had such a good time!

This review is the subjective opinion of a TripAdvisor member and not of TripAdvisor LLC
Nimabambam
Toronto, Canada
4125
Reviewed 17 February 2018 via mobile
Cockroaches

Nice resort, we had a good time until we started seeing cockroaches everywhere. We are totally grossed out, there were cockroaches in coffee maker. We’re leaving! Do not book here, you will regret it. The place is infested

This review is the subjective opinion of a TripAdvisor member and not of TripAdvisor LLC
bridgemaster33
Easton, Maryland
12
Reviewed 16 February 2018
Nice setting, poor attention to details

[Weeks ago, I sent this to two different email addresses at the hotel, hoping to get a response, but I have heard nothing.]

My wife and I stayed January 22-24, and overall, we enjoyed our stay, but many small details took away from our enjoyment.
We got off to a good start when we were given an oceanfront room (200) when we registered. The (standard) room was bright and spacious. The pool and areas around it were comfortable and welcoming. We enjoyed drinks at the tiki bar and appreciated the expansive menu. All of the staff we encountered was friendly and helpful. And there was a small fridge in the room. That's the good stuff, and it went a long way toward an enjoyable stay.
Here are some of the other things:
We arrived on a Monday, and planned to have dinner at Casa Calabria, after seeing the menu in the lobby in the afternoon. When we came down at dinner time, there was a "Closed Monday" sign taped to the door that had not been there earlier in the day.
I had called ahead to ask if the rooms had clocks. I was told "yes," but there was no clock in the room (but Housekeeping brought one up after my request).
Not only was there no "Do Not Disturb" sign, but it appears that the hotel doesn't have them. Just on our floor (second), I saw a number of handwritten signs taped to the doors on various rooms. When our sign came, it was on flimsy paper that appeared to have been a computer printout and cut from a larger piece of paper. It fell to the floor every time I opened the door. How is it not the norm for a large well-appointed hotel to have these signs?
There was a plastic ice bucket in the room, but even with directions, finding the ice machine hidden away on a corner of the first floor was like going on a scavenger hunt. Is that the only ice machine for the entire hotel?
The bathroom: The only surface available not on the floor was the corners of the sink--totally inadequate. There wasn't even a toilet seat cover to use as a surface. I did see one on website pictures, so maybe ours was just out for repairs or something. Still, it seems there was room to have put a shelf under the mirror; also a soapdish or toiletry shelf in the shower would have been nice, and a robe hook on the back of the door. Also, the light in the shower was not working.
The air conditioning itself was certainly adequate, but the loose vents rattled to the extent that it was impossible to have it on at night.
The lighting in the room was inadequate for any but the most cursory attempt at reading. Given the style of lamps, even brighter bulbs would not have helped much. And I do not think it is asking too much to have two of the same kind of chair in the room, instead of just one desk chair and one soft chair.
When we arrived on Monday the room was immaculately clean and neat, but on Tuesday, our only full day at the hotel, by 5 p.m. the room was still not made up even though we had been out all morning and early afternoon. We had to ask at the front desk to have the room serviced while we were out to dinner.
Certain things--the lights, the chairs, the DND signs, the bathroom--appear to be systemic; the rest, maybe are oversights. The foundation for turning adequate into sensational seems to be there, but so does an perception of doing the minimum and being barely good enough.

Room tip: If your confirmation comes back saying "king or two doubles" and you booked king, be sure to call ahead and confirm you got a king.
Ask bridgemaster33 about Ocean Manor Beach Resort Hotel
2  Thank bridgemaster33