US$200
US$173
View deal
Hotels.comUS$181
BestWestern.comUS$181
Trip.comUS$200
View all 20 deals
Prices are provided by our partners, and reflect nightly room rates, including all taxes and fees known to our partners. Please see our partners for more details.
Payments made by partners impact the order of prices displayed. Room types may vary.
Deo K
11

Clean comfortable hotel. Good beds great breakfast. Staff was very friendly. The breakfast guys were great although they didn’t have their preferred bacon they still had delicious bacon available.
I would recommend this hotel to anyone and I would stay here again when I’m passing through Colorado of my next business trip

Trip type: Travelled on business
See all 891 reviews
Payments made by partners impact the order of prices displayed. Room types may vary.
Nearby Hotels 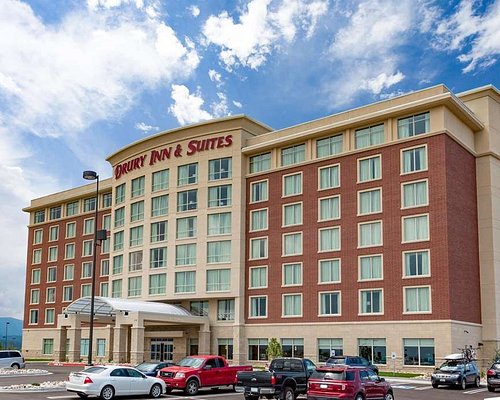 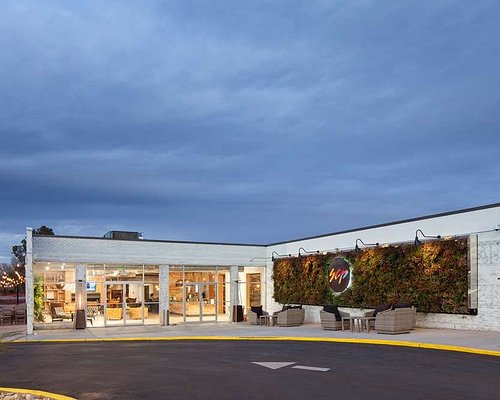 Taking safety measures
We compared the lowest prices from 19 websites
The Mining Exchange a Wyndham Grand Hotel & Spa
US$318
Booking.com
View deal
Reserve now, pay at stay
Expedia.com
US$299
Trip.com
US$268
Traveluro
US$342
View all 20 deals from US$268
2,372 reviews
4.5 km from Best Western Executive Inn & Suites

Taking safety measures
We compared the lowest prices from 19 websites
Breakfast included
Quality Inn & Suites, Garden of the Gods
US$183
Booking.com
View deal
Quality
US$182
Priceline
US$175
Lol.travel
US$227
View all 19 deals from US$175
597 reviews
11.4 km from Best Western Executive Inn & Suites

I don't like to post negative reviews, so I'll try to stick to the facts that contributed to our less-than-ideal stay at the Best Western Executive Inn & Suites in Colorado Springs (on Harrison Road).

This hotel is not in a desirable location. It is difficult to get in and out of from the street. It is located behind two boarded-up former restaurants (as others have mentioned). It is right next to a downhill stretch of I-25 where large trucks frequently use loud compression braking. The white fence in the back of the property has razor wire on top of it.

We were not allowed to check-in 15 minutes early (2:45PM) because a shift change was in progress. When we came back later, we were unable to request a room facing away from I-25. We were told all rooms were assigned at 8:00AM. Staff allowed us to inspect our assigned room before taking it, but it turned out to be louder at night than we experienced during check-in (our error). We looked into changing hotels for days two and three of our stay but we had booked well in advance and rates had gone up $100 per night in this area. So, we decided to tough it out. I would note that during our 3-day stay this hotel didn’t appear to be more that 25% occupied, and a room change could have been offered up.

We tried to apply three Best Western gift cards during check-in but were told we couldn’t since there were no charges on our account yet. We were told to present the gift cards at check-out instead, which we did. At that time, we were told they should have been applied at check-in. It shortly became apparent that the front desk clerk on duty for our Saturday morning check-out was unfamiliar with gift cards since he/she pulled out the procedure manual and then had to make a phone call to a more senior person. Even that did not produce on-site results and they ended up taking a picture of our gift card numbers and asked us to leave our name, phone, and E-mail. At the time of this review, five days later, we have not received any contact and the gift card problem is still unresolved.

On days two and three, both our access cards failed to open the outside doors or our room. On both days we had to walk around to the front of the hotel (in the dark) and have the front desk reprogram our cards. On both days the front desk staff told us to keep our cards away from phones and electronics (which we did). On the last day I asked, if the cards were not programmed for all three days would it cause this problem. and was told yes, it could. During check-out, while we were waiting for our gift cards to be handled, three other guests showed up to have their cards reprogrammed, so this problem was not unique to us. For all three of those guests (and us) the front desk clerks only asked for a room number and then promptly re-programmed the cards. One gentleman came back a second time because the first room number he gave the clerk was incorrect. No guest room/name checks or photo ID validations were witnessed, creating a big security problem. [editorial on] Have a key? Get into a room. [editorial off]

There is no designated place to park a trailer at this hotel. All parking spaces are single length dead-end spaces. All access driveways are marked as Fire Lanes (no parking). We had a small U-Haul and because the hotel wasn’t very full, we could park across five spaces in the rear, so it worked out OK for us for the one night. RVs or longer trailers would likely have nowhere to park at this hotel.

To add insult to injury, on the last day when we left our garbage cans outside our room door to be emptied, someone left their garbage in one of our cans. Not staff’s fault, but come on…

So, now for our final opinions: This hotel appears to operating on a shoestring budget. I suspect they can “check the boxes” of a Best Western inspection, but that doesn’t make for an enjoyable stay. Staff was more untrained/unknowledgeable than we are used to experiencing. And we ultimately left the hotel with an unresolved billing problem. My spouse commented that “Nothing seems to be their fault.” Polite? Yes. Competent? Nope. Friendly? Not to the point of being welcoming.

Bottom line: Even if we were offered free nights to stay at this hotel, we would pay to stay elsewhere. Enough said.

Room tip: Request a room that doesn't face I-25, ** before 8AM on the day of your arrival **
Ask SouthDallasTX about Best Western Executive Inn & Suites
1  Thank SouthDallasTX

This review is the subjective opinion of a TripAdvisor member and not of TripAdvisor LLC
grand33
Denver, Colorado
6832
Reviewed 7 June 2021
Can't easily recommend anymore

Since our last visit, things have changed in the immediate neighborhood outside of the hotel. The Denny's that was just closed the last time has now been significantly vandalized, and the Village Inn that had been open is being converted into a pot dispensary. There was also a problem with the back door, which could not be opened with the room key, forcing most parking to the front of the building. Next time we stay in the area, it will be somewhere else. The room, service, and breakfast were all just fine, though.

Thank you for taking the time to leave us a review regarding your recent stay. We are thrilled to see that our team exceeded your expectations.
Even though beyond our control, the empty restaurants have been bought and some new business are coming in. I am confident that this will help the overall appearance .
We do hope that we can host you again, when back in the area.

Report response as inappropriateThank you. We appreciate your input.
This response is the subjective opinion of the management representative and not of TripAdvisor LLC
david m
Chubbuck, Idaho
416121
Reviewed 7 June 2021
a good place but needs improvements

This Best Western Hotel like all the previous comments stated it is a nice hotel, but in a very poor location and needs improvements. First I will say the staff are indeed very professional and friendly. One of them I forget her name kept opening the door for me each time I'd come bringing in our luggage when we first arrived. The location of the hotel is in a place that has two businesses that are being torn down and there are a lot of holes in the parking lot area. Also, the hotel room we stayed the beds were good, the shower was good, but the major issue we had was cleanliness was an issue. There was hair in the bath tub, and a lot of dust in the vents in the ceiling. Also, one other issue was that the mini fridge we had in our room was not working very well. And the power outlet was broken. And the AC machine wasn't working very well. Yet all in all we did have a good visit. Not sure if we would come back if we visited Colorado springs again. The free breakfast was good.

This review is the subjective opinion of a TripAdvisor member and not of TripAdvisor LLC
Boystowtraveler
Chicago, Illinois
471177
Reviewed 27 May 2021
Nice place, scary locale!!!!!!

This set back from the road, yet right beside a freeway. The property is nestled between two defunct and nasty buildings that are out of business. So, you may encounter derelicts about the area. Rooms seem dated and the whole property needs an update. It used to be a great place to go, but it just looks shabby now. Maybe this BW should move. However, the saving grace was that it had a hot breakfast unlike most other BW's.

Review collected in partnership with Best Western
This business uses tools provided by Tripadvisor (or one of its official Review Collection Partners) to encourage and collect guest reviews, including this one.
Ask Boystowtraveler about Best Western Executive Inn & Suites
2  Thank Boystowtraveler

This review is the subjective opinion of a TripAdvisor member and not of TripAdvisor LLC
dheiman62
33
Reviewed 24 May 2021
Location, Location

First, let me say the staff is very friendly. The room was large and clean. When we drove up to the hotel, my first thought was how can I cancel my reservation. It sits behind two closed restaurants, and in the shadow of a major highway. The exterior looks dirty. The room is dark even with all the lights on. The A/C blows cold air but it may be own 5 minutes and off for an hour.

Review collected in partnership with Best Western
This business uses tools provided by Tripadvisor (or one of its official Review Collection Partners) to encourage and collect guest reviews, including this one.
Ask dheiman62 about Best Western Executive Inn & Suites
1  Thank dheiman62