Alpine Inn & Suites
Lowest prices for your stay
Lock in the lowest price from these sites
US$119
US$91
Free cancellation until 22/05/21
Reserve now, pay at stay
View deal
PricelineUS$91
FindHotelUS$91
Hotels.comUS$91
Expedia.comUS$91
eDreamsUS$91
StayForLongUS$119
View all 18 deals
Prices are provided by our partners, and reflect nightly room rates, including all taxes and fees known to our partners. Please see our partners for more details.
Payments made by partners impact the order of prices displayed. Room types may vary.
jvcaf3
San Francisco, California
11

Front desk Rolinda is the best

This place is decent, however two nights ago there were some loud people drinking the rear parking lot late at night. So the next morning I asked Rolinda at front desk to help me move to a different suit and went above and beyond to accommodate me. Thank you Rolinda!

Trip type: Travelled solo
See all 504 reviews
Payments made by partners impact the order of prices displayed. Room types may vary.
Nearby Hotels 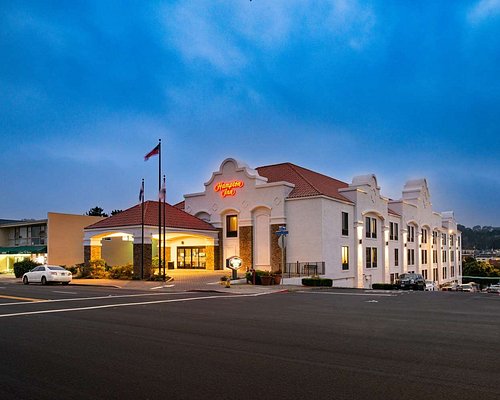 FindHotel
View deal
Destinia.com
US$28
Agoda.com
US$26
Trip.com
View all 7 deals from US$26
0 reviews
6.8 km from Alpine Inn & Suites
We compared the lowest prices from 7 websites

Boutique hotel with large rooms. Ours had vintage furniture and decor. No carpet on the floor which is very nice. Fridge, microwave and coffee maker. Also coffee from the office is available. Nice staff. Free parking for one car.


Thank you for your review, we would like to take your feedback seriously and consider it to improve our customer service to you. We are glad you enjoyed your stay with us! We strive to make every stay and experience with us different and enjoyable.

Report response as inappropriateThank you. We appreciate your input.
This response is the subjective opinion of the management representative and not of TripAdvisor LLC
CharnaG_13
San Francisco, California
25
Reviewed 20 June 2020 via mobile
Nice but Smokey

My room was small but comfortable and a bargain for a hotel near San Francisco. The staff was welcoming and accommodating and the coffee machine in the reception area was a treat. The downside — while the inn is non-smoking, at least in the rooms, my neighbor with whom I shared a small stairway sat happily smoking a cigarette on the stairs which wafted into my room. I asked him to not smoke there and he left. I called the front desk and was told smoking was only allowed in two areas away from the rooms. Again, the next morning, the neighbors on the other side were smoking and also talking loudly. It was 6am! When I alerted the front desk, an employee came out immediately and told them not to smoke there. They left after a few more puffs and loud words.

If smoking is permitted only in certain areas away from the rooms, why isn’t this communicated at check-in. I was certainly not informed of this. It’s not enough to say that smoking is not allowed in the rooms — smokers need to be directed to areas where they can smoke and have it be far enough away to not bother those of us who value and require clean air.

Also, while I appreciated the signage directing all people in the reception area to wear masks (it’s mandatory, right?), a guest was in there mask-less. In fact, when I checked in the front desk person was also mask-less. OK, there was a plexiglass barrier, but the morning front desk person wore a mask.

I wanted to love this property because it’s close to home and convenient and I was looking to book a room for a week. But I think I’ll keep looking.

Thank you for your review and response. We try to make every guest experience with us to the best of our customer service abilities. It is unfortunate that you had to encounter the situation of having other guest smoke outside the room. Our rooms are non-smoking and we try to explain to guest where the smoking areas are, which we will encourage strongly from now on.

Mask is required on our property and staff are also required to wear them. This is a serious issue we all are encountering and is a serious concern for all of us.

We again apologize for the experience you have encountered.

Have a safe travel,

Report response as inappropriateThank you. We appreciate your input.
This response is the subjective opinion of the management representative and not of TripAdvisor LLC
MrArmandillo
San Jose, California
36
Reviewed 27 January 2020
Awful Customer Service

Recently, I stayed at this location and experienced horrendous customer service. On the second night of my stay, I received a phone call after 10 p.m. telling me "your card has been declined and we've changed the locks on your room". A normal business would give me a chance to fix it BEFORE locking me out of my room. It turns out, my credit card's fraud prevention flagged the hotel for some reason. I gave them the updated info, but still had to go check back in late at night to receive new keys.

I expressed my displeasure at what occurred to the front desk clerk and she just kept saying "that's fine" over and over in a rude manner. She clearly didn't care.

The next morning I returned to the front to complain about what had occurred and a different clerk told me "yes, staff turnover here is high" and promised me a 25% discount for my troubles.

Surprise, surprise, there was no discount given.

It took several calls to reach the hotel when the manager would be in. Finally, they were in but the front desk clerk refused to put me through. I asked over and over to speak to the manager, but never got through.

This is not how you treat customers or run a business..

First, we would like to apologize to you for the experience you have encountered with our staff. We will rectify our actions and take your feedback into improving our customer service.

Our Manager has reached out and discuss this experience with you in order to better manage the situation.

Report response as inappropriateThank you. We appreciate your input.
This response is the subjective opinion of the management representative and not of TripAdvisor LLC
QTHarris
Arden, North Carolina
1532
Reviewed 19 January 2020
Clean, Convenient to Bus Line & Friendly

This isn't a fancy place, but it is clean and the bed we had was good. The room is small, but you can make do. The heating and small refrigerator could be a bit noisy, but they didn't keep us awake. The staff was very friendly and helpful. We'd stay here again.

Thank you for the positive review and for taking the time to recognize our Alpine Inn and Suites. We are delighted that our staff provided you with friendly and helpful service. Our goal is to provide an extraordinary stay that exceeds your expectations. Thank you for your recommendation.

We look forward to accommodating you again soon.

Report response as inappropriateThank you. We appreciate your input.
This response is the subjective opinion of the management representative and not of TripAdvisor LLC
1traveler2018
Gold Hill, Oregon
510
Reviewed 12 November 2019
Great Place! Very friendly staff!

If you're visiting San Francisco (or are in the area) this is a fantastic place to stay for anywhere near the price. Upon arriving on the property, the first people we met were two cleaning senoritas (Disiana and Marisol). Talk about friendly! They were so cheerful and sweet while they worked hard cleaning rooms. Then my lovely new bride (we are on our honeymoon) Marisa and I went to the front desk to check in. Fnan greeted us - and he was super nice and efficient. Then we met Lisa. Wow! The owners of this property obviously hire the best people! The room was clean, quiet and comfortable. We couldn't have been any happier. HIGHLY RECOMMENDED!

Congratulations to you and Marisa! Thank you for choosing Alpine Inn and Suites for your honeymoon. It is lovely to read that we exceeded your expectations and that you and your family loved our devoted staff, accommodations, and inspiring location. Our thoughtful Ladies and Gentlemen make it their mission to build strong relationships through personal connections with our guests. We will enjoy recognizing Disiana, Marisol, Fran and Lisa, as well as others who helped to make a difference in your stay. It was an honor having you as our guest, and we hope to have the opportunity to welcome you back on a future visit.

Report response as inappropriateThank you. We appreciate your input.
This response is the subjective opinion of the management representative and not of TripAdvisor LLC
View more reviews
PreviousNext
123…84