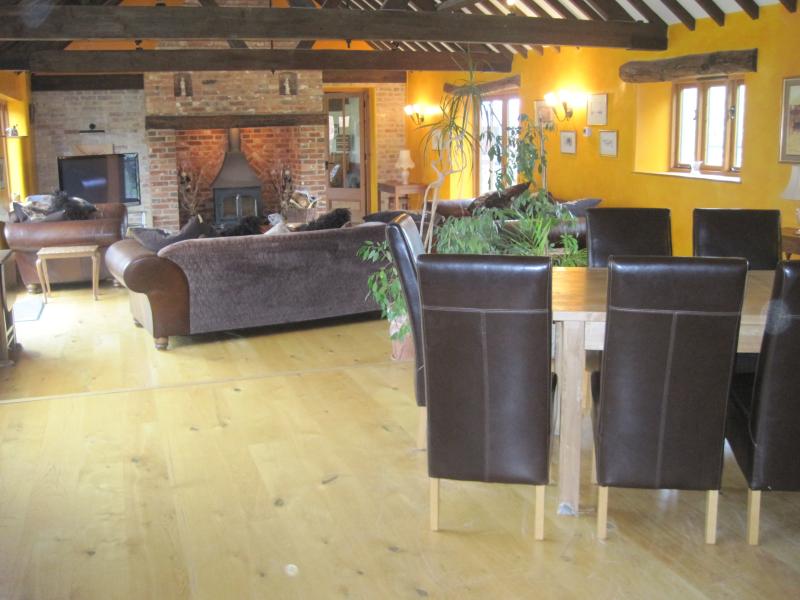 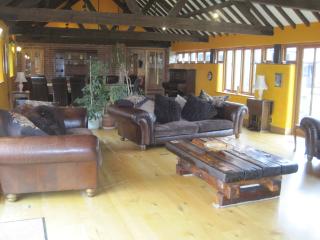 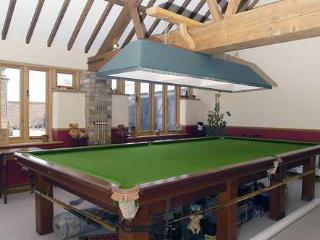 Excellent - based on 17 reviews
Write a Review

The ideal location for an extended (4 generation) family holiday in the quiet rural Norfolk countryside. Accommodation is very spacious even for 11 folk ranging from mid 80's to under 6 months! old

Even if the weather isn't great enough for the short car journey to the coast, there is plenty to do in the barn - with the full sized snooker table a big win. Local walks abound..

One benefit for the older visitor is that almost all the property is on one level.

Date of stay: July 2016
Liked best: Space and luxurious feel
Liked least: Dribbling hot kitchen tap and fiddly door lock.
Travelling group: Extended Family
Would you recommend this hotel to a friend?   Yes.
Recommended for:
Was this review helpful? Yes
This review is the subjective opinion of a TripAdvisor member and not of TripAdvisor LLC
Thank you so much we cetainly enjoyed your company and glad you loved the barn and norfolk, weather difficult to order great this week very warm Have a safe journey back
This response is the subjective opinion of the management representative and not of TripAdvisor LLC
Problem with this review? Thank you. We appreciate your input.

As the title suggests lots of things were wrong that should have been right.
Firstly the WI-FI. I appreciate the barn is in the middle of nowhere BUT please put in the description that the phone signals and the internet can be very intermittent. We had three different phone networks and could not send or receive a text. Make or receive a call or use the internet. Secondly there was NO sky T.V as advertised. On making a complaint to the owner through the holiday lettings company it was said that the previous guests broke the sky box. If this was so then maybe the owner could have advised us of this on arrival. The bath in the en-suite was chipped and needed re-enameling so was unusable. Light-bulbs out in the en-suite bathroom. The kitchen sink hot tap came out in the slowest dribble imaginable. These are only small things but are quite annoying and should be attended to.
On the positive side the house was large and comfortable, and the snooker table a great bonus.

Date of stay: April 2016
Liked best: The size of the property
Liked least: No WI-FI as advertised.
Travelling group: Extended Family
Would you recommend this hotel to a friend?   No.
Recommended for:
Was this review helpful? Yes
This review is the subjective opinion of a TripAdvisor member and not of TripAdvisor LLC
So sorry you had these niggles if however you had come to us we could have helped you but to complain after you have left is not very helpful we now have new sky box and bath is usuable it does not leak ! Light bulbs are avaliable in barn as there are so many and if people dont tell us we dont know glad you did have a mice time though
This response is the subjective opinion of the management representative and not of TripAdvisor LLC
Problem with this review? Thank you. We appreciate your input.

New Year celebrations for ourselves, 4 adult 'children' & partners, husbands, boyfriends, dogs, etc... Perfect - so much room, fenced in garden, lovely bedrooms,..& a thoughtful goodie box on arrival with a bottle of Prosseco to see the new Year in!
Had an amazing time & will be definitely be back!!

Date of stay: December 2015
Travelling group: Large Group
Would you recommend this hotel to a friend?   Yes.
Was this review helpful? Yes
This review is the subjective opinion of a TripAdvisor member and not of TripAdvisor LLC
Thank you jane ,
We loved having you stay and thank you so much for leaving courtyard barn in such lovely condition after your stay ,we look forward to seeing you again soon
This response is the subjective opinion of the management representative and not of TripAdvisor LLC
Problem with this review? Thank you. We appreciate your input.

22 helpful votes
“Fabulous place for family and friends get together!”
Reviewed 3 November 2015 for a stay in October 2015
1
person found this review helpful

Just back from a weekend stay at Courtyard Barn with a family group of ten. Snooker table was a massive hit with the men and the hot tub was very relaxing for the ladies. Elderly parents appreciated the fact it is mainly all on one level (low step in living room and into snooker room). Kids slept in the twin loft room - it is quite tiny and only really suited for children but not toddlers as staircase is literally a steep ladder.
Very well equipped, all the cutlery, crockery etc that you need plus a cupboard with sauces salt etc which is always handy. Whole place was lovely and warm in fact a smidge too warm in the kitchen sometimes with Aga throwing out heat.
Wifi was Ok once we logged on but there was no mobile signal and no landline in the house - but calls could be made from the office next door. One niggle was that we could not lock the house when we went out for the day however I think the owners are always around.
Lovely to see the horses in the surrounding fields and some great dog walking in the area. It is quite remote so you do need to drive to nearest towns for any shops etc, Holt was 15 minutes away by car. We had a lovely pub meal at The Hunnybell in Hunworth 10 minutes away. We will definitely be visiting again.

Date of stay: October 2015
Liked best: Snooker table
Liked least: Slight smell of manure but that's the country!
Travelling group: Large Group
Would you recommend this hotel to a friend?   Yes.
Recommended for:
Was this review helpful? Yes
This review is the subjective opinion of a TripAdvisor member and not of TripAdvisor LLC
Thank you Jane for your comments glad you enjoyed your stay after a long season with lots people always little niggles thank you for pointing out them to us. We have a lock smith booked to redo the whole place as many keys have gone off with our clients so hopefully that will solve that one thank you again kind regards Victoria
This response is the subjective opinion of the management representative and not of TripAdvisor LLC
Problem with this review? Thank you. We appreciate your input.

We stayed at the Courtyard Barn for a hen weekend, all 10 of us. There was plenty of space for everyone, sofas were massive and there were loads of games there we could play. It was a novelty to cook on the aga which heated the kitchen lovely, a great centrepiece for the room. The bedding was clean, loads of hot running water and the bath in the en suite was the biggest bath I had ever seen! A very nice character barn conversion. There were a few things that we had a problem with, firstly no other toilet paper was supplied except for 1 extra roll so we had 4 rolls for 10 of us over a 3 night/4 day stay which wasn't enough. We were told they don't supply anymore rolls which I have never come across before and I have stayed at many holiday cottages but we weren't advised to bring any with us. I would rather pay £2 extra for the barn and get another 4 rolls! Another major problem was the amount of flies we had in there, we have never seen so many. We had planned to have a buffet one evening but we couldn't due to the amount of flies landing everywhere, they even crawled on you when you were sleeping. One of the party killed 18 flies which were in just the bathroom! One evening in the kitchen we killed 60 flies but within a few hours there were loads back again. In the sitting room on our last night we killed over 80 flies which we kept in a pile so the owners know we are telling the truth. We didn't have windows/doors open so they were not coming in that way, it is more than likely they were hatching inside the barn somewhere. I live in the country but I do not get invasions like this. It needed a thorough clean everywhere, we noticed part of a game under the sofa which we didn't get out and there were bits of food down the side of the aga and down the side of the fridge there was dried milk. Some of the external doors are locked with no key to open it like the one in the master bedroom. The door to the grass area outside is unlocked but with no key to lock it and the front door does not lock from the inside or the outside so if you go out you can't lock the door! We had to wedge the chair against the door at night to feel more at ease even though the owner said (when he was asked about the door not locking) we would be fine he has never known a break in but that isn't the point. Also if you go into the hot tub, which did smell like old fish tank water then do not shut that door behind you as you won't be able to get back in the house. We were appreciative of the 2 baskets of logs the owner gave us and it was nice to see how they renovated the barn, lots of pictures near utility room. Overall we all enjoyed ourselves and if the few issues above were sorted out it would be 10/10. We would certainly recommend the chef coming to cook and the pamper session.

Date of stay: September 2015
Liked best: The space, location and wood burner
Liked least: The lack of toilet rolls, flies and door locks
Travelling group: Large Group
Would you recommend this hotel to a friend?   Yes.
Recommended for:
Was this review helpful? Yes
This review is the subjective opinion of a TripAdvisor member and not of TripAdvisor LLC
Hi thank you for your comments which are being acted upon we have a lock smith booked to change the system to one key as so many of the keys have been taken ! So hope fully that will help , sorry about loo roll as a holiday cottage we have always supplied one roll per loo as most people bring there own sorry you where caught short I always have some spares if need but moment gone. The flies we had an issue with farmer muck spreading on field and not ploughing in straight away and with a very wet summer this causes a problem but that's living in country ! We are always looking to improve so thanks again glad you had a lovely stay Victoria
This response is the subjective opinion of the management representative and not of TripAdvisor LLC
Problem with this review? Thank you. We appreciate your input.
Previous Next
1 2 3 4
Updating list...
Do you own a holiday rental? List it here.

Looking for a place to stay in Briston?
View all 6 holiday rentals