Relax - Review of The Frangipani Tree by Edwards Collection

US$192
US$168
View deal
Free cancellation until 05/06/22
Agoda.comUS$167
Trip.com
Etrip
View all 13 deals
Payments made by partners impact the order of prices displayed. Room types may vary.
Prices are provided by our partners, and reflect nightly room rates, including all taxes and fees known to our partners. Please see our partners for more details.
jupo74
Merano, Italy
73

Trip type: Travelled as a couple
See all 557 reviews
Payments made by partners impact the order of prices displayed. Room types may vary.
Nearby Hotels 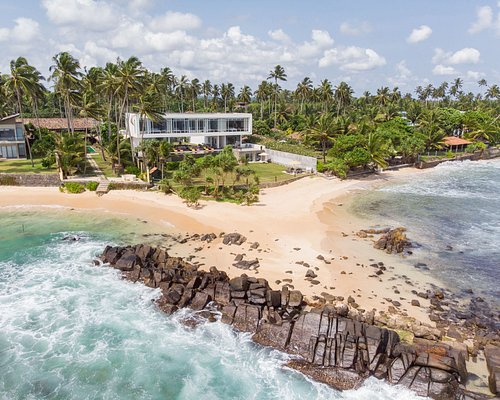 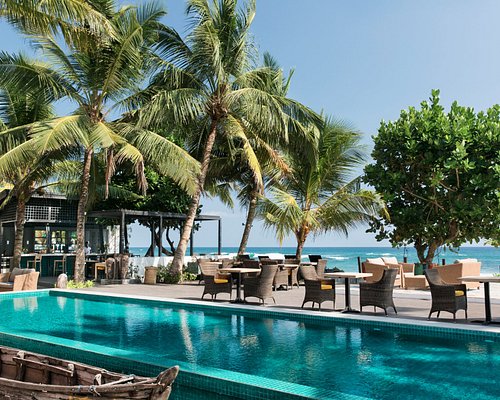 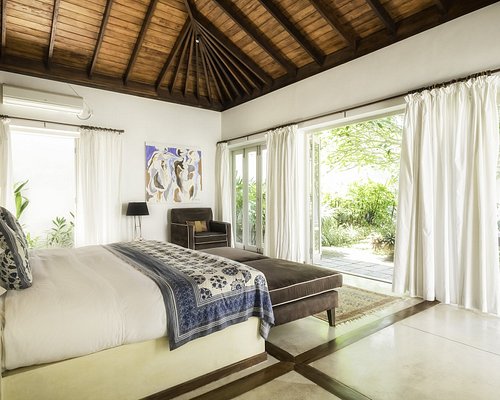 The place is absolutely stunning! Perfect for a relaxing weekend and get away from the busy life in Colombo. The property is beautifully designed. The rooms are spacious and we especially loved the outdoor bathroom with tub! Can't wait to come back.

This review is the subjective opinion of a Tripadvisor member and not of TripAdvisor LLC.
AndrewJ990
Nottingham, United Kingdom
1739
Reviewed 3 May 2019
Give the turtles a wave!

We spent 5 nights at the Frangipani Tree at the end of our touring holiday. It was lovely to just stop and relax. Our room was a bungalow facing the sea and was just perfect.

Each afternoon at precisely 4 o'clock we would sit watching the sea and a parade of turtles would swim past, their heads bobbing up and they would wave the occasional flipper.

The food wasn't amazing, but I had no cause to complain at all. The curry and rice was very good with lots of tasty accompaniments and I would strongly recommend the Sri Lankan breakfast - I had egg hoppers with potato curry several mornings which set me up for the day.

The staff couldn't have been more helpful and arranged trips for us to watch whales (we saw blue whales) and trips into nearby Galle Fort.

The pool was just perfect, just the right depth and long enough to swim properly in. It also benefitted from a shady area. There is a shallow section at one end suitable for small children or just sitting.

My partner took advantage of the spa which was reasonably priced and she told me that the Ayurvedic massage she had was the best ever.

I would heartily recommend this hotel if you want to stay somewhere beautiful and peaceful.

This review is the subjective opinion of a Tripadvisor member and not of TripAdvisor LLC.
Hotluca
Manchester, United Kingdom
89150
Reviewed 24 April 2019
Lovely way to end a holiday

We turned up a little earlier than planned here, but oh my goodness what a treat we were in for. A small and intimate hotel on the shore of the Indian Ocean about 20 minutes by tuk from Galle Fort and an oasis of calm. The welcome was warm and the staff were absolutely delightful and couldn't do enough for you. The rooms were perfect - spotless, air conditioned and spacious (there are only a few rooms so I imagine they are all pretty similar.

We ate at the hotel most days, for ease really, and the food was good, but I would say that the best dishes we ate were the Sri Lankan derived ones (and why not, of course!) the more western dishes were ok if you wanted a break from curry, but the main event was the Sri Lankan curries - just don't have a starter if you're having a curry because they come with rice, dhal, two veg dishes, breads.... Similarly, Sri Lankan breakfast was divine (needed ordering the night before) and a massive choice of string hoppers, egg hoppers, curry and so on made for a super breakfast treat. The western breakfasts were fine.

Because we were there over the astrological new year celebrations there was no alcohol served in the bar and to be honest when we left on the following Thursday they still hadn't stocked up with anything apart from Lion beer. As it's a small resort I don't know whether this is indicative of their bar generally, should that sort of thing matter to you. You can always hop on a tuk to the nearest supermarket and get your own alcohol with no problem at all.

The duty manager Ushi (sp) was delightful and helpful and all of the team were top notch.

We had one minor issue on arrival wherein the central office had quoted us a rate for the two extra nights that weren't already booked but when we arrived they said that they'd misquoted the rate and there was a $125 dollar shortfall and would we pay it. I have no issue with people making mistakes and we were so grateful that they had a room that we would not dream of not helping the person out. However when I was messaged saying that if I could pay the difference it would prevent anything 'hindering our stay' I took a dim view of an oblique threat that, should I choose not to rectify their mistake our stay would be affected. Not quite what we expected from a luxury resort/hotel chain.

This review is the subjective opinion of a Tripadvisor member and not of TripAdvisor LLC.
mariaj415
East Sussex, United Kingdom
5246
Reviewed 23 April 2019
Fawlty Towers but OK!

I spent 16 days in Sri Lanka with my husband and two children and when booking through Blue Lanka tours (outstanding) I should have gone with my gut feeling (after reading other reviews) and stayed somewhere else, never mind. In fairness after staying at 7 other excellent hotels this was our last stop which is always going to be a challenge for the Hotel in question as I had so much to compare it to. It is 2.5 times more expensive than any other "5 star" hotel we stayed in and the service (albeit they try very hard and it is not a direct criticism of the staff) is Fawlty Toweresque owing to a lack of leadership and direction, however this does bring it's own fun. For example one ice bucket and one bottle opener in the whole resort, safes that are not screwed to the wall, other safes that you can't open because the batteries have run out, fans that are so loud you can't sleep, A/C that doesn't work properly, sub-standard breakfast (again comparing it to the other hotels). However, all of these minor issues were a huge deal to the Hotel who were very responsive and we thank them for that. It is a beautiful setting on a stunning beach and if we had started our tour at this hotel, ignorant of prices and standards we would have probably given it 5 stars! This hotel could be amazing with some better leadership and bringing prices in line with the rest of the island.

This review is the subjective opinion of a Tripadvisor member and not of TripAdvisor LLC.
Kate M
4451
Reviewed 23 April 2019
Gorgeous hotel

We had a lovely stay in this beautiful hotel. The rooms are excellent - beautiful, cool and sophisticated. Fabulous pool and wonderful service. We were staying here when the trouble started in Sri Lanka and we were so well looked after. Staff went over and above what they needed to do to keep us informed of what was going on and to make sure we were safe and able to get to the airport on time.

Room tip: Most room have a view of the sea
Ask Kate M about The Frangipani Tree by Edwards Collection
Thank Kate M

This review is the subjective opinion of a Tripadvisor member and not of TripAdvisor LLC.
View more reviews
PreviousNext
1…678…
<script type='text/javascript' crossorigin='anonymous' async onerror='__scriptLoadError(this,true);' src='https://static.tacdn.com/assets/assets/cDcdfi/0c