US$189
View deal
Free cancellation until 15/05/21
US$265
US$187
View deal
SAVE US$78
Free cancellation until 14/05/21
Reserve now, pay at stay
eDreamsUS$187
TripadvisorUS$188
Trip.comUS$265
View all 15 deals
Prices are provided by our partners, and reflect nightly room rates, including all taxes and fees known to our partners. Please see our partners for more details.
Payments made by partners impact the order of prices displayed. Room types may vary.
SvensonABC
Malaga, Spain
106

We were recommended this hotel as a meeting point and managed to squeeze in a Menu Del Dia for lunch! The mixed salad was plentiful including the lovely fresh vibrant red local tomatoes. Main course was pretty good, chicken with garlic (we thought we would get grilled chicken breast - it didn't specify on the menu exactly what part of the chicken) in the end we were served chicken pieces (small thighs) the flavour was yummy, cooked with onions, red and green peppers and home made chips (definitely cooked in the meat juices and oils!) the bread came in handy to mop it all up! Dessert was nice; not too big - flan (which turned out to be like Creme Caramel and rice pudding! Drinks were not included, but still good value for money if you would like to fill up on an afternoon lunch! Nice setting with some pretty flower pots and views of the area. Worth a visit if you're hungry and in the area!More

Show less
See all 241 reviews
Payments made by partners impact the order of prices displayed. Room types may vary.
Nearby Hotels 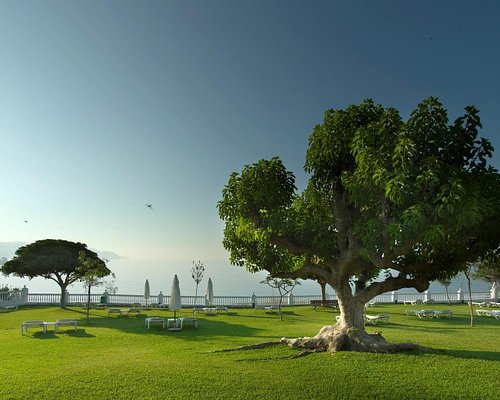 Parador de Nerja
US$117
Booking.com
View deal
Free cancellation
Reserve now, pay at stay
eDreams
FindHotel
US$114
StayForLong
US$230
View all 16 deals from US$114
1,654 reviews
2.3 km from Hotel Al-Andalus
We compared the lowest prices from 16 websites 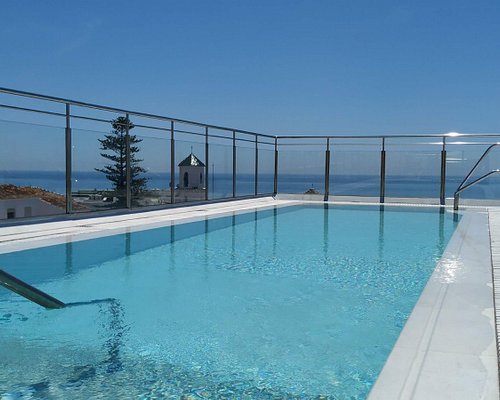 Situated high up to the right hand side outskirts of Nerja This lovely little hotel is sadly situated quite a way outside town and so I think misses the public. It was very clean, lovely room and a great bar/restaurant and swimming pool. We only stayed the one night as a pit stop but I would definitely stay here again.

This review is the subjective opinion of a TripAdvisor member and not of TripAdvisor LLC
833harshab
Olney, United Kingdom
128
Reviewed 25 February 2020 via mobile
Lovely friendly hotel close to the caves

We only booked one night but decided to stay an extra night as they we very welcoming and the rooms very spacious and clean. It’s a good 30 / 40 minute walk to Nerja which we managed a few times. It’s along a main toad do not the most scenic.
We ate breakfast in the hotel which was very cheap but a reasonable buffet and also because there are no other eateries near by except the cave restaurant.
A bonus for us was that it offered free parking in the hotel.

Thank you so much for choosing us and sharing your positive experience with us. We are so glad to know that you decided to stay an extra night because you liked the room and welcome.

We are very happy to know that you liked our buffet breakfast, it will be a pleasure to assist you again!

Report response as inappropriateThank you. We appreciate your input.
This response is the subjective opinion of the management representative and not of TripAdvisor LLC
mgsnorwich
Norwich, United Kingdom
1003468
Reviewed 12 November 2019
Large dinner event

My local club held a celebratory dinner here this autumn and the hotel coped with 60+ attendees admirably.
The pre-dinner drinks and canapes were very good and the meal was good. We all had the same, starting with a smoked salmon salad (could have been more salmon) and followed with a chicken breast and assorted vegetables (of which there was a surplus!).
There was pavlova for dessert.
After dinner the brandies and other digestifs were substantial!

Thank you for choosing us to held a celebratory dinner with your local club. It is a pleasure to know that the meal was good and liked drinks, canapes, desserts and digestifs.

We would like to thank you for sharing your experience, we hope to see you soon!

Report response as inappropriateThank you. We appreciate your input.
This response is the subjective opinion of the management representative and not of TripAdvisor LLC
GSinAltea
Altea, Spain
14074
Reviewed 2 September 2019 via mobile
If you like black mould, this is the hotel for you!

We booked hotel Al-andalus via a well known booking site.

We arrived at the hotel around 9 p.m. following a long drive. Once we had booked in, we were taken for a short walk along a side street, adjacent to the hotel. When we arrived, it was clearly a small, basic apartment, rather than a hotel room, which we had booked. However, given it was quite late at night and we were tired, we decided to stay.

My husband was in the shower when he asked me to look at what appeared to be black mould around the tiling. As he had already started to shower, I advised that he finish. I then inspected the shower and discovered black mould throughout the grouting of the tiles, along with cracked tiles. I rubbed the mould with my finger and it was easily removed. The drain of the shower was also covered in black mould. It was evident that the shower had not been clean for some considerable time. I then inspected the fridge and also discovered black, wet mould along the seal of the fridge.

I informed a staff member and he came to look at the shower and fridge. He admitted that it was obvious these areas had not been cleaned. I requested another room. A few minutes later, he returned with a cleaner, carrying a bottle of bleach. I informed him that this was not good enough and we were not staying in the room. He said no other rooms were available. I then went to the reception to ask for a refund and that we were not staying at the hotel. The female staff member (quite likely the manager) blankly refused, stating that the shower had been used and the 'room' would have to be cleaned again! At this stage, I offered to pay a reasonable price for my husband using the shower. She refused and appeared disinterested! I informed her I would be complaining to the booking company. We left without any refund or apology.

I have to state, that this is the worst hotel I have ever had the misfortune to visit. With so many hotels and other places to stay, in and around Nerja, I would give Andalus, a very 'wide berth'.

We are sorry to read your comments about all the issues you mentioned. Our only aim is try to do our best in all areas, and not being able to fulfill your complete satisfaction, for us, is a way of knowing that we must pay more attention to details. That is why, we kindly ask for your apologies.

We are sorry your experience in Al Andalus Hotel didn’t meet your expectations and we hope to have the opportunity of welcoming you back in near future.

Report response as inappropriateThank you. We appreciate your input.
This response is the subjective opinion of the management representative and not of TripAdvisor LLC
kevinlN7068RI
Province of Alicante, Spain
1512
Reviewed 31 August 2019 via mobile
€68 for a shower

I booked this hotel for myself and my husband after looking online. The pictures looked good. On arrival we checked in but where taken away from the hotel to an apartment block around the corner that was also part of the hotel yet separate. We were shown the room and without doing a full inspection we said fine, we were only staying one night after being sightseeing in Malaga. I needed a shower so went straight in. It was beyond basic with just a horrible shower curtain to pull around the square shower tray. I was already showering when I realised it wasn't clean but by then I was wet and had to use one towel to dry myself and a smaller one to wipe the small flood that had happened due to the curtain not really being sufficient in keeping the water contained within the shower area. My husband came in to inspect and discovered mould on the grouting and shower drain and cracked tiles, dirty. We also discovered mould inside the fridge door. He went to complain and the gentleman who checked us in came to look and apologised and went to see if we could have another room. On his return he brought a lady with him and she brought bleach to clean as there were no other rooms available. We weren't happy and said we wanted to check out. €68 for a shower was the cost of me not doing a full inspection on a so called 3 star hotel. I was not aware I had to. The manager, who did not speak English told the gentleman she would not refund as i took a shower and used 2 towels. We offered to pay for the shower but she refused. This was exceptionally short sighted of her as we would have paid her a small amount and left, end of story. Now we are pursuing this through a well known online booking company. I have never had such treatment and if you book this hotel then do a full inspection and don't make the same mistake I made as it cost me. However, in my opinion you can do a lot better than this so look for another place to stay.

First of all, we thank you for your trust in our services, especially for having taken the time to share your opinion after your stay in our Hotel.
We are sorry to read your comments about all the issues you mentioned. Our only aim is try to do our best in all areas, and not being able to fulfill your complete satisfaction, for us, is a way of knowing that we must pay more attention to details. That is why, we kindly ask for your apologies.

Report response as inappropriateThank you. We appreciate your input.
This response is the subjective opinion of the management representative and not of TripAdvisor LLC
View more reviews
PreviousNext
12…41