US$145
US$95
View deal
SAVE US$50
Hotels.comUS$120
PricelineUS$129
Trip.comUS$145
View all 16 deals
Prices are provided by our partners, and reflect nightly room rates, including all taxes and fees known to our partners. Please see our partners for more details.
Payments made by partners impact the order of prices displayed. Room types may vary.
Radio9phs
State College, Pennsylvania
197101

Up on the hill above town with an excellent view. This location puts you close to Chez Manú restaurant, highly recommended, but pretty far from the town center where most of the restaurants and all of the shopping is. $AR 300 taxi ride to down town, but there is free shuttle from the hotel every two hours in the afternoon. Breakfast pretty good, probably 4 stars. Room quality is a little run down. Our room smelled a bit, maybe due to a drain in the bathroom floor, but we’re not that picky. We tried to order box lunches the night before an early morning excursion departure, but the staff dropped the ball, had to snatch some things from the breakfast buffet. If I came to Ushuaia again I would probably try to stay in town just for convenience, even if the room quality was less than this. More

Thank you for choosing Los Acebos Ushuaia Hotel! We are glad to know you had a nice stay with us enjoying the beautiful views of Begle Channel.
We are sorry for the mistake with the box lunches. We take full responsability for that and of course we understand any feeling of disconformity.
Hope you had pleasant journey home.
Kind Regards,
Natalia Imhoff
Supervisor

Report response as inappropriateThank you. We appreciate your input.
This response is the subjective opinion of the management representative and not of TripAdvisor LLC
See all 803 reviews
Payments made by partners impact the order of prices displayed. Room types may vary.
Nearby Hotels 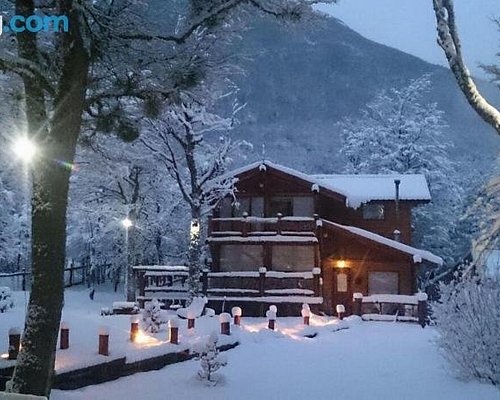 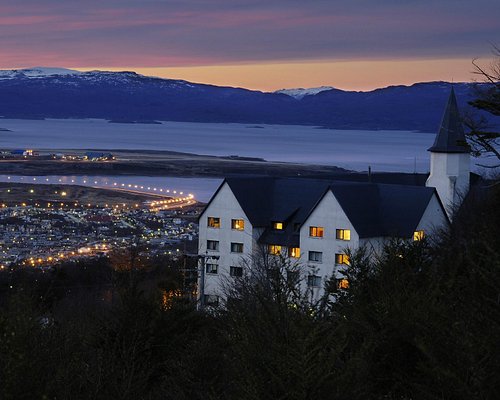 We stayed for one night prior to embarking for Antarctica. Hotel full with similar guests. Comfortable, very clean room with bath. First class steak at dinner. Good tapas style lunch.

It is on a hill overlooking the city and harbour. Beautiful views.

Dear vernviper,
Thank you for choosing Los Acebos Ushuaia Hotel!
We are happy to know you had a wonderful stay with us enjoying the beautiful views of Beagle Channel. Hope you have a good time in Antarctica. Kind Regards.

Report response as inappropriateThank you. We appreciate your input.
This response is the subjective opinion of the management representative and not of TripAdvisor LLC
jazzer03
London, United Kingdom
2735
Reviewed 15 February 2020
The hotel at the end of the universe

Oh my God, the views. They are spectacular. This is a cosy hotel set high up above Ushuaia with amazing views over the town, the port and the Beagle Channel.

The rooms are spacious with two king size beds. Bathrooms also spacious, with nice large pump bottles of organic shampoo and body lotion. The rooms are not luxurious but with views like that, who cares?

Had dinner in the bar both nights, very good tapas. Lovely to sit there with a glass of Malbec and watch the sky turn various shades of pink and the sun set. Absolutely beautiful.

Dear jazzer03,
Thank you for taking the time to share your comments regarding your recent stay at Los Acebos Ushuaia Hotel!
We are glad to know you had a pleasant experience with us and we appreciate your valuable feedback about views, rooms and amenities as well as the services and food we offer.
It will be a pleasure to welcoming you soon!
Regards,

Report response as inappropriateThank you. We appreciate your input.
This response is the subjective opinion of the management representative and not of TripAdvisor LLC
garyjduffy
Cork, Ireland
2849
Reviewed 11 February 2020 via mobile
3 star at best

Can't understand why SAT put us here. In Ushuaia you need to stay downtown. Staff here were the least trained of all the hotels we visited in a 33 day trip. The restaurant is a barn...we used it for a mediocre breakfast only....tubular steel furniture....staff asleep....Notices about how they care for the environment are a joke....no stoppers in the sinks, no curtains in the bathroom, unnecessary heating on everywhere. Awful service except for shuttle to town. Absolutely no other redeeming features!

Dear garyjduffy,
Thank you for choosing Los Acebos Ushuaia Hotel!
We regret that your experience in our hotel did not meet the standard of your expectations.
Our hotel is located within the Tourist Reserve on the way to the Martial Glacier, immersed in an exclusive natural environment where people can enjoy nature and beautiful views from Beagle Channel. Perhaps this hotel is not the right place for people who prefer the city.
On the other hand our staff is very well trained for their jobs and always outstanding so we regret thay you do not personally perceived it.
We hope you had a pleasant journey home.
Regards,
Natalia Imhoff
Supervisor

Report response as inappropriateThank you. We appreciate your input.
This response is the subjective opinion of the management representative and not of TripAdvisor LLC
francescodU9533XH
Modena, Italy
1623
Reviewed 19 January 2020 via mobile
Bellissimo-the best in Ushuaia

Fantastic hotel, very comfortable and cozy.
The bar and the restaurant are wonderful.
Rooms are very nice, with big bathroom and two king size beds
The view from the room is breathtaking!
The best you can find in Ushuaia

Thank you for taking the time to leave your very positive comments regarding your recent stay at Los Acebos Ushuaia Hotel! We are very happy to know you appreciated the attention that we provided to you as well as the services, facilities, beautiful views and relaxing atmosphere.
Thank you for recommending us further. Hope you visit us next time!

Report response as inappropriateThank you. We appreciate your input.
This response is the subjective opinion of the management representative and not of TripAdvisor LLC
Verulam
United Kingdom
177135
Reviewed 15 January 2020
Some good features, particularly the food, but confirm your reservation.

This large hotel is set back from, and high above,Ushuaia, with great views over the town and the Beagle Channel. We arrived as part of a tour party of 6 people, to find total confusion at the front desk. The receptionist could find no record of the reservation for myself and my wife, and was unclear how the rooms should be allocated among the others (he couldn’t speak English at this point, but totally recovered the ability to do so later in the evening!). It took half an hour to sort out, but eventually a room was found for us. I thought the problem might have been the fault of the tour operator’s local agent (the tour guide was with us, but useless in resolving the problem), but after a later investigation, I was assured there had been a confirmed reservation, which the hotel lost.

We were there one night. Our room was large and comfortable, but it was on the lowest floor (Floor -1). While it was facing over the town and the water, trees largely blocked the view. After a poor start, however, we did discover an outstanding feature of the hotel, and that was dinner in the hotel restaurant. We had a superb meal, one of the best on our South American tour, with the king crab particularly recommended. Breakfast was also good, as was the service in the restaurant.

If you do stay here, and it could be worth it for the food, double-check your reservation in advance to avoid the problem we had.

Thank you for choosing Los Acebos Ushuaia Hotel!
We apologize for the inconvenience caused at check in time. We have checked your booking with reservation department and the confirmed us that there was an error while procesing the reservation so indeed a room was mising for your party of six people. Fortunately the inconvenience was resolved as soon as we could.

On the other hand, we are glad to know you had enjoy the beautiful views of Beagle Channel and our gastronomic proposal at Orange Restaurant. Thank you very much for highlighting this point and leaving us very positive comments about.
Hope you had a pleasant journey home. Regards,

Report response as inappropriateThank you. We appreciate your input.
This response is the subjective opinion of the management representative and not of TripAdvisor LLC
View more reviews
PreviousNext
123…134