US$152
US$72
View deal
TravelocityUS$152
CheapTicketsUS$152
Orbitz.comUS$152
View all 13 deals
Prices are provided by our partners, and reflect nightly room rates, including all taxes and fees known to our partners. Please see our partners for more details.
Payments made by partners impact the order of prices displayed. Room types may vary.
Maureen S
Darwin, Australia
300160

The hotel was booked through Quark Expeditions prior to boarding our expedition ship to Antarctica. We stayed two nights, the room being very small and dated with limited space for our luggage. The bathroom was small with no shelves for the toilettes. The bed lights were very dim.

Luckily the lounge area was spacious with great views of the town centre and harbour. Location was only a short walk into the town centre. The reception girl was very friendly and helpful but the male person who had the afternoon shift was not helpful at all when we requested a power adapter for the internet. Luckily the girl was on next morning and gave us the adapter without any problem.

The restaurant does not open until 8 pm. The food was quite good but slow service. The breakfast was basic with no cooked food.

Show less
See all 802 reviews
Payments made by partners impact the order of prices displayed. Room types may vary.
Nearby Hotels 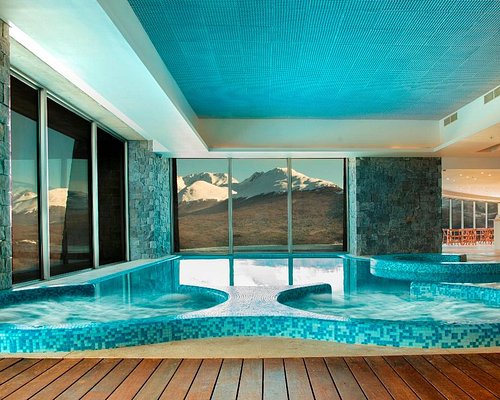 Expedia.com
View deal
Free cancellation
Pay up to 12X
Hotels.com
US$178
Booking.com
US$178
Hurb
US$188
View all 16 deals from US$178
270 reviews
3.8 km from Hotel Las Lengas
We compared the lowest prices from 16 websites
Breakfast included
Hosteria y Restaurante America
US$76

I stayed here for one night before my trip to Antarctica. I found the room a bit run down, and in need of some work. The public areas looked much more modern. The staff were nice enough, but the restaurant staff were very slow and did well at avoiding people trying to get their attention. It took me about half an hour to get their attention for a drink when they would walk only 1 table away from me after delivering people their meals. The breakfast was reasonable, but I am not sure I would return here.

This review is the subjective opinion of a TripAdvisor member and not of TripAdvisor LLC
gustav2011
Louisville, Colorado
747191
Reviewed 15 March 2020 via mobile
Cruise night before

This hotel was pretty dismal. The room was incredibly small and barely room for luggage, walls were thin and you could hear conversation as if you were in the same room. The bathroom door didn’t close totally, the room was very hot and the shower head was horrible. I wouldn’t stay more than a night. Also if you are on the second floor you must carry luggage up stairs. Okay for one night only barely.

This review is the subjective opinion of a TripAdvisor member and not of TripAdvisor LLC
elisakissinger
Spokane, Washington
51
Reviewed 22 February 2020
Poor service and rude front desk staff

I was traveling on the Ocean Diamond Expedition ship and I stayed at this hotel two nights before boarding the ship. This is one of the ships that Quark Expedition uses for their guests upon arriving in Aruishia and before departing for the ship.

The hotel has a beautiful lobby and beautiful view if the island and that is about it. The front desk person was extremely rude to me then I asked for towels, he did not believe me when I told him there were no drinking glasses in the room and was upset that he had to fix a broken lightbulb in the room.

The next night, again the same rude staff person was upset when I asked him for towels and did not want to give me the information I needed for the ship, even though this hotel is used by Quark Expedition.

Quark Expedition uses four hotels in Aruishia, and this hotel should not be one of them.

This review is the subjective opinion of a TripAdvisor member and not of TripAdvisor LLC
S1mpA
Oslo, Norway
3312
Reviewed 17 February 2020 via mobile
3 stars for 3 star hotel

Rooms are clean, but a bit tired and dated. Shower was poor, but otherwise bathroom was ok. Reasonably priced rates and an ok location for the main street in Ushuaia. Breakfast and restaurant were poor. Service was pleasant. All in all just a very average hotel.

This review is the subjective opinion of a TripAdvisor member and not of TripAdvisor LLC
susiem447
Ezeiza, Argentina
12718
Reviewed 13 February 2020
Arranged with our expedition

Our rooms were arranged with our expedition to South Georgia and Antarctica. I don't have much to compare it to in terms of other hotels in Ushuaia. Breakfast was mediocre with cool coffee. Rooms were fine and quiet. Location up on hill had nice view and we were able to walk to downtown.