Gorgeous setting, very nice staff. We got two spots for our RV so had plenty of space ( although only paid for 1) and set along the creek. About 10 miles into Sedona or Cottonwood. Very dry and dusty soil so bring shoes you don’t mind getting dirty.

Trip type: Travelled with family
See all 241 reviews
Payments made by partners impact the order of prices displayed. Room types may vary.
Nearby Hotels 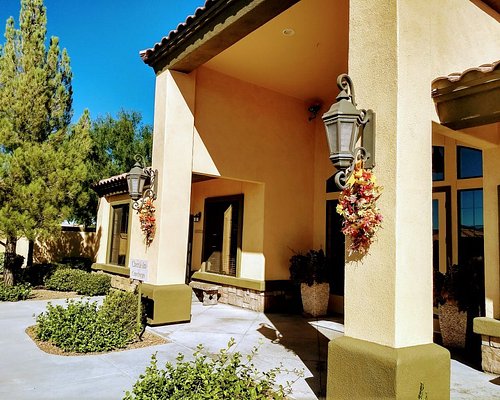 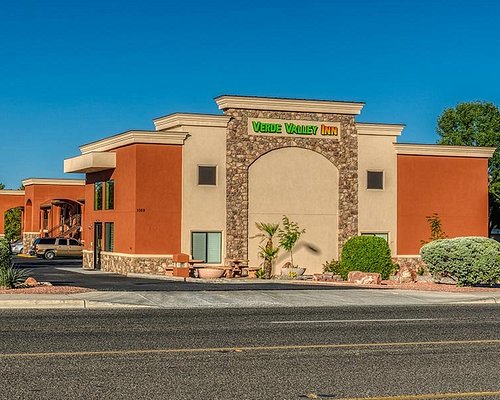 Verde Valley Inn
US$135
Booking.com
View deal
Free cancellation
Reserve now, pay at stay
Priceline
US$135
eDreams
US$135
Agoda.com
US$135
View all 14 deals from US$135
62 reviews
11.1 km from Lo Lo Mai Springs
We compared the lowest prices from 14 websites

Little camp village that has spaces for large RVs to tents with a variety of hookup options. A 15 minute drive south of Sedona nestled in a valley filled with trees and a creek. It’s very clean with several amenities kids will love: swim pool, basketball hoop, bridges and trails. Camp spots have concrete pad, picnic table, fire pits, and there are public restrooms with showers, dish wash station and ice & firewood for sale. It’s more quaint than 4-star so don’t be put off by the algae filled pond, sparse WiFi, quiet hours and rules for dogs. Someone had to direct us into the tight spot between 2 huge trees and road with protruding tree limbs. It feels isolated and calm and the trees give needed shade in this area. We liked it but set your expectations accordingly.

This review is the subjective opinion of a TripAdvisor member and not of TripAdvisor LLC
LoveTravel624305
Dallas, Texas
12
Reviewed 31 March 2021
The worst customer service experience of my life!

This park only takes phone reservations. The reservation agent wrote down the wrong month for my trip - the right days, but the wrong month. They emailed me the confirmation at 7:01 on March 17th, I responded to the email confirmation the next morning at 10:17 by email. When I didn't get a response, I called a couple of days later b/c I wanted to make sure we had the correct dates. I was told they didn't have the correct dates available and since the booking was so close to the travel time I had to pay the full amount as a cancelation fee. I told them that was not acceptable and would need to speak to a manager. Someone else called me back and said I could go on a wait list for the April dates, but if I didn't get in that I would still pay a cancellation fee. I said not acceptable and again asked to speak to the manager. I received an email from the resort cancelling my booking and charging me the entire $300. I emailed them the support for my responses about cancelling the next morning and still heard nothing. I called again and asked to speak to the manager and was told that he was “too busy” to talk to me, had given me an offer and since I didn’t take it, I would just be charged the full amount. Then we were somehow “disconnected”, but giving them the benefit of doubt, I called back and said, we were disconnected and that I really needed to speak to the manager. At this point, I was very frustrated and forceful. They hung up on me again still never giving me a chance to speak to the manager. I cannot imagine why any company would treat a potential customer in this manner. Most people in this industry are so enjoyable and welcoming, but the team at Lo Lo Mai is awful. I know there aren’t a lot of parks near Sedona, so I guess they get away with treating people like this, but please be warned.

This review is the subjective opinion of a TripAdvisor member and not of TripAdvisor LLC
AliCarlson
Jacksonville, Florida
11
Reviewed 7 February 2021 via mobile
Not honorable

I am writing this cautionary tale for anyone considering staying at this RV Park. We asked again and again if this campground and the space they were placing us was suitable for our Vanleigh Beacon 5th Wheel and again and again we were assured it was. The manager on duty, with all certainty, said not to worry, he would guide us into the spot and that he does this all day long. He backed us right into a tree, causing over $1,000 in damage. He then moved us to a space that would accommodate our rig and assured us that they would take care of the damage and called an RV repair company, who removed the awning and told us we would need to order a new one. We researched the cost to make repairs and conveyed this to the manager who had now decided this was our fault and would not be paying for the repairs. After some discussion, he decided he was willing to pay half of the cost. He will not return our calls, leaving us to pay the full cost of the repairs. In addition to not honoring his word, it was disturbing the way he handled the situation. It was clear to us that he did an about face after talking with other members of the staff (this is a family run business). He claimed we lied on the form about the length of our rig - which we did not - and that was his reason for not following through with his agreement to reimburse us for the damage he caused. We pointed out that it was the height, not the length of the rig which was the reason for the damage and that it would make no sense for us to lie and that we were the ones asking about the size of the space. If he had any question about the length of the rig not matching up on their paperwork, he had multiple opportunities to bring this up when we questioned whether or not the assigned space was suitable for the rig.

The place is absolutely beautiful. But the staff on the phone, are RUDE not friendly at all. They sound like they don't like working there. This reflects big on them. How about getting people that are nice over the phone, and have some actual customer service experience..

This review is the subjective opinion of a TripAdvisor member and not of TripAdvisor LLC
annlF6696RR
12
Reviewed 21 September 2020
Great location but........

Great Place! Nice location. Beautiful scenery. Clean showers and restrooms.We did have some problems with our campsite. We had some big roots sticking up and kept tripping over them. We were not given options to move.. The dumpsite road needs to be wider so that other RV's could pass thru. Customer service could be improved.

This review is the subjective opinion of a TripAdvisor member and not of TripAdvisor LLC
View more reviews
PreviousNext
123…41
<script type='text/javascript' crossorigin='anonymous' async onerror='__scriptLoadError(this,true);' src='http