This is not the place - Review of GPRO Dongyi Huangshan Hotel

GPRO Dongyi Huangshan Hotel
GPRO Dongyi Huangshan Hotel
Lowest prices for your stay
Lock in the lowest price from these sites
US$45
US$40
Free cancellation until 01/10/21
Reserve now, pay at stay
View deal
PricelineUS$45
eDreamsUS$40
TripadvisorUS$40
Expedia.com
Travelocity
Orbitz.com
View all 8 deals
Prices are provided by our partners, and reflect nightly room rates, including all taxes and fees known to our partners. Please see our partners for more details.
Payments made by partners impact the order of prices displayed. Room types may vary.
Juuso Ä
Espoo, Finland
5160

This is not the place

I wonder what "5 stars" means, closer to 2.
No one speaks english, but they can afford to laugh at you if you try to speak chinese. The room is dirty and food is just average.
Very unpleasant visit. Try to avoid it.

Trip type: Travelled with family
See all 36 reviews
Payments made by partners impact the order of prices displayed. Room types may vary.
Nearby Hotels 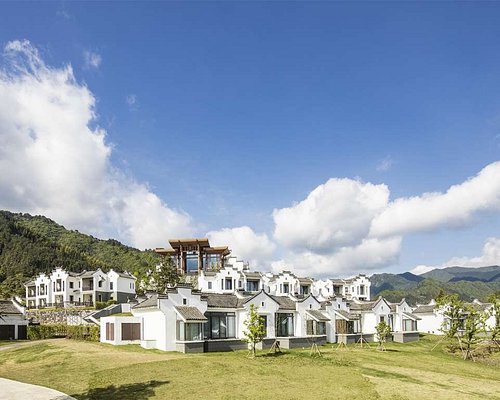 Top Rated
Banyan Tree Huangshan
US$515
Booking.com
View deal
Trip.com
US$495
eDreams
US$515
Priceline
US$515
View all 13 deals from US$495
1,909 reviews
20.8 km from GPRO Dongyi Huangshan Hotel
We compared the lowest prices from 13 websites 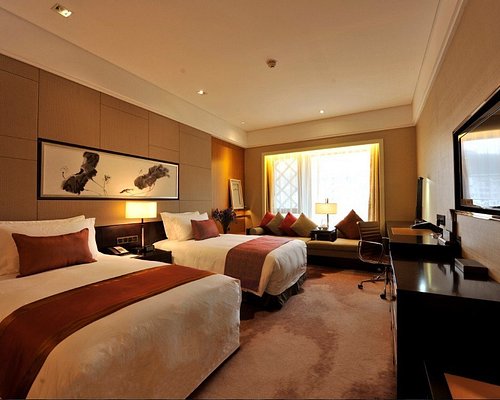 Crowne Plaza Huangshan Yucheng, an IHG hotel
US$134
US$132

Expedia.com
View deal
Free cancellation
Pay up to 12X
Trip.com
US$72
Hotels.com
US$108
Booking.com
US$92
View all 13 deals from US$72
123 reviews
1.3 km from GPRO Dongyi Huangshan Hotel
We compared the lowest prices from 13 websites
Breakfast included
Hui Boutique Hotel
US$63

Expedia.com
View deal
Free cancellation
Pay up to 12X
Hotels.com
US$122
Trip.com
US$79
CheapTickets
US$122
View all 11 deals from US$79
40 reviews
1.0 km from GPRO Dongyi Huangshan Hotel
We compared the lowest prices from 11 websites
Breakfast included
Libre Resorts Huangshan
US$105

Stayed at the hotel for three days and two nights with ten other friends in three double bed and five single bed rooms. The room size was the size for both types and the price similar, ie you split the cost if you have two persons staying in it. Most of us are happy with the room as they were rather spacious and clean. The location was good as it is practically the last hotel at the base of Mt Huangshan before you enter it. Had the opportunity to run around the hotel area. If you turn left of the hotel, you get to see the entrance gate of the mountain, some landmark monuments and tourism office. Turn right, you can visit the local market and shops and restaurants. Took some really nice shots of the village with the mountain in the background. The breakfast for me was good as it had hot noodle soup with Chinese condiments to be added. Spread was ok although the service could be better. Got locked out of my room one day as the card didn't work but the room service had it sorted out rather quickly. All in all, a comfortable stay with nice clean room and nice external environment.

This review is the subjective opinion of a Tripadvisor member and not of TripAdvisor LLC.
Tedstravelblogs
Vancouver, Canada
360897
Reviewed 19 April 2014
The best of a poor choice

Chinese five star hotels are, at best, three stars elsewhere and this one is no exception, however it’s probably as good as it gets in Tungkou / Tangkouzhen.
Our ‘mountain view’ room might have had a view if the windows had not been fogged and the dismal lighting just seemed to add to the gloom which was probably a benefit because it made the very grubby carpet difficult to see.
Also there are no such things as non-smoking rooms in Chinese hotels so get used to the smell. There are no English language TV channels and whilst our mini bar fridge was well stocked it didn’t work.
Our twin room was otherwise comfortable and adequate for a short stay and most other things worked as expected including the plumbing which was a pleasant surprise. The WiFi worked very well and the buffet breakfast was extremely good.
The staff were friendly and very helpful but they have little English language. Apart from breakfast the hotel restaurant was also satisfactory for other meals.
The only reason for staying at Tungkou is Huangshan and this hotel is a good base from which to visit the mountain – being the last stop before entering the mountain precinct.
The hotel has a very helpful tour desk however, once again, it’s Chinese only but you could probably fumble through with English if you’re tolerant and your needs aren’t too complex. There is one other ‘five star’ hotel in town which looks about the same from the outside so it probably is and the rest looked downright seedy.
The SHJ Hotel is not a paradise but we slept comfortably for our few nights, the staff were pleasant, the tariff was moderate and we will shake off the cigarette smell eventually.

The rooms were clean, warm and cozy. The ordered airportshuttle picked us up and brought us savely to the hotel (260RMB). Just a very few staff members speak English. Take a king-size room on the 6th floor. Breakfast with huge buffet. Western & Chinese dishes.

The hotel's driver will bring you to the local bus station from where the buses up to the mountain area leave. (5RMB p.P)

The restaurant in the hotel is a huge challenge. Insist to get the "real" Chinese menu which comes in a book like menu! They will not give it to you so easily (Don't ask me why). Observe the menu Chinese guest get and use google translate to understand the menu. They have nice dumblings, noodles, mushrooms and some wired specialities, like tendons, that you don't necessarily need to try.The western options and the western Chinese options are NOT good and boring.

This review is the subjective opinion of a Tripadvisor member and not of TripAdvisor LLC.
Pedig_1791
London, United Kingdom
3520
Reviewed 26 May 2013
Recommened for Tangkou

I've no idea why there is a picture of Super 8 for this hotel; I'm not sure that they have anything to do with this hotel group.

Anyway, the hotel was more than adequate for our needs. A comfortable hotel with a comfortable room; it was nothing special but for the price we paid, I considered it good value for money. We found the staff to be friendly and helpful. There was one person on reception that could speak some English but as we can speak Chinese, communication was less of a problem. One gave us the tip: on the bus back from the Huangshan, tell the driver that you are staying here and they will stop nearby.

We ate in the hotel restuarant twice and the (Chinese) food was pretty good with English translations for some of the dishes.

@Travelling-couple999; i'm sure you will have noticed on the mountain that 99.99% of the tourists are Chinese. This probably helps explain why few of the staff can speak English. That's why you have a guide. Also, I'm sorry that you found out the hard way that a five star hotel in China is not the same as one elsewhere unless it is part of an international chain.

Room tip: Go for a room with a view of the mountain
Ask Pedig_1791 about GPRO Dongyi Huangshan Hotel
Thank Pedig_1791

This review is the subjective opinion of a Tripadvisor member and not of TripAdvisor LLC.
Travelling-couple999
Australia
710
Reviewed 8 November 2012
DO NOTstay here

Our tour agency pre-booked a 3 star hotel here, we read the reviews and they were terrible so we decided to book something ourselves. This hotel is allegedly a 5 star hotel and good price so we booked it. It wouldn't meet a 3 star by western standards. No staff speak english, reception staff are rude and we would have been lost if it wasn't for our guide who could translate. Our guide helped us to pre-order dinner from the restaurant, which came to our room that evening. Two waitresses came with 2 trays and one waitress accidentally dropped her tray on the floor in our room, the containers of sauce- ketchup and brown sauce were all in the carpet. She was embarrassed but we didn't say anything as we didn't want to make her feel bad. She cleared a bit of the mess and left the room. We sat waiting for 20 minutes with the mess on the floor until one came back with new sauce and cutlery. The mess still on the floor. We signalled that someone needed to clear it up, as they hadn't yet ordered housekeeping! Housekeeping eventually came and cleared some of it up.

The next morning in reception, our tour guide met us and said that WE needed to pay 100 RMB as we had spilt food on the carpet. Of course we were furious and insisted to speak to the manager who gave a feeble apology, and said that the worker must have lied.

I also prepared some clothes to go for same day laundry, I filled in the form and put the clothes in the hotel laundry bag. I explained to the guide that we need laundry done today. Reception asked me to bring down the laundry. I went to the room and got the bag and brought it back down to reception. The reception lady called over a housekeeping lady who took the bag and was starting to tip the bag upside down on the reception counter to count my laundry items. I couldn't believe such a thing! I shouted that no one needs to look at and count my underwear in the middle of the reception! She took the bag and counted around the corner. Yeah this is really 5 star service! Not!

After our tour that day the manager sent his apologies by sending some fruit to the room. That acknowledged that they took our complaint seriously, but still we would never reccomend this hotel. Of you want service, go somewhere else!