US$21
US$18
View deal
eDreamsUS$21
Trip.comUS$20
StayForLong
View all 8 deals
Payments made by partners impact the order of prices displayed. Room types may vary.
Prices are provided by our partners, and reflect nightly room rates, including all taxes and fees known to our partners. Please see our partners for more details.
devecchibarbara
3849

Good breakfast with good options (6:30 till 10am). The room is big (deluxe) and looks like the pictures (site booking) and has fridge. It was clean. We stayed for 3 days. When we did the check in on February 4th the staff was super friendly. Didn’t happen during check out because we asked to leave the car after noon - check out time - because we had a excursion on “Cristo Redentor” and the attendant said no. Even offering to pay another day to leave the car couple hours more he said that the check out is noon. We didn’t understand what was the problem thinking that the check in was at 2pm and was Thursday, the hotel wasn’t full...but anyway, depend what expectations you have. If you have a short vacay like us is fine. Has a good location for bars, drugstore, music - Lapa. More

Show less
Trip type: Travelled as a couple
See all 169 reviews
Payments made by partners impact the order of prices displayed. Room types may vary.
Nearby Hotels 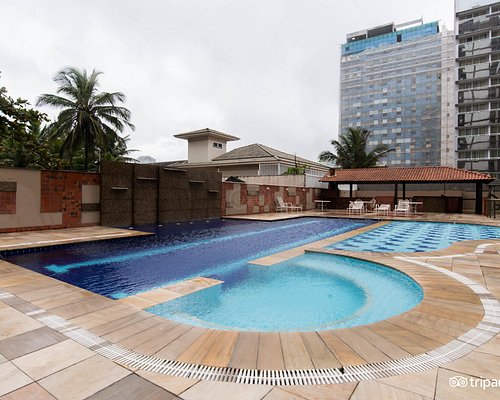 Expedia.com
View deal
Pay up to 12X
Priceline
US$57
Booking.com
US$57
Travelocity
US$57
View all 12 deals from US$57
243 reviews
5.5 km from Hotel Pouso Real
We compared the lowest prices from 12 websites
Cliffside - Guest House & Experience
US$314

Expedia.com
View deal
Hotels.com
US$295
Travelocity
US$295
Orbitz.com
US$295
View all 9 deals from US$295
53 reviews
15.7 km from Hotel Pouso Real
We compared the lowest prices from 9 websites
Breakfast included
Casa Cool Beans B&B

I stayed here first at the end of December through the new year period. Given that prices in Rio were at a premium, realistically this was the best I could get without breaking the bank. Everything in Copacabana, Ipanema and Leblon was several hundred euros per night. I wasn't expecting much, but I was surprised/pleased for the money and came back to stay there again 10 days later for a single night.

The area that it is in (Lapa) is rather run down looking, but has some bit of character to it. It gets lively at night. You do have "ladies of the night" etc. hanging around near the hotel door way and the parking garage next door, but just ignore them and walk by. They don't hassle people.

Near the hotel you have a few ok bars/restaurants with outdoor seating area within a 100 metre walk. Go out the hotel turn right then right again into the square (Praça João Pessoa) and they are all there, with more up along Avenida Av. Mem de Sá which cuts through the square up to the Lapa arches (aqueduct).

The hotel rooms are old and rather dated looking so don't expect luxury here. The air-conditioning units are old fashioned and very noisy and really should be replaced with newer quieter ones. Rooms have refrigerators, but they don't seem to chill down things very well. Bring toiletries as all they supply is a small bar of soap. Breakfast is basic, scrambled egg, strange meat that changes daily, varying from frankfurter sausages to chicken nuggets, plus a selection of ham, cheeses and cakes. Nothing spectacular really.

The staff are helpful but most have little or no English, except for one of the doormen who has fluent English. He is generally on in mornings up to lunch time. Ask him about sightseeing tours, location of shops and ATM etc. He'll also give you practical advice for traveling around the area.

The general area is fine to walk around during daylight hours without any problems, there is a good police presence there. However, exercise caution at the top of the Selaron stairs as muggings are common there. The area east of Carioca metro station is deserted at weekends and best avoided. On any day do not wander around the streets of Lapa or Centro at night with the exception of the restaurant/bar area that I mentioned previously. For anywhere beyond that or for dining areas in Centro, flag down a yellow taxi (they're very plentiful outside this hotel) or else use Uber.

This review is the subjective opinion of a Tripadvisor member and not of TripAdvisor LLC.
beesleyism
Windsor, United Kingdom
43
Reviewed 27 August 2016
Simple but Does the Job

We stayed during the Olympics in Aug 2016 at a vastly inflated price created by the tour company.

This hotel is a basic 2 star.
Breakfast- basic - mainly breads and cakes with scrambled eggs and a daily guest meat (chicken nuggets one day).

Rooms- ours was quiet but you're in the middle of a busy district (similar to North Shoreditch in London) so there's noise outside a lot of the rooms. Rooms are kept clean and maids are lovely and helpful. There's a fridge and a supermarket up the road.

Lobby staff- really helpful. One guy speaks fantastic english and they are happy to hail you a cab- can't fault them.

Area - please remember that the price (the regular price, not what we paid) reflects the area. Lappa is vibrant and you will see trans-gender prostitutes outside touting for business, and people party and drink in the street 24/7. You don't quite feel safe if you're alone and female at night, but it's a city so you can't expect to You're more likely to get pick pocketed on the beach.

The bar on the corner if you come out of the hotel and turn right then right are really nice.

You get what you pay for and Lappa in a manic area.

This review is the subjective opinion of a Tripadvisor member and not of TripAdvisor LLC.
Eduardo B
25
Reviewed 19 November 2014 via mobile
Deception

I expected for a best experience, considering the excellent localization of this hotel in the center of the Rio, but is a very old hotel (in bad sense). I too stayed in better hotels in the Center and with better rooms. Example, the bathroom stinks every night and the breakfast is really simple. Whatever, the location is awesome, because is close by Lapa (where night life happens) and you can easily go to Copacabana, Ipanema, Leblon... using public transport.

This review is the subjective opinion of a Tripadvisor member and not of TripAdvisor LLC.
Cesar Z
El Paso, Texas, Usa
425
Reviewed 11 July 2014
Hotel Pouso Real a Hostel: not a hotel

I was sold this hotel by Expedia as a Three Star Hotel, and paid $240.00 a night for it, but only stayed one night (the night we arrived, when we had driven from Belo Horizonte and were very tired), but left it immediately the next day. Pouso Real is not a hotel it is a hostel, and as that is not that bad, but I'm not 18, and don't stay in hostel, let alone hostels that cost $240.00 Dollars a a night. Additionally, the hotel is in the seediest part of town: it had women selling their bodies right outside the hotel, and the hotel is actually in a very narrow street surrounded by hotels that charge you by every half an hour, due to the before mentioned sellers.

Room tip: Don't stay at this hotel, unless you're doing a documentary on the seedy nightlife of Rio de Janeiro.
Ask Cesar Z about Hotel Pouso Real
Thank Cesar Z

This review is the subjective opinion of a Tripadvisor member and not of TripAdvisor LLC.
John F
Edinburgh, United Kingdom
4041
Reviewed 4 July 2014
Not a nice hotel

Location is right next to the Lapa area which gets very busy at night. My window didn't close properly and the noise was pretty much constant. Cars were tooting constantly, even at 4 am. The corner 20 yards from the hotel usually has at least half a dozen "working" girls looking for customers. Reception couldn't seem to work the credit card machine properly. Caused me a lot of hassle. I paid 547 real a night for a very average room. Complimentary toiletries consisted of a small sliver of soap. There was a fridge but it was completely empty. Breakfast was very poor. No cereal. Some mornings the only hot option was cheese dough balls. WiFi was useless.