A disappointing, rather dated hotel - Review of Bristol Evidence Hotel

US$53
US$42
View deal
Hotels.comUS$46
TravelocityUS$46
PricelineUS$53
View all 13 deals
Prices are provided by our partners, and reflect nightly room rates, including all taxes and fees known to our partners. Please see our partners for more details.
Payments made by partners impact the order of prices displayed. Room types may vary.
cinclus2016
Barnet, United Kingdom
4050

A disappointing, rather dated hotel

A rather disappointing experience, all things considered, though in it's favour, the staff did their best to be helpful, friendly, and to communicate with us in English. The WiFi was also decent.

My room consisted of two single beds, on which the mattresses were certainly due for replacement, whilst the sheets were hard and had clearly been around for countless years.

The shower in the bathroom was of the like you might find in a school gymnasium: a fixed head, that yielded lukewarm water in a stream rather than a spray, and with water pressure that was erratic. The towels were hard, and of the cheapest variety you could have have found.

I didn't have to spend a lot of time in the room, which, to its credit, was generously-proportioned, but I never did get the television set to work...

Although I was there for two nights, my room wasn't refreshed.

The breakfast was reasonable, though they did seem to have a problem with ants in the dining room.

Finally, the process of checking in and checking out was painfully slow. Indeed, it was quicker to get through immigration!

I don't like to be negative, but I can't really recommend this establishment.More

Show less
Room tip: It would be worth requesting a room on a high floor due to the traffic outside
See all 414 reviews
Payments made by partners impact the order of prices displayed. Room types may vary.
Nearby Hotels 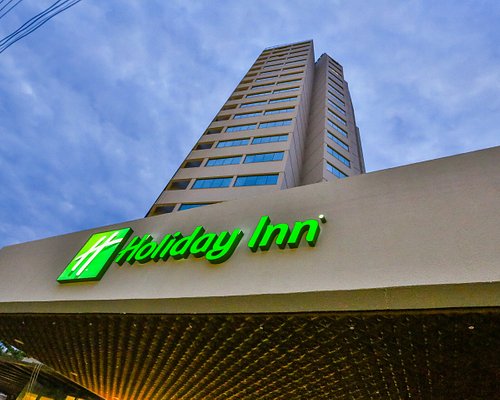 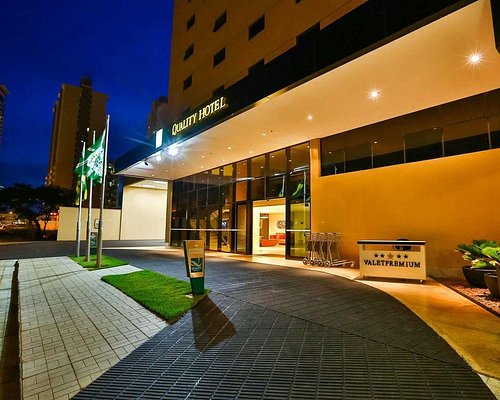 eDreams
View deal
Expedia.com
US$58
Trip.com
US$39
Booking.com
US$64
View all 14 deals from US$39
1,860 reviews
2.1 km from Bristol Evidence Hotel
We compared the lowest prices from 14 websites
Top Rated
Sponsored
Holiday Inn Goiania
US$44

eDreams
View deal
Expedia.com
US$37
Trip.com
US$30
Booking.com
US$49
View all 13 deals from US$30
2,333 reviews
4.2 km from Bristol Evidence Hotel
We compared the lowest prices from 13 websites
Breakfast included
Golden Lis Hotel Boutique

Located next to a beautiful park, the Bristol is also near several good restaurants (e.g., BBQ beef). There is a good gym and a decent-sized pool on the property, and a drugstore directly beside the hotel is convenient for picking up necessities and some food. The restaurant offers a great breakfast and the staff is friendly. The rooms are basic but nice enough (note: there are no ovens in the rooms, only microwaves, so if you are staying for a long time you will need to buy microwavable food). Best of all is the price - I booked a room on AirBnB for less than $800 CAD for an entire month!

Room tip: Be sure to ask for a room with a refrigerator and air conditioning.
Ask jonjon74 about Bristol Evidence Hotel
Thank jonjon74

This review is the subjective opinion of a TripAdvisor member and not of TripAdvisor LLC
David F
San Diego, California
2029
Reviewed 15 December 2015
Look nice on outside poor rooms on inside

We stayed one night after we arrived in brazil. Many mattresses are completely shot and old very soft uncomfortable beds. The bed sheet we had first night had somebody' else's hair on it YUK! Hotel has nice views and decent breakfast, but we changed to Hotel Maione around the corner which was much better for the same price.

This review is the subjective opinion of a TripAdvisor member and not of TripAdvisor LLC
Karl K
Sao Paulo, SP
7166
Reviewed 15 January 2015
Good value

Location is OK, next to the park. Facilities are simple but good, including the restaurant. Friendly staff. Room is spacious and clean, with a balcony, sitting area and kitchen. Nice view from the upper floors. Free parking. Free WiFi is fair to good.

The balcony is nice, but the parapet is low, definitely not recommended for children. The kitchenette is nice, but it is not useful because it is completely empty: no cups, plates, glasses or cutlery. Nothing.

This review is the subjective opinion of a TripAdvisor member and not of TripAdvisor LLC
lucy0629
335
Reviewed 9 January 2015
NICE!

My family (with two kids) and my parents stayed here in in January 2014. We enjoy our stay the apartments are big, the breakfast had a great variety. We also use the restaurant service for dinner. Um night the meat was not good, we complaint and they solved the problem right away. It right in front of a nice park for walks and activities with the kids.

This review is the subjective opinion of a TripAdvisor member and not of TripAdvisor LLC
Andres R
Guatemala City, Guatemala
65
Reviewed 24 October 2012
Good for the price

I stayed here on a business trip. The coffee was awful. The food overall was good, room service and in breakfast. We had to ask for cloth hangers and additional shampoo. Free wi-fi in all the hotel, but not so steady. Close to a park.