US$59
US$37
View deal
Free cancellation until 13/08/21
Booking.comUS$59
PricelineUS$59
TravelocityUS$54
View all 13 deals
Prices are provided by our partners, and reflect nightly room rates, including all taxes and fees known to our partners. Please see our partners for more details.
Payments made by partners impact the order of prices displayed. Room types may vary.
l0ba0c
Florianopolis, SC
425178

The idea of ​​setting up a modern capital in the midst of the backwoods of central Brazil began in the 1930s, led by our then president, Getúlio Vargas, who had the architect-architect Attilio Corrêa Lima, an important professional in the history of the development of Brazilian modernism and who elaborated the Goiânia pilot plan with the intention of making the State of Goiás the same as Belo Horizonte did for the State of Minas Gerais, "to expand markets on the periphery of capitalism by linking its new urban elites with the flows of capital."
The French influence is clearly noticeable in the geometry of the avenues, squares and aesthetic solutions of its Boulevares. Goiânia also draws attention to its afforestation consisting of parks and avenues parks interspersed with small lakes, in spite of its incredible and rapid growth bringing the problems inherent to it, it is a charming city to be visited, due to its intrinsic characteristics and the beautiful Country Club of Goiás, home of the tournament.
The Quality hotel Goiania, is located on “Jardim Goias”, a brand new planning area close to the Flamboyant shopping, where you can just walk around 10minutes to there and take advantage of lot of lovely restaurants.
Mr. Andre, housekeeping is fantastic and polite, as Ana Flávia, Jessica , Leidiane and Edileine at the hotel’s restaurant. In fact all the team are excellent, that's why, I RECOMMENDED IT !!!!More

I will repeat yours words to Andre, Ana, Jessica, Leidiane, Edileine. We all are very happy about it.
Thank you for writting your experience on Tripadvisor`s site.
We will be waiting for you again.
Best regards.
Roberto Ayres

Report response as inappropriateThank you. We appreciate your input.
This response is the subjective opinion of the management representative and not of TripAdvisor LLC
See all 623 reviews
Payments made by partners impact the order of prices displayed. Room types may vary.
Nearby Hotels 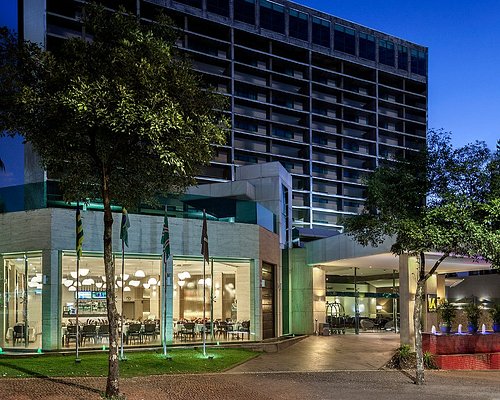 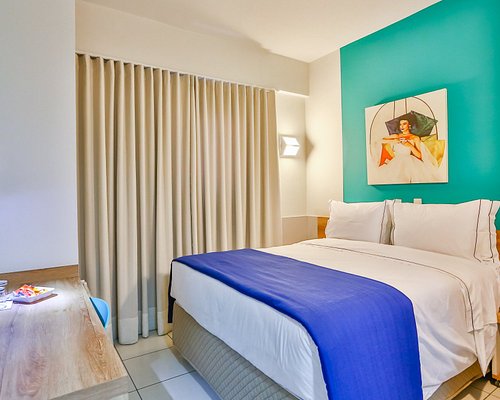 Expedia.com
View deal
Free cancellation
Reserve now, pay at stay
Booking.com
US$31
Hotels.com
US$29
Trip.com
US$46
View all 14 deals from US$29
391 reviews
4.0 km from Quality Hotel Flamboyant
We compared the lowest prices from 14 websites
Breakfast included
Comfort Suites Flamboyant
US$58

The hotel was just OK. My next trip to Goiania I will likely stay in a different hotel.
For it to stand out and get my business again, it needs to work out a few things:
1. The bathroom shower would not drain properly, as it was not leveled correctly during construction. It left a very bad impression since the hotel was built recently.
2. The hotel didn't have any power adapter to offer so I couldn't charge my computer. Very basic thing, every hotel I stayed in Brazil offered adapters.
3. I would suggest more

Review collected in partnership with this hotel
This business uses tools provided by Tripadvisor (or one of its official Review Collection Partners) to encourage and collect guest reviews, including this one.
Ask leandropimenta about Quality Hotel Flamboyant
Thank leandropimenta

Thank you so much for given us a feed back placed in Tripadvisor´s site. Sorry for the inconvenience. We are fixing the problem with the bathroom shower. Also we are very sorry about the adapters, We do have at the front desk, But could happened that, in this right moment they were all borrewed!! We have to buy some more.
Hope you give us another chance to prove that we are better than this moment.
Thank you so much.

Report response as inappropriateThank you. We appreciate your input.
This response is the subjective opinion of the management representative and not of TripAdvisor LLC
eugeniov735
Potenza
21
Reviewed 22 December 2017
The best hotel in Goiânia

Unbeatable hotel in quality comfort and price. The kitchen is to be improved and has all the features to do more.I will certainly return, and I will not need to find anything else. Thank you for the welcome shown to all of us

Review collected in partnership with this hotel
This business uses tools provided by Tripadvisor (or one of its official Review Collection Partners) to encourage and collect guest reviews, including this one.
Ask eugeniov735 about Quality Hotel Flamboyant
Thank eugeniov735

We are very happy that you enjoyed your time with us.
Thank you so much for writting in the Tripadvisor´s site.
Best regards.
Roberto Ayres

Report response as inappropriateThank you. We appreciate your input.
This response is the subjective opinion of the management representative and not of TripAdvisor LLC
Marcus Vinícius P
3
Reviewed 26 November 2017 via mobile
Clean, new and comfortable

Very nice stay. Clean, comfortable room, gentle attendants, located near to the biggest shopping mall in Goiania. I liked the welcome drink, too. Certainly, one of the best cost-benefits choices, when I come back to Goiania, I would like to book again .

Thank you for writting yours impressions on the Tripadvisor site.
We are very glad that you liked your stay with us.
Best regards.
Roberto Ayres

Report response as inappropriateThank you. We appreciate your input.
This response is the subjective opinion of the management representative and not of TripAdvisor LLC
Andre O
5746
Reviewed 15 February 2017 via mobile
Worthy it

This is a new hotel in Goiânia, everything smells new. Let's go for the classifications:
Ps: close to the mall and for the runners there is a park nearby, around 2.0 km.

Check in: 9.0
Check out :9.0
Parking: 10 (one day the driver brought my car by the morning before my requested, Good service I was rushed that day)
Breakfast:10
Room cleanness: 10
Bathroom cleanness: 9.0
Internet speed: 10
Employees: 10

The hotel had just a few customer by that day, I hope not to see a decreasing quality with more customers. Congrats to the manager, so far so good. I will return.

Thank you so much for yours impressions at the Tripadvisor site. So good to know that you liked our Quality Hotel Goiânia.
Hope to see you soon!
Best regards.
Roberto Ayres