US$39
US$35
Free cancellation until 22/05/22
View deal
Booking.comUS$37
PricelineUS$39
Hotels.comUS$35
Agoda.comUS$39
TravelocityUS$35
Trip.comUS$39
View all 14 deals
Payments made by partners impact the order of prices displayed. Room types may vary.
Prices are provided by our partners, and reflect nightly room rates, including all taxes and fees known to our partners. Please see our partners for more details.
MrChris67
Perth, Australia
3

Try to get out of the main tourist areas when travelling, it just feels more authentic.
Easy check in, very spacious and well appointed roooms, 2 minute stroll to train station, and surrounded by great little local eateries.
Its always great to have a microwave as the family mart convenience stores have the best meals to heat up when in a rush or late at night, luckily this hotel has one directly underneath on the street, although the amount of top notch eateries in the local area cater for your rumbling tummy.More

Thank you very much for your stay and leaving us a review!
We are happy that you liked our hotel and enjoyed your stay.
The closest Hankyu Juso station has a very good access to Osaka center and also Kyoto area. Juso area has full of good and cheap local food and we hope you found your favorite one during your stay :) As all our rooms have kitchen with microwave, some of our guests enjoy their own time by getting some take-away food from nearby local shops or convenience store! We hope you can eat around our hotel when you come back again next time.

Report response as inappropriateThank you. We appreciate your input.
This response is the subjective opinion of the management representative and not of TripAdvisor LLC
See all 109 reviews
Payments made by partners impact the order of prices displayed. Room types may vary.
Nearby Hotels 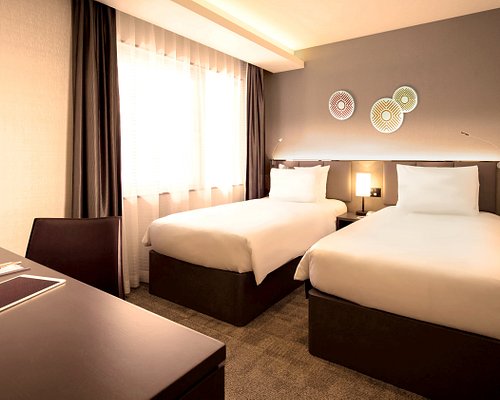 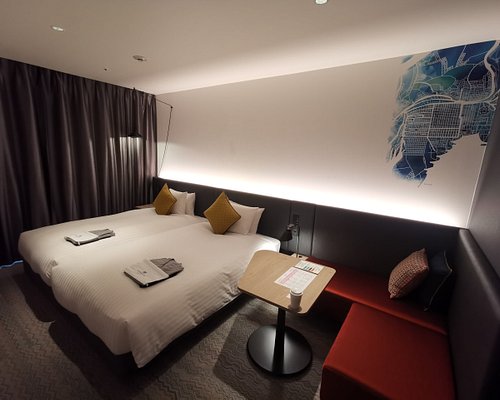 Hotels.com
View deal
Travelocity
Priceline
US$56
Expedia.com
US$59
View all 12 deals from US$56
9 reviews
2.6 km from Minn Juso
We compared the lowest prices from 12 websites 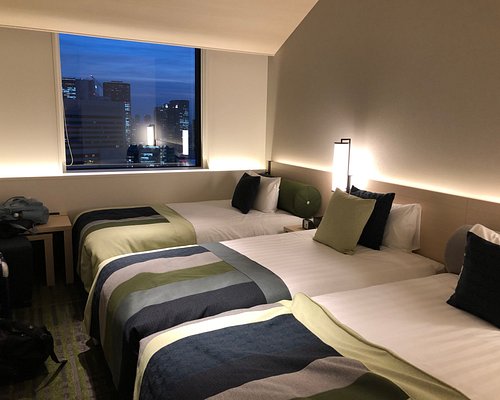 Expedia.com
View deal
Free cancellation
Pay up to 12X
Booking.com
US$129
Agoda.com
US$46
Hurb
US$138
View all 16 deals from US$46
79 reviews
2.2 km from Minn Juso
We compared the lowest prices from 16 websites
Hotel Elcient Osaka

Hotels.com
View deal
Expedia.com
US$57
FindHotel
US$43
Booking.com
US$77
View all 11 deals from US$43
5 reviews
3.1 km from Minn Juso
We compared the lowest prices from 11 websites
karaksa hotel grande Shin-Osaka Tower
US$51

Expedia.com
View deal
Free cancellation
Pay up to 12X
Booking.com
US$84
Agoda.com
US$68
Preferred Hotels
US$118
View all 16 deals from US$68
20 reviews
4.0 km from Minn Juso
We compared the lowest prices from 16 websites
Sponsored
Hot Spring from Deep Water Osaka Hinode Hotel Nipponbashi
US$103

Expedia.com
View deal
Free cancellation
Reserve now, pay at stay
Booking.com
US$88
Agoda.com
US$56
Hotels.com
US$103
View all 13 deals from US$56
68 reviews
We compared the lowest prices from 13 websites
Hotel Hanshin Annex Osaka
US$49

Expedia.com
View deal
Free cancellation
Pay up to 12X
Booking.com
US$55
FindHotel
US$45
ZenHotels.com
US$59
View all 14 deals from US$45
40 reviews
2.5 km from Minn Juso
We compared the lowest prices from 14 websites
La'gent Hotel Osaka Bay
US$102

Expedia.com
View deal
Free cancellation
Pay up to 12X
Booking.com
US$48
Agoda.com
US$34
Hotels.com
US$102
View all 14 deals from US$34
59 reviews
7.5 km from Minn Juso
We compared the lowest prices from 14 websites
Hotel WBF Hommachi
US$45

Expedia.com
View deal
Free cancellation
Pay up to 12X
Booking.com
US$39
Agoda.com
US$29
Priceline
US$41
View all 13 deals from US$29
74 reviews
4.6 km from Minn Juso
We compared the lowest prices from 13 websites
Osaka Fujiya Hotel
US$58

Warm welcome and nice service.
Room so cleanliness and have kitchen for cooking.
Good bathroom and bathtub.
But so noisy from the outside during the night time.
They did not have any HANDY PHONE anymore.
You shold be release your photo with handy phone for your all partner.
Because that's was make me disappointed so much :(

This review is the subjective opinion of a Tripadvisor member and not of TripAdvisor LLC.
LmrG2
31
Reviewed 25 September 2019
Spacious, clean apartment hotel

Room is nice and spacious. Apartment type hotel. Fridge, microwave and induction cooker are useful specially when you're staying longer. Bed is ok, pillows are rather thin. Towels will not be change unless you request it and you have to pay 500yen. There's also a cleaning charge. Toilet and bath is nice. TV channels limited and all are in Japanese. Wifi signal is strong, stayed at 5th floor. No phone in the room. No free coffee or bottled water. For trash, you need to follow the instruction otherwise they will not collect.

Location is 5-10min walk from Juso station. Many food shops and convenient stores in the area. Plenty of night clubs nearby.

Over all, will definitely stay again if in osaka.

This review is the subjective opinion of a Tripadvisor member and not of TripAdvisor LLC.
mondo9
Brisbane, Australia
1
Reviewed 24 September 2019
Good hotel. Great value.

Perfect location for my wife and I. Close to rail station and plenty of restaurants / shops. Room was clean and spacious. Kitchenette was handy to have. Great value at this price. Will stay here again.

This review is the subjective opinion of a Tripadvisor member and not of TripAdvisor LLC.
jawidj
Metro Manila, Philippines
3621
Reviewed 7 August 2019 via mobile
10 Important Things You Need To Know About Minn

Room is spacious and clean but bed is not very comfortable (spring bed) and are aligned vertically. Travellers must also know the following: (1) rooms are not cleaned daily (they charge extra for this); (2) towels are not changed daily (or pay at extra charge)(3) no free water; (4) no phones inside so if you need anything, you have to go down the lobby and speak with them; (5) front desk officers change every 4 hours or so - there are generally no endorsements made; (6) most of the officers speak very little English and some are not at all friendly; (7) toilet papers are not replenished as well; (8) food accidentally left in the room are not endorsed - and are thrown away even if you are still in the hotel (we left the hotel, checked out but left our things. When we remembered what we left and came back for our things, the food were already thrown away in less than 3 hours); (9) area is generally not kid-friendly as it is near bars; (10) policies are not explained to the guests.
The place is near Juso station (about 10 minutes walk) and food stalls - 7-11, Lawson, etc.

This review is the subjective opinion of a Tripadvisor member and not of TripAdvisor LLC.
jcrabbers
Portland, Oregon
3
Reviewed 8 July 2019
Probably good for longer stays

We only stayed one night, and that doesn't seem like the model this hotel really suits. The staff were friendly and the room was quite large, especially by Japanese standards. The area is a little seedy, as it is on the edge of a red light district, but also quite close to a residential area that's nice to walk in.

There were not many amenities outside of the kitchenette. The furniture was cheap and uncomfortable, especially the bed, and the towels were stained and scratchy. However, the shower and bath were quite nice, as was the layout, garbage, and recycling.

This hotel doesn't use normal keys, but rather uses keypad locks with unique codes for each room. We took pictures of the lock code to make it easier to remember. It definitely felt safe, which could've been a challenge given the area.

All in all, the location and amenities were average, cleanliness and furniture were below average, and staff and security were slightly above average. Would not rebook, but probably a good value for longer stays.