About "Calaloo", the restaurant in... - Review of Cerrito Tropical Eco Lodge

US$83
US$70
View deal
eDreams
Hotels.comUS$83
Booking.com
View all 11 deals
Prices are provided by our partners, and reflect nightly room rates, including all taxes and fees known to our partners. Please see our partners for more details.
Payments made by partners impact the order of prices displayed. Room types may vary.
PatrickYanez
New York City, New York
11

About "Calaloo", the restaurant in front of the beach - Taboga Island

I visited Taboga Island for the day with 15 USA college students. Instead of going to the big (tourist's) beach on the right side of the ferry exit, we walked to the left and parked ourselves on the beach in front of the restaurant Calaloo (a yellow building).

Cynthia, the owner rented chairs and umbrellas (2 chairs/1 umbrella for $15; beach towels for $5 ea.) They prepared a superb lunch for us and a refreshing sangria. We used their bathroom all day long and buy refreshments and beer. We had a great time and we highly recommend Calaloo as your home base for your beach day at Taboga Island. Call in advance to reserve chairs/umbrellas and to make lunch preparations. A lovely place for a beach day!More

Show less
Room tip: For a one beach day at Taboga Island, "Calaloo" offers a great location, rentals of chairs, umbrellas, and towels. Affordable lunch and refreshments. Suggestion call a few days in advance to make reservations, especially for large groups.
See all 129 reviews
Payments made by partners impact the order of prices displayed. Room types may vary.
Nearby Hotels 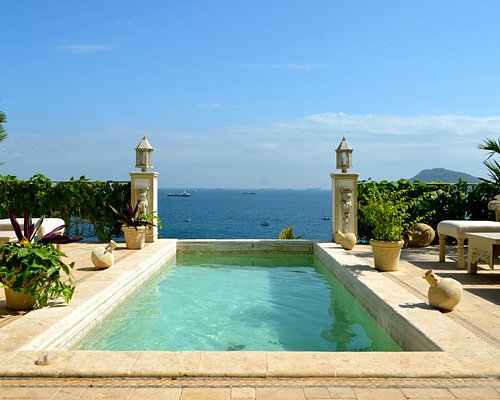 eDreams
View deal
Booking.com
Priceline
US$231
Agoda.com
View all 5 deals from US$231
144 reviews
0.1 km from Cerrito Tropical Eco Lodge
We compared the lowest prices from 5 websites 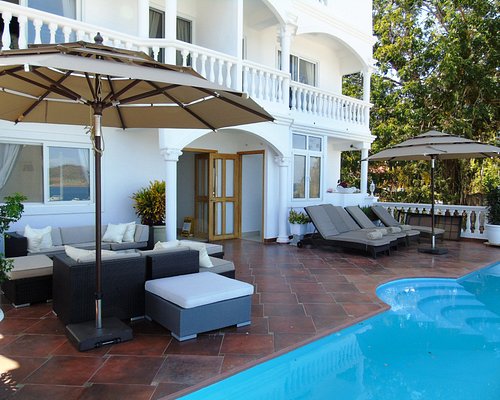 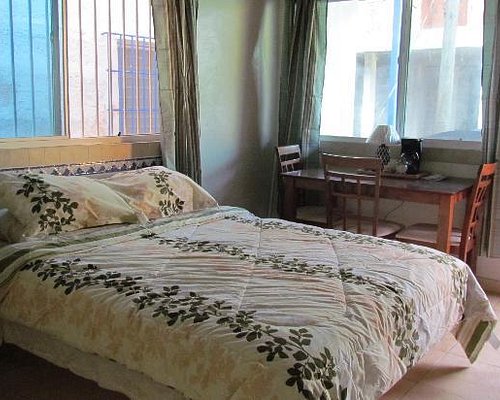 Outstanding place to stay in Taboga, will recommend the Ceritos to my friends. Very warmed and helpfull staff. The food is to die for, lots of see food and friendly atmosphere. Will come back again in the near future. I love this place and the near by beaches. Taboga is the island of the flowers .

What a great time we had with Cynthia and her attentive staff. We enjoyed one of the Mango rooms, staying on Isla Taboga for 3 nights. Our room was nice size with a private bathroom with a big shower and hot water - don't take these things for granted on an island. I would like to mention here that this IS an island. Electric is from a large diesel generation plant and water is a precious commodity, so where ever you stay and when ever you stay on an island please be conscientious with your use of each. Our room, in fact the entire hotel, was very pleasantly decorated in island colors and accents. Though there was no seaview from our room - who wants to hang out in your room when on a lovely island?! There is a very nice social area and dining area that does have a nice view of the sea. One word of warning is the Cerrito B & B is located on the upper tier of town and it is a steep walk, though a cab brought us from the dock with my many bags and beach unbrella. Just keep this in mind if you have trouble walking or getting around. Me, I liked the exercise - a few trips up and down to the hotel and I am allowed dessert that evening :-) This is a charming and affordable place to stay with a great staff. The pics I have included are of the social /common areas, sorry our room is too livied in so no pics there, but a very nice room! If you are coming to Isla Toboga I would highly recomend Cerrito Tropical - you will have a wonderful time!

This review is the subjective opinion of a TripAdvisor member and not of TripAdvisor LLC
John k
Winnipeg, Canada
22
Reviewed 30 January 2013
wow! Awesome

My wife and i have been Panama travellers for 4 years. this was our first visit to Taboga. Cerrito was an excelelnt choice and we enjoyed it very much. Cynthia looked after all the booking and her associate Lynn was on site and an excellent ambassador for Cerrito and taboga. The staff was very helpful in servig us delicous meals and lookied after our drink needs. Make sure you bring good walking shoes if you are going hiking around and as others have said, Cerrito is up a steep two block road. If you are in Panama, take a day or two and go enjoy Cerrito and the island for such. We will ber going back next year for sure
Marg & John

This review is the subjective opinion of a TripAdvisor member and not of TripAdvisor LLC
Calgary68
Calgary, Canada
117100
Reviewed 28 January 2013
This was ranked #1???

If it weren't for the efforts of the staff, this place would have rated but a single star. And while the small staff tried hard to please, it was apparent they weren't given any direction by what I would loosely describe as "management". I had originally chosen the Cerrito because (a) it received the #1 ranking (of 2) and (b) it is supposedly run by fellow Canucks. It has been our experience when travelling to less-developed countries, hotels run by ex-pats generally have a higher level of service than locally-run hotels. Not because ex-pats are any smarter, rather, they generally have had greater exposure to service levels in more developed countries. One hopes that that exposure translates into better service and amenities. Not here, it didn't.

This B&B's location, well up the side of a steep hill, is quite scenic, although somewhat blocked by a building directly below. That's the good part.

We were offered, and accepted, bottled drinking water, as "you can't drink the tap water here", we were told. What we were NOT told, until we had dinner on our last (of two) nights, that all the water we drank while there was $2 a bottle. "It's because it has to come by boat" we were told. So does the (same) water at the little grocery store below, which costs 75 cents. That the water cost us $2 a bottle was not the issue. That we were NOT TOLD there was a cost attached WAS.
Other than when I was backpacking as a kid, I've never had any accommodations where the room was not serviced on a daily basis. Neither of our two rooms (there were 4 of us on this trip) was cleaned or serviced in any way. (No beds made, no trash baskets emptied, no floors swept.)
Add to that, the air conditioner (which did work) sounded like a semi going by, the coffee maker worked only when you held the "on" button on and the ceiling fan in the bedroom was inoperative. It's not that we were "special": our neighbouring room suffered the same shortcomings.

I've attached a couple of photos of the level of maintenance as practiced by The Cerrito.

Considering the cost attached to the accommodation, this ranks very low, indeed.

Thank you for your review and the opportunity to correct what in your view we are lacking.
A review, whether good or bad is a great way for us to improve.

We would appreciate knowing if you are having a problem at the time of your stay so we can attempt to correct the issue and improve your time on Isla Taboga.

We are a locally run Bed and Breakfast and pride ourselves with being sustainable as much as is possible on the island. Cerrito Tropical is run by local people, and they are friendly doing their best to serve you. This enhances the local experience in our view.

We are not always on site as we have an office in Panama which is clear in our site and emails, and we leave our local manager to handle issues. We apologize if they were not at their best.

We do have a special filter on the main level kitchen/bar tap which cleans the water. Many people do choose to use the water from this tap and it is accessible 24 hours a day. The water we are supplied with is from a town well and on the island the water is not treated to a North American standard therefore we always recommend bottled water. The bottled water prices are posted on the bilingual menu available in the restaurant/café area.

We apologize if you were not told this, or noticed this when ordering from the menu.

On our website it states that rooms are serviced twice a week and if you wish more it is our pleasure, you simply have to request it. Many guests do not want staff entering their rooms when they are not there. It is your choice.

Also if you had a problem with the air conditioner and fan we would have appreciated being told so we could call the repairman and we also would have offered you a different room.

We appreciate the maintenance comments and everything has been maintained.

Thank you for your review and we only wished to have heard about your issues when you were staying with Cerrito Tropical so we could have attempted to correct them.

Report response as inappropriateThank you. We appreciate your input.
This response is the subjective opinion of the management representative and not of TripAdvisor LLC
MarinaSchoon
Salmon Arm, Canada
4258
Reviewed 14 January 2013
Great Lunch

We only spent a day on the island but enjoyed a wonderful lunch at the B & B. It was very relaxing - great food and amazing views. The owner (Cynthia) was there as well and we had a great visit. Taboga is a lovely island - fun to walk around - beautiful flowers and a great beach.We took the ferry there and back.