ZenHotels.com
Prices are provided by our partners, and reflect nightly room rates, including all taxes and fees known to our partners. Please see our partners for more details.
Payments made by partners impact the order of prices displayed. Room types may vary.
Asalemal
Dubai, United Arab Emirates
49

There are many better choices

Looks like really old resort and warndown. Must go in weekends only where in weekdays its like ghost time you canot see many tourists there. Even the one bedroom has a terrace you cant cook outside or make fire which is not allowed.room have smell and furniture havent changed in decades. You have to bring your own shampoo otherwise u call the office to bring you some.The horses in bad condition and the peacock poops everywhere has to be cleaned after daily which is not really.the staff dont have experience to deal with customers and no buffet breakfast and its kind of blant.not much activities you can do. I would prefere hotels inside the city center .More

Expedia.com
View deal
Hotels.com
ZenHotels.com
US$117
Travelocity
View all 17 deals from US$117
464 reviews
47.8 km from Al Bada Hotel and Resort

Expedia.com
View deal
Hotels.com
ZenHotels.com
US$122
Travelocity
View all 15 deals from US$122
222 reviews
17.6 km from Al Bada Hotel and Resort
We compared the lowest prices from 15 websites 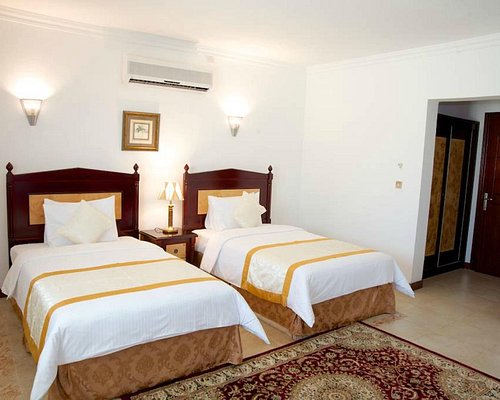 Expedia.com
View deal
Hotels.com
ZenHotels.com
US$128
Travelocity
View all 16 deals from US$128
2,237 reviews
19.4 km from Al Bada Hotel and Resort

All you can say stay in luxurious home with parking inside the villa and swimming pool on the back.
Horse riding and paintball was the real fun.
Only one thing really not good was the food
Very less variety of food, better keep some of the raw food with u so u can cook some better food as per your choice.

This review is the subjective opinion of a TripAdvisor member and not of TripAdvisor LLC
rashidalharmoodi
Sharjah, United Arab Emirates
4867
Reviewed 17 November 2017 via mobile
Needs A LOT to improve

The hotel needs a lot of investments and improvements to reach to guests satisfaction level.

My basic review to the hotel as the below..
1. The hotel rooms are in a very good size.
2. The hotel doesn’t have any international standard or management standard, for any request the hotel managements has to call the hotel owner for his advice.
3. The rooms furniture in very normal standard as may of 3 starts hotels has better finishing.
4. The hotel is around 30 min drive distance from Al Ain City.
5. The only 2 activities for the hotel are
a. The swimming pool
b. Tent leasing which not recommended at all as the tents are too old plus the leasing rate for few hours equals to 60% of buying a new one.
6. The poorest breakfast buffet I have seen in my life.
7. The is not pushing you to stay in (spend & enjoy) the hotel.
8. There is no enough security for the hotel as anyone one can enter and leave without seen.

This review is the subjective opinion of a TripAdvisor member and not of TripAdvisor LLC
inderdeepb
Dubai, United Arab Emirates
64
Reviewed 22 September 2017 via mobile
Holiday

Very nice place, peace and calm,
Good for family
Villa was excellent
But
Very poor service by staff
Expired product
Bath tub was dirty and broken
They gave us complimentary chocolate biscuits but that was also too smelly.

This review is the subjective opinion of a TripAdvisor member and not of TripAdvisor LLC
roberthuls
Greater Newcastle, Australia
11
Reviewed 7 May 2017
Heaven in the desert

Just amazing holiday we just enjoyed every singl day we been ther and we hope to come Bach next years ..... The staff was just excellent service helpful and friendly we speak we them in English because all of them have good cnowelege and good English ..... The swimming pool wonderful special was really hot in we been all the day like fish in the water ....

This review is the subjective opinion of a TripAdvisor member and not of TripAdvisor LLC
RottiPerth_Australia
Perth, Australia
2113
Reviewed 1 March 2017
Underwhelming

We bought the groupon voucher which included free breakfast and pizza and a few other things. The hotel looks old and tired. It also felt like a bit of a ghost hotel since we were 1 of 10 guests at the hotel. Grass was long and needed a cut, it just didnt have a resort feel at all.

The good:
- you can park your car directly in front of your villa
- the villa is quite spacious with separate sitting/dining room and bedroom
- wifi actually worked and was quite good
- they provide starbucks coffee with our breakfast which was quite good.
- the lady at the reception offered us a cot and it was promptly delivered.
- the breakfast included was quite generous - eggs, bowl of nice mixed berries and a generous basket of baked goods.

the Bad
- our package entitled us to 2 pizzas of our choice. That choice was chicken or chicken. They had run out of all the other flavours!? BTW these pizzas come straight out of a box from the freezer.
- we were given 2 vouchers for a 15 foot massage. Females could only avail this offer from 12 -1pm (yes 1 hr timeslot) because after 1pm it was males only. CRAZY!
- we had the quests from hell next to us (why they were next to us when they had so many other vacant rooms is beyond me.) At 9pm they were moving furniture talking so loud we could hear every word from our villa and playing loud music. This lasted for 15 minutes which was fine until 12am when we were woken up the sound of reeving engineers, car brakes screeching and lots of shouting. some 20 cars were now parked outside our villa. We stayed in the villa which is within 30metres of the guarded main gate so how this was allowed to happen I have no idea. My husband had to call the front desk threatening to call the police unless they put a stop to this. Thankfully they did and 5 mins later all was back to normal. Still - this should NEVER have happened in the first place
- the kitchen whilst sizeable contains very limited cutlery/pots/pans/plates etc. if you have more then 2 people you would be sharing! Also, unless you came prepared with your own supplies, the nearest supermarket we were told was 10mins drive away and there is no ability to buy supplies such as milk or eggs from the resort.
- the restaurant was completely closed - so unless u wanted room service there was no other option within the resort and after the pizza - frankly i don't know that I would order anything from room service
- the room service is extremely slow. we had ordered our pizzas at 5 asking them to be delivered by 6. by about 6.20 we called up "oh we are 5 mins away". 15 mins later the food arrived and the pizza was still slightly chilled in the middle. I would hate to know what the delivery service will be like when they are full.

We paid 449AED plus another 114 in taxes and quite frankly, I could say I felt like i got my money's worth.

It was so cold we never took our daughter to the children's play ground so I cannot make any comments about that.

This review is the subjective opinion of a TripAdvisor member and not of TripAdvisor LLC
View more reviews
PreviousNext
12…
<script type='text/javascript' crossorigin='anonymous' async onerror='__scriptLoadError(this,true);'