StayForLong
Agoda.com
Destinia.com
Prices are provided by our partners, and reflect nightly room rates, including all taxes and fees known to our partners. Please see our partners for more details.
Payments made by partners impact the order of prices displayed. Room types may vary.
182chenf
3543

Stay in Great palace hotel for 2 nights. There's a street selling fruits and veg opposite the hotel. The bed is clean and firmed. Room is pretty spacious. Tolietries are in placed. Other than its breakfast,it a good hotel to stay in.

Trip type: Travelled with friends
See all 52 reviews
Payments made by partners impact the order of prices displayed. Room types may vary.
Nearby Hotels 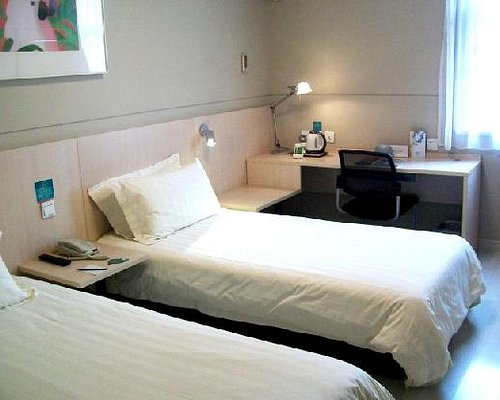 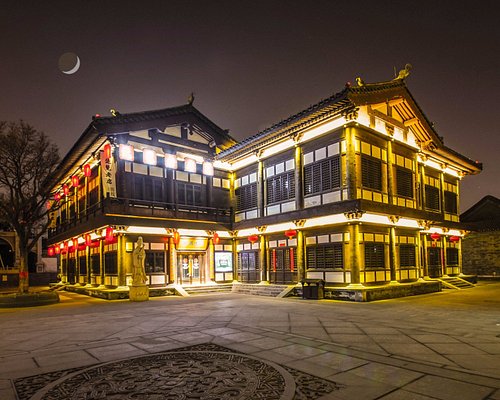 Hotels.com
View deal
Orbitz.com
FindHotel
US$21
Priceline
US$26
View all 14 deals from US$21
57 reviews
2.2 km from Datong Great Palace Hotel
We compared the lowest prices from 14 websites

Datong has been bitten by the tourist bug and is pulling all stops out to shake off its gritty coal mining legacy and rebuild (literally) its historical heritage. Unfortunately, the accommodation scene is yet to catch up. There is not a wide choice above the bottom of the spectrum and whilst the Grand Palace has evident pretensions the outcome falls short of expectations. It’s not an altogether poor place to stay but neither is it very good so that marks it out as average. But only average for where it is, elsewhere it would be poor.

The good: our suite was spacious, reasonably clean and adequately comfortable. The king bed was firm but otherwise comfortable. The sheets were crisp and clean and there were enough pillows for each of us to find a favourite. All the expected amenities were there and some of them worked as expected. Read on for those that didn’t. The bathroom was well supplied with toiletries and the water supply was hot, strong and reliable. There were plenty of well-located power outlets around the suite to service our needs. The included wifi worked fine on all of our devices. The included breakfast served in a wedding-banquet style hall that almost requires a map and compass to find (otherwise follow the bus tours groups) is a good quality buffet of Chinese-only choices. Cutlery is limited to chopsticks & spoons which means that the soft poached eggs can be challenging to eat with any dignity.

The bad: there is precisely no English at reception or elsewhere among the staff. For a suite the bathroom was miniscule and would be very small even in a standard hotel room - and the shower cubicle followed suit. Same shower cubicle had water leaks before either of us had taken a shower and they just got worse after we had. The rest of the bathroom was the worse for wear and took its design cues from the remainder of the suite. The style of the guest room corridors is dark and sombre and that theme is carried into the guest rooms. The room décor and furnishings hail from some unloved era in the last century and the carpets and soft furnishings were marred by stains and damage. Indeed, it’s hard to imagine any part of the guest rooms surviving any sort of makeover. The sound of water rushing through pipes thrummed through the walls of the entire suite during our stay. The refrigerator is locked and if you want a key then you need to pay an extra deposit to cover the cost of all the minibar contents which – along with the rest of the room/suite – will be diligently audited on checkout before custody of your deposit is released. The door of the refrigerator cabinet appeared to be dangling precariously from one hinge but on investigation this proved to be an ad hoc remedy to prevent the machine cooking in its own self-created sauna.

The ugly: other Tripadvisor contributors have complained about the heat in their rooms. Well the outside temperature during our October stay was hovering between 0 to 5 degrees C whilst the room temperature was 26 degrees C and nothing we could do to the AC would reduce it. In the end we turned the AC off and opened the window to render the suite habitable. Even then the room temperature never subsided to a comfortable level. The in-room safe is of the portable variety which means you can take out it with you – as can anybody else.

This review is the subjective opinion of a Tripadvisor member and not of TripAdvisor LLC.
ivanoew
Hong Kong, China
3929
Reviewed 22 July 2016 via mobile
The housekeep washed my socks.

Spent 2 nights here and was so glad to find a spacious room, clean comfy bed and a good shower. I was a little miffed they didn't provide complimentary bottled water...but they more than made up for it with the very thoughtful housekeeping...to the extent of washing the pair of socks I had left beside my sneakers. Impressed.

This review is the subjective opinion of a Tripadvisor member and not of TripAdvisor LLC.
PablosXanderpants
Victoria, Canada
9824
Reviewed 27 July 2015 via mobile
Met expectation

One thing we liked is the breakfast. It's more on the Chinese side but the taste was very delicious and authentic. Datong's food is well known and our breakfast confirmed it. Recommend the daoxiaomian, among many others. The room was nice and the price was very affordable with breakfast included.

This review is the subjective opinion of a Tripadvisor member and not of TripAdvisor LLC.
AniaP387
Lomianki, Poland
6741
Reviewed 1 April 2015
Good but...

Good price for nice familly room with breakfast included but no one at the reception speaks english! So you won't get any help here. We gave our reservation all was there (2 room for 2 nights, dates) first night was OK just to hot in the rooms - there was no way to lower temperature. Next day after we came back to hotel rooms were locked. Hotel checked us in only for one night... We hade to go down, try to explain for next 15 minutes, pay extra deposit for the next night. It's not easy whe you are with children.

This review is the subjective opinion of a Tripadvisor member and not of TripAdvisor LLC.
PatriciaTasca
Belo Horizonte, MG
2610
Reviewed 16 March 2015
Lack of communication

We stayed for 3 nights and most of the staff doesn't speak english. We tried to order food but the room service attendant didn't speak english. Until we found the customer relationship manager Victor, we had a hard time trying to communicate at the hotel. But Victor was very helpful in every little thing. We need to go to a supermarket, he got the cab, told him to take us there an wait for us. From that day on, everything we needed Victor was there to help. So if you go to Datong, look for him. He was very pleased to have an opportunity to practice.

This review is the subjective opinion of a Tripadvisor member and not of TripAdvisor LLC.
View more reviews
PreviousNext
123…
<script type='text/javascript' crossorigin='anony