The Westin Playa Bonita Panama
6 people are viewing this hotel

US$214
US$133
View Deal
SAVE US$81
eDreamsUS$177
TravelocityUS$177
Prestigia.comUS$214
View all 16 deals
Prices are provided by our partners, and reflect nightly room rates, including all taxes and fees known to our partners. Please see our partners for more details.
Payments made by partners impact the order of prices displayed. Room types may vary.
Jmflucus
Atlanta, Georgia
64114

The grounds on this resort were beautiful. The pools were very nice and the wait staff was super attentive. We stayed in an executive suite which was large and very nice. The view overlooking the pools and beach was nice. The executive lounge was also a great bonus benefit. Only downfall of this resort was its isolated. You would need taxis or car rental to explore other parts of Panama.

Trip type: Travelled with friends
See all 4,791 reviews
Payments made by partners impact the order of prices displayed. Room types may vary.
Nearby Hotels 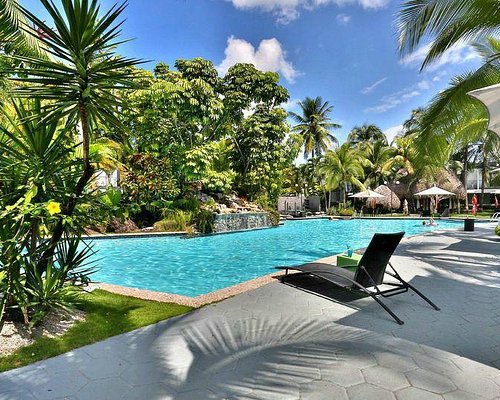 Hotels.com
View Deal
Free cancellation
Pay up to 12X
Expedia.com
US$69
eDreams
US$69
StayForLong
US$75
View all 14 deals from US$69
772 reviews
7.7 km from The Westin Playa Bonita Panama
We compared the lowest prices from 14 websites
Hilton Panama
US$188
US$167

Hotels.com
View Deal
Free cancellation
Pay up to 12X
Booking.com
US$167
Expedia.com
US$167
Prestigia.com
US$188
View all 17 deals from US$166
2,183 reviews
7.1 km from The Westin Playa Bonita Panama
We compared the lowest prices from 17 websites
Top Rated
Wyndham Panama Albrook Mall Hotel & Convention Center
US$120

The location of this hotel is fantastic. We were close enough to the city to be able to go in for dinner or lunch or exploring but far enough away to feel like we were in the middle of nowhere.
The pools were great and being directly on the beach, even though it isn’t the prettiest beach (when you are used to the Caribbean), was very nice. The grounds are just beautiful.
The food was ok and our suite was not as clean as I would have liked and a bit aged but overall I would stay here again. It seemed like the majority of the staff does not speak much English and I don’t fault them for this at all- but knowing a little Spanish goes a long way.

This was one of the worst experiences at a hotel in recent memory. It killed a weekend meant to celebrate a friends wedding and relax.

1. Most the staff did not speak English: We had to communicate with the valet through her phone on a translation app. When we requested a cab it was clear she was texting them and quoted ridiculously high prices we ended up having to negotiate each time.

2. None of the house keeping staff spoke English and as a result my room was only cleaned once in 4 days.

3. Hostess at restaurant, no English. Used a phrase written down that said " the buffet is $32.00 and does not include drinks" we were seated at 10:15pm. After starting our first plate of food the waitress walked over and informed us they were breaking down the buffet. We were not told this or we would of not eaten there.

4. Requested seaside view and ended up with a "jungle" view. The second day my room smelled so bad of mildew I had to ask to be moved.

5. Our first day at the pool we were told by a camera crew shooting a corona commercial that we were not allowed in certain areas of the pool/poolside area.

6. I had a friend come in on an early flight who arrived at 5am. We planned to have breakfast and head over to the other resort to help set up for the wedding. The security gate refused her access, I was told an extra guest fee was $150.00 and unless I agreed they would not let her in the gate. I argued she was coming for breakfast in preparation for a wedding and not staying at the hotel. They refused and literally held her hostage until I signed a form and agreed to pay $150. She had to walk up a long road/hill to the hotel. It was incredibly embarrassing. Several other friends at the hotel had guests from other hotels come through at different hours of the night/early morning with NO issue. I informed the manager upon checking out and ended up having to argue with her for 20 mins to have the $150 refunded.

This left a bad taste for the entire Marriott brands as they’ve yet to follow up with any resolution or simple apology. Stay away, better options closer to the hot spots.

Highly recommend the hotel next door or hard rock downtown.

This review is the subjective opinion of a TripAdvisor member and not of TripAdvisor LLC
Christa G
Denver, Colorado
133
Reviewed 14 April 2020
Shortened stay because of Covid-19

We were scheuled to be there a week but our stay was shortened by 4 days. During our three days we had a very enjoyable stay. The room was excellent, the breakfast and evening buffets were very enjoyable and filling. The settings were small enough that we got to know several of the families as we shared our meals. Because there were many outdoor pools crowding was never an issue.

This review is the subjective opinion of a TripAdvisor member and not of TripAdvisor LLC
Sundancer93003
Ventura, California
402161
Reviewed 23 March 2020
Simply Amazing!

We stayed here for two nights as part of a Caravan tour. It was all inclusive. The buffet meals were very good. The staff all were friendly and helpful. The multiple pools were so nice for swimming. The beach was lovely but quite windy. The room was very clean and comfortable.